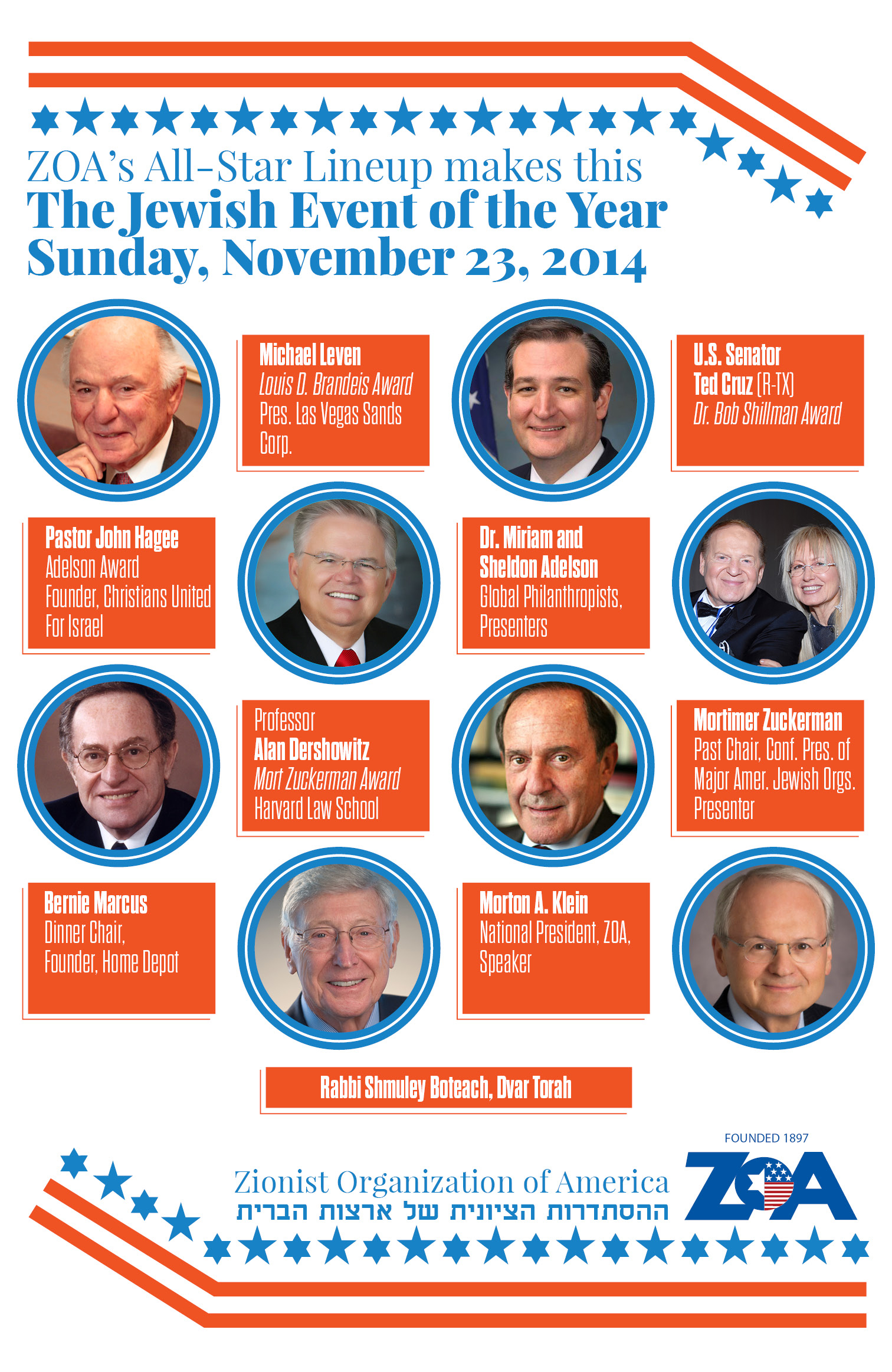 We are pleased and proud to inform you that we will be having our ZOA National Brandeis Award Dinner on Sunday night November 23, 2014 (Cocktail party: 5 PM; Dinner 6 PM) at the Grand Hyatt Hotel in New York City.

The Louis Brandeis award will be presented to Mr. Mike Leven, a word-class businessman, who is president and chief operating officer of the Las Vegas Sands Corp. He is also chairman of Birthright and has been active in Jewish Federations. Leven was formerly President of the Days Inn Corporation. He serves on the Boards of Tufts University, Boston University, among others.

Receiving the prestigious Sheldon and Dr. Miriam Adelson award will be Pastor John Hagee, Founder and Chairman of Christians United for Israel (CUFI), the largest Christian Zionist group in the country. Pastor Hagee is pastor of the mega-church Cornerstone Church in San Antonio, Texas which has 20,000 active members. He is the President and CEO of John Hagee Ministries, which telecasts his national radio and television ministry carried in the United States on ten television networks, including 62 high-power stations aired to more than 150 million households. He is also one of the greatest orators in America.

The renowned global philanthropists Sheldon and Dr. Miriam Adelson will be at the Dinner in person to present the award.

Also speaking and receiving the Dr. Bob Shillman award will be U.S. Senator Ted Cruz (R-TX). Senator Cruz is one of the greatest friends Israel has in Congress. Cruz is the first Hispanic to hold that office in Texas. He is one of three Hispanics in the U.S. Senate. He served as Solicitor General of Texas from 2003 to May 2008. Cruz served as the director of the Office of Policy Planning at the Federal Trade Commission, and Associate Deputy Attorney General at the United States Department Justice, and as a Domestic Policy Adviser to U.S. President George W. Bush. Cruz graduated cum laude from Princeton University with a Bachelor of Arts degree from the Woodrow Wilson School of Public and International Affairs in 1992. While at Princeton, he competed for the American Whig Cliosophic Society’s Debate Panel and won the top speaker award at both the 1992 U.S. National Debating Championship and the 1992 North American Debating Championship. In 1992, he was named U.S. National Speaker of the Year and Team of the Year (with his debate Partner, David Panton). Cruz was also a semi-finalist at the 1995 World Universities Debating Championship, making him Princeton’s highest-ranked debater at the championship. Princeton’s debate team later named their annual novice championship after Cruz.

Another special guest who will speak and present the Shillman award to Senator Cruz is Professor Alan Dershowitz, the Felix Frankfurter Professor at Harvard Law School. Dershowitz has been involved in several legal cases and is a commentator on the Arab Israeli conflict. As a criminal appellate lawyer, he has won 13 of the 15 murder and attempted murder cases he has handled, and has represented a series of celebrity clients, including Mike Tyson, Patty Hearst, and Jim Bakker. His most notable cases include his role in 1984 in overturning the conviction of Claus von Bulow for attempted murder of his wife, Sunny, and as the appellate adviser for the defense in the O.J. Simpson murder trial in 1995. A political liberal, he is the author of a number of books about politics and law, including Reversal of Fortune: Inside the von Bulow Case (1985), the basis of the 1990 film; Chutzpah (1991); Reasonable Doubt: The Criminal Justice System and the O.J. Simpson Case (1996); the best-selling The Case for Israel (2003); Rights From Wrongs: A Secular Theory of the Origins of Rights (2004) and The Case for Peace (2005). He attended Yale Law School, where he was editor-in chief of the Yale Law Journal, and graduated first in his class with a Bachelor of Laws (LL.B.) in 1962. (I might add both Senator Cruz and Professor Dershowitz are magnificent speakers.)

Giving the Dvar Torah will be Rabbi Shmuley Boteach, named as one of the top ten influential Rabbis in America by Newsweek Magazine.

We are proud to have as our Dinner Chair Bernie Marcus, extraordinary businessman and founder of the National Retail Chain, Home Depot. Marcus himself is a major supporter of Israel. Mr. Marcus was inducted into the U.S. Business Hall of Fame in 2006. Marcus was awarded the Others Award by Salvation Army, its highest honor. Marcus is currently chairman of the Marcus Foundation, whose focuses include children, medical research, free enterprise, Jewish causes and the community. He is on the Board of Directors and an active volunteer for the Shepherd Center. His main focus is in providing care for war veterans with traumatic brain injuries. In 2012, Marcus was awarded the William E. Simon Prize for Philanthropic Leadership.

We are also proud to have as our co-dinner, Ms. Cherna Moskowitz, wife of Dr. Irving Moskowitz. Ms. Moskowitz and her husband have been extraordinary philanthropists in the Jewish and pro-Israel world. They have supported major projects in Judea and Samaria, Ariel University (naming a school there) and the ZOA among others. They have also established the “Moskowitz Prize”, which is given annually to an Israeli who has made a major and positive impact on Israel.

Please mark your calendars and be sure to attend and experience this extraordinary event. Come and mingle with and come and see and hear these world famous activists and leaders. You will learn so much. You will meet other ZOA activists for Israel. And you’ll enjoy, enjoy, enjoy.