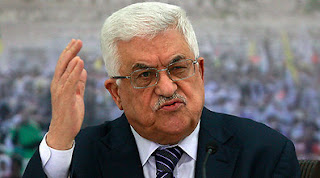 Palestinian President Mahmoud Abbas blasted Hamas Politburo Chief Khaled Mashaal for asserting that his group will never recognize Israel, hinting that the statement hinders the chances of the two-state solution, according to the Turkish newspaper Hurriyet.

“I don’t agree with Khaled Mashaal’s statement on the non-recognition of Israel because we, in fact, recognized it in 1993,” Abbas told reporters in Ankara at the conclusion of a two-day visit. “A four-article agreement between (Fatah and Hamas) stipulates a two-state vision. And Mashaal approved of this agreement.”

So what is this four-article agreement that Hamas signed that accepted a two-state solution?

Apparently, it is not the 2011 Cairo agreement, which has five articles, but it is the 2007 Mecca national-unity agreement between the two.

Here is the full text:

Based on the generous initiative announced by Saudi King Abdullah Ben Abdul Aziz and under the sponsorship of his majesty, Fatah and Hamas Movements held in the period February 6–8, 2007 in Holy Mecca the dialogues of Palestinian conciliation and agreement and these dialogues, thanks to God, ended with success and an agreement was reached on the following:

Second: Final agreement to form a Palestinian national unity government according to a detailed agreement ratified by both sides and to start on an urgent basis to take the constitutional measures to form this government.

Third: to move ahead in measures to activate and reform the PLO and accelerate the work of the preparatory committee based on the Cairo and Damascus Understandings.
It has been agreed also on detailed steps between both sides on this issue.

We gladly announce this agreement to our Palestinian masses and to the Arab and Islamic nation and to all our friends in the world. We stress on our commitment to this agreement in text and spirit so that we can devote our time to achieve our national goals and get rid of the occupation and regain our rights and devote work to the main files, mainly Jerusalem, the refugees, the Aqsa Mosque, the prisoners and detainees and to confront the wall and settlements.

Apparently, Abbas is claiming that the fourth paragraph binds Hamas to existing PNA laws which implicitly accept Israel (it is the PLO that accepted Israel, that is out of the scope of what the PA can do.)

This agreement has been abrogated numerous times since it was signed, and in fact the Hamas uprising that cut Gaza off from the West Bank – with scores killed – occurred only a few months after this agreement.

Obviously, Hamas never interpreted this agreement, nor the Cairo agreement, the way Abbas pretends they do. Hamas has explicitly and repeatedly stressed that it will never accept Israel’s existence.

So which do you believe – a strained interpretation of intentionally vague language that doesn’t even mention anything about a two-state solution or Israel itself, of Hamas’ explicit daily threats to destroy Israel?

The entire purpose of Abbas’ lies is to try to convince the West that the split between the two parties is nothing, really, and that they are really unified.

In fact, if they agree on anything, it is that Israel must be destroyed – they just disagree on the timing and tactics. (And sometimes, Fatah leaders seem to agree more with Hamas on even those.)

We would love to hear from you! Please fill out this form and we will get in touch with you shortly.
Trending Z
News December 13, 2012
ZOA Condemns U.S. State Dept. & U.S. Amb. Nides For Siding with Antisemitic, Discriminatory Palestinian & Hamas Terrorists re: the Temple Mount, Violating Jews’ Religious Freedom
News December 13, 2012
ZOA’s Klein JPost Op-Ed: There is Nothing Extreme About Israel’s New Government
Uncategorized December 13, 2012
FLASH: ISRAEL-JORDAN PEACE TREATY (1994) GUARANTEES JEWS ACCESS TO THE TEMPLE MOUNT – LET MY PEOPLE PRAY
Uncategorized December 13, 2012
ZOA Analysis: Most American Rabbis Who Are Boycotting Some Israeli Ministers Are From Extremist Left Wing Groups (J Street; T’ruah; JVP)
Center for Law & Justice
We work to educate the American public and Congress about legal issues in order to advance the interests of Israel and the Jewish people.
We assist American victims of terrorism in vindicating their rights under the law, and seek to hold terrorists and sponsors of terrorism accountable for their actions.
We fight anti-Semitism and anti-Israel bias in the media and on college campuses.
We strive to enforce existing law and also to create new law in order to safeguard the rights of the Jewish people in the United States and Israel.
Our Mission
ZOA STATEMENT
The ZOA speaks out for Israel – in reports, newsletters, and other publications. In speeches in synagogues, churches, and community events, in high schools and colleges from coast to coast. In e-mail action alerts. In op-eds and letters to the editor. In radio and television appearances by ZOA leaders. Always on the front lines of pro-Israel activism, ZOA has made its mark.
Connect with us
Sign up for our Newsletter