Here is how Palestine Press Agency reports the shooting of a 17-year old in Hebron yesterday:

When a child is born no one knows what will happen to him from the hassles and difficulties of life, but the most beautiful thing is the feeling that Allah has prepared for martyrs who believed in their covenant with God.

This is what happened with the young Muhammad Ziad Awad Salamiyah, 17, of the city of Hebron, when an Israeli soldier with no concept of humanity and whose vocabulary is filled with hatred shot the martyr Salamiyah near the Ibrahimi Mosque on Wednesday to receive the martyr certificate while smiling as he was at birth.

The martyr, according to the statements of those close to him, was going to buy sweets to celebrate his birthday, carrying with him a lighter pistol, but Israeli hatred did not differentiate between reality and illusion and their goal is to kill by any means and with any justification.

The Palestinian president strongly condemned the crime and accused Israel of trying to drag the region into a spiral of violence by killing innocent and defenseless of our people.

Salamiyah in fact pulled out the fake pistol and threatened the soldiers with it.

Here is a photo of the pistol: 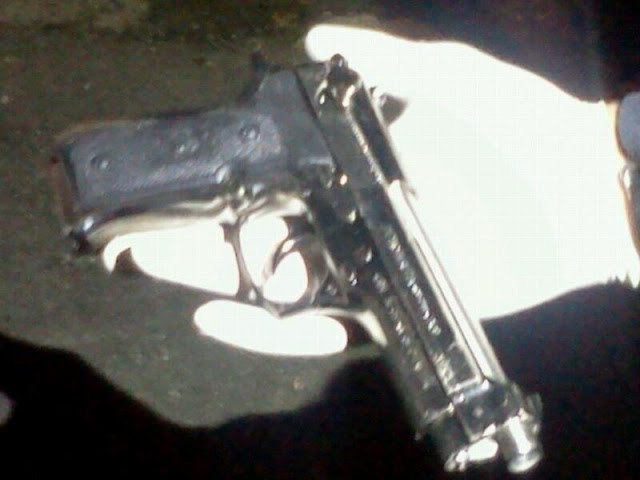 The only question is – was Salamiyah a complete idiot for pulling this out in front of soldiers who have been subject to daily attacks , or was he actively looking for martydom as a birthday present?

While the death is tragic, the gene pool is a little better today.

UPDATE: No, it wasn’t stupidity – it was terror:

The officer, a 20-year-old from Tel Aviv, recounted the events in interviews with Israeli media late Tuesday night, saying that she and two border police soldiers under her command were manning a checkpoint near the Cave of the Patriarchs when the young Palestinian approached them.

“Following the standard procedure, the soldier who was with me asked him for an ID,” she said. “The Palestinian handed him his documents and I entered the room to run a background check.”

While inside, she continued, she looked out and saw that the Palestinian had charged the soldier and drawn what appeared to be a pistol.

“With one hand,” she related, “he grabbed the soldier’s neck and pressed against him, and with the other he put the pistol to the soldier’s temple. In that situation, the soldier couldn’t break free or react.”

The female officer, who was only a few meters away, cocked her weapon.

“I was looking for an angle from which to fire without hurting the soldier,” she said, and it was only after she ascertained that his life was in danger that she pulled the trigger.

“After the first shot, he continued to hold the pistol to the soldier’s temple, so I fired two more bullets,” she said, at which point the Palestinian fell to the ground, and she quickly kicked the gun away.

“It was my first time in a combat situation,” she said, explaining that she had reacted “exactly like I was taught.”

With a gun being held to the soldier’s head, there was no way she could fire a warning shot, the officer said. “My subordinate’s life was in immediate danger,” and it was important to fire without hitting him, she said.

She rebutted the notion of her being a hero, saying: “Any soldier in my position would have done the same.”

We would love to hear from you! Please fill out this form and we will get in touch with you shortly.
Trending Z
News December 13, 2012
ZOA Deplores that Pres. Trump Dined with Jew-Haters Kanye West & Nick Fuentes, and Demands he Condemn Them
Uncategorized December 13, 2012
ZOA Honors Trump With Rarely Given Herzl Award for His Great Pro-Israel Work – Joins Ranks of Balfour, Truman, Begin, Meir, Ben-Gurion
News December 13, 2012
ZOA Responds to Questions About Pres. Trump, Kanye West, Fuentes, etc. Issue
Uncategorized December 13, 2012
Zionist Organization of America Honors Donald Trump for Support for Israel, Jewish Community
Center for Law & Justice
We work to educate the American public and Congress about legal issues in order to advance the interests of Israel and the Jewish people.
We assist American victims of terrorism in vindicating their rights under the law, and seek to hold terrorists and sponsors of terrorism accountable for their actions.
We fight anti-Semitism and anti-Israel bias in the media and on college campuses.
We strive to enforce existing law and also to create new law in order to safeguard the rights of the Jewish people in the United States and Israel.
Our Mission
ZOA STATEMENT
The ZOA speaks out for Israel – in reports, newsletters, and other publications. In speeches in synagogues, churches, and community events, in high schools and colleges from coast to coast. In e-mail action alerts. In op-eds and letters to the editor. In radio and television appearances by ZOA leaders. Always on the front lines of pro-Israel activism, ZOA has made its mark.
Connect with us
Sign up for our Newsletter