I recently posted about a literal torture chamber run by the Muslim Brotherhood in Egypt.

That was only the tip of the iceberg: 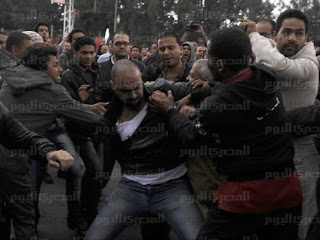 On 5 December, violent clashes raged for hours between supporters and opponents of President Mohamed Morsy, after the latter attacked a sit-in outside the presidential palace by protesters rejecting the constitutional declaration and a snap referendum on the constitution.

A total of 49 people were captured, beaten and kept overnight in makeshift holding cells as their captors interrogated them about their affiliations and the reason for their presence in the vicinity of the fighting.

But they were not arrested by police or military forces — according to numerous eyewitnesses and personal accounts, supported by video evidence, civilians affiliated with the ruling Muslim Brotherhood were the ones who kept them captive for hours under the eye of security forces.

Their protracted ordeal ended after members of the prosecution arrested the group, then ordered their release the next day in the absence of evidence of any wrongdoing on their part.

Some of those captured say they felt like prisoners of war. Others assumed they’d fallen into the hands of a private security apparatus.

Their testimonials leave one thing certain: that night, Islamist groups ran sovereign detention centers they’d created in the area around the presidential palace, imposing their authority on captured protesters as well as the security forces on hand.

A group of Morsy supporters ganged up on each of them, beating them severely then dragging each to the detention centers set up around the palace.

Omar was caught while delivering medical supplies to the field hospital set up at a gas station on the opposition side.

“They captured me, trashed the supplies and accused me of bringing medicine to the non-believers beating them up. They abducted me, I fell and they dragged me on the ground,” he recalls.

Omar says the mob beat him with anything their hands could reach, including a large billboard that landed on his head and cut him deeply.

When he tried to convince them to ease up, their response shocked him into silence. “I told them when the Prophet took over Mecca, he let non-believers go in peace. They told me ‘you are worse than the Prophet’s enemies in Mecca.’ I didn’t know what more to say.”

Drenched in blood, their hands and feet were tied up with a rough material that left visible marks, receiving minimal medical attention from Brotherhood-affiliated doctors, who were the only ones allowed in the area.
…
According to the three witnesses, police forces were not only unable to intervene and stop the attacks against protesters, but also took orders from the Brotherhood leaders on the scene.

A weak cordon of Central Security Forces was the only thing separating detainees from a larger, angrier pro-Morsy mob.

“I asked the police officer, ‘How can you let them beat us up while you’re standing there?’ He said, ‘I’m sorry, I’m following orders,” says Omar.

The three say the leader of the group was referred to as Dr. Alaa, and he frequently went inside the presidential palace and came back to continue assaulting them, a clear indication of coordination with the state.

Add torture and mob rule to the list of President Morsi’s accomplishments in office.

Morsi looks a lot like Mubarak, but without the ability to think past the 15th century.

We would love to hear from you! Please fill out this form and we will get in touch with you shortly.
Trending Z
News December 13, 2012
ZOA Condemns U.S. State Dept. & U.S. Amb. Nides For Siding with Antisemitic, Discriminatory Palestinian & Hamas Terrorists re: the Temple Mount, Violating Jews’ Religious Freedom
News December 13, 2012
ZOA’s Klein JPost Op-Ed: There is Nothing Extreme About Israel’s New Government
Uncategorized December 13, 2012
FLASH: ISRAEL-JORDAN PEACE TREATY (1994) GUARANTEES JEWS ACCESS TO THE TEMPLE MOUNT – LET MY PEOPLE PRAY
Uncategorized December 13, 2012
ZOA Analysis: Most American Rabbis Who Are Boycotting Some Israeli Ministers Are From Extremist Left Wing Groups (J Street; T’ruah; JVP)
Center for Law & Justice
We work to educate the American public and Congress about legal issues in order to advance the interests of Israel and the Jewish people.
We assist American victims of terrorism in vindicating their rights under the law, and seek to hold terrorists and sponsors of terrorism accountable for their actions.
We fight anti-Semitism and anti-Israel bias in the media and on college campuses.
We strive to enforce existing law and also to create new law in order to safeguard the rights of the Jewish people in the United States and Israel.
Our Mission
ZOA STATEMENT
The ZOA speaks out for Israel – in reports, newsletters, and other publications. In speeches in synagogues, churches, and community events, in high schools and colleges from coast to coast. In e-mail action alerts. In op-eds and letters to the editor. In radio and television appearances by ZOA leaders. Always on the front lines of pro-Israel activism, ZOA has made its mark.
Connect with us
Sign up for our Newsletter