From the Australian Jewish News:

THE editor-in-chief of The Age has defended a series of cartoons published over the last week, one of which the B’nai B’rith Anti-Defamation Commission (ADC) labelled as “virulent hate-speech”, that have outraged the Melbourne Jewish community.

The cartoon then states: “I did not speak out because if I did, doors would close to me, hateful mail would arrive, bitterness and spiteful condemnations would follow.”

“‘They’ of course referred to the Nazis. In Leunig’s cartoon, however, it is the Israelis who are the Nazis,” he said. “Leunig’s second anti-Semitic theme [is] that anyone who supports the Palestinians will immediately be besieged by the all-powerful Jewish lobby. This is the kind of hateful rhetoric you would expect on anti-Semitic websites, not The Age.”

A second Leunig cartoon on Saturday portrayed a character – presumably Jewish – at Mount Sinai receiving the commandment “Thou shalt not kill” before shooting both Moses and God dead, then standing on the mountain wearing God’s crown. Then a Bruce Petty cartoon on Monday, November 26, showed a boat of Palestinians with the banner “The Right of Return – UN” approaching a heavily fortified and armed Israel flying the banner “The Right to be Here – Bible”.

“This not only ignores the unquestionable fact that the UN created the modern Jewish State, but also overlooks thousands of years of Jewish history in the Land of Israel,” Abramovich said.

Defending the cartoons, Age editor-in-chief Andrew Holden said the cartoonists were all “very experienced, and well aware of the sensitivities around Middle East politics”.

“However, they are also entitled to express their personal opinions, even if these are challenging.”

I am not one to charge anti-semitism at the drop of a hat, but both of the Leunig cartoons clearly fit that definition. 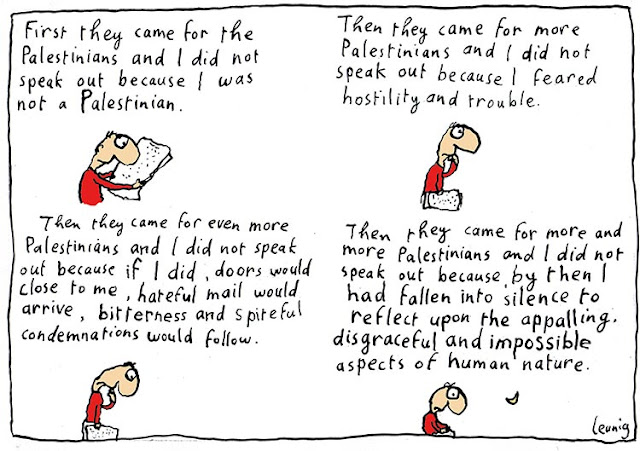 The anti-semitism here is from the obvious attempt at an analogy between today’s Israeli Jews and the Nazis. Besides the fact that such a comparison is sickeningly obscene, it is also one that anti-semites love specifically because it causes such pain to Jews. They love the supposed image of Jews acting, they claim, like their murderers.

Claiming that this could have applied to any ethnic group, as Leunig does in his response, is disingenuous. He obviously and deliberately chose to equate Jews to Nazis – not Chinese, not Syrians, not Americans. Imagine a similar cartoon about Copts in Egypt or Kurds in Turkey – it simply wouldn’t work. The entire impact of the cartoon, the delicious irony, would be diminished by using anyone besides Jews as the Nazi-equivalent.

There is of course one other anti-semtiic motif at play, which is that the all-powerful Jewish lobby shuts down freedom of speech. This is rich coming from Leunig, who as far as I can tell is not worried about losing his job. In fact, he has been obsessed with demonizing Israel for years with no apparent impact to his fame or fortune. This cartoon is not only pure anti-semitism, it is a puerile attempt to make the cartoonist feel brave.

The second one is even more explicitly anti-semitic: 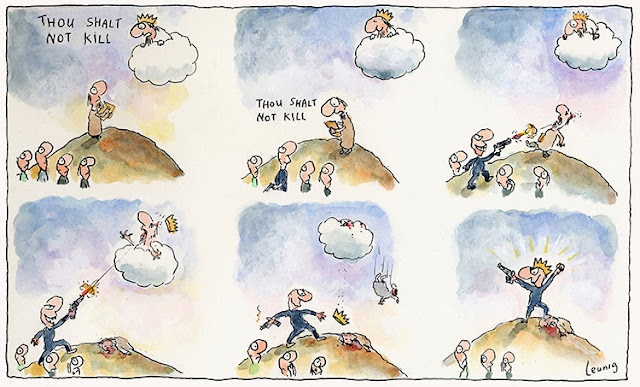 The Jews, recipients of the Ten Commandments, are not only murderers – but they are prophet-killers (as Muslims charge) and God-killers. (Dare I say “Christ-killers”?)

What can this cartoon represent except naked hate for, and incitement against, Jews? How else can it be interpreted?

Other cartoons of his, while horribly skewed, are not anti-semitic. A decade-old cartoon of his that was rejected by the same newspaper undoubtedly was.

Leunig’s pitiful defense of his cartoons is taken apart by Galus Australis.

We would love to hear from you! Please fill out this form and we will get in touch with you shortly.
Trending Z
News December 12, 2012
ZOA Condemns U.S. State Dept. & U.S. Amb. Nides For Siding with Antisemitic, Discriminatory Palestinian & Hamas Terrorists re: the Temple Mount, Violating Jews’ Religious Freedom
News December 12, 2012
ZOA’s Klein JPost Op-Ed: There is Nothing Extreme About Israel’s New Government
Uncategorized December 12, 2012
FLASH: ISRAEL-JORDAN PEACE TREATY (1994) GUARANTEES JEWS ACCESS TO THE TEMPLE MOUNT – LET MY PEOPLE PRAY
Uncategorized December 12, 2012
ZOA Analysis: Most American Rabbis Who Are Boycotting Some Israeli Ministers Are From Extremist Left Wing Groups (J Street; T’ruah; JVP)
Center for Law & Justice
We work to educate the American public and Congress about legal issues in order to advance the interests of Israel and the Jewish people.
We assist American victims of terrorism in vindicating their rights under the law, and seek to hold terrorists and sponsors of terrorism accountable for their actions.
We fight anti-Semitism and anti-Israel bias in the media and on college campuses.
We strive to enforce existing law and also to create new law in order to safeguard the rights of the Jewish people in the United States and Israel.
Our Mission
ZOA STATEMENT
The ZOA speaks out for Israel – in reports, newsletters, and other publications. In speeches in synagogues, churches, and community events, in high schools and colleges from coast to coast. In e-mail action alerts. In op-eds and letters to the editor. In radio and television appearances by ZOA leaders. Always on the front lines of pro-Israel activism, ZOA has made its mark.
Connect with us
Sign up for our Newsletter