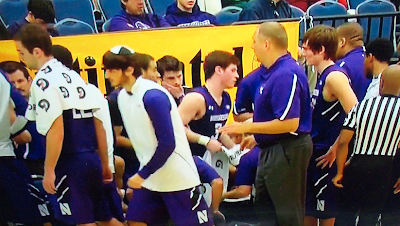 Hanukkah, the Jewish Festival of Lights, begins at sundown Saturday. But there’s already cause for celebration among Jewish basketball fans thanks to Aaron Liberman, a freshman walk-on at Northwestern who also happens to be an Orthodox Jew. He hasn’t yet appeared in a game this season because of a nasty case of shin splints, but he’s easy to spot on the bench: He’s the one wearing a yarmulke.

When Liberman is eventually given medical clearance to make his Northwestern debut, which he expects will be “pretty soon,” he plans to wear his yarmulke on the court. (Northwestern is making two versions for him — purple and white for home games, and purple and black for the road.) That will make him only the second yarmulke-clad player in Division I basketball history. The first such player was Tamir Goodman, the much-hyped “Jewish Jordan,” who played for Towson in 2000 and 2001. But disagreements with a new coach derailed Goodman’s college basketball career early in his sophomore year, leaving Division I hard courts yarmulke-free until Liberman’s arrival this season.

And get this: Liberman, who’s 6-foot-10 and was fifth in the nation in blocked shots for Valley Torah High School in Los Angeles in 2011, also plans to wear tzitzit — the specially knotted fringes or tassels worn by observant Jews — on the court. The tzitzit will be underneath his base-layer undershirt, and the fringes will be tucked into his shorts. Goodman didn’t wear tzitzit while at Towson, so Liberman almost certainly will be Division I’s first tzitzit-clad player. Mazel tov!

The article goes on to talk about how Division III basketball teams (like Yeshiva University) deals with yarmulkes, and has a hilarious aside about when the Mets pitching coach was seen on TV wearing a Mets yarmulke in 2010.

We would love to hear from you! Please fill out this form and we will get in touch with you shortly.
Trending Z
Uncategorized December 12, 2012
FLASH: ISRAEL-JORDAN PEACE TREATY (1994) GUARANTEES JEWS ACCESS TO THE TEMPLE MOUNT – LET MY PEOPLE PRAY
Uncategorized December 12, 2012
ZOA Analysis: Most American Rabbis Who Are Boycotting Some Israeli Ministers Are From Extremist Left Wing Groups (J Street; T’ruah; JVP)
Uncategorized December 12, 2012
Israel’s “Right of Return” Grandparent Clause is De-Judaizing the Jewish State – Eliminate It
Uncategorized December 12, 2012
Exclusive: ZOA Accuses Ilhan Omar of Hating the U.S. ‘as Much as Israel,’ Lauds Kevin McCarthy for ‘Throwing Her Off the HFAC’
Center for Law & Justice
We work to educate the American public and Congress about legal issues in order to advance the interests of Israel and the Jewish people.
We assist American victims of terrorism in vindicating their rights under the law, and seek to hold terrorists and sponsors of terrorism accountable for their actions.
We fight anti-Semitism and anti-Israel bias in the media and on college campuses.
We strive to enforce existing law and also to create new law in order to safeguard the rights of the Jewish people in the United States and Israel.
Our Mission
ZOA STATEMENT
The ZOA speaks out for Israel – in reports, newsletters, and other publications. In speeches in synagogues, churches, and community events, in high schools and colleges from coast to coast. In e-mail action alerts. In op-eds and letters to the editor. In radio and television appearances by ZOA leaders. Always on the front lines of pro-Israel activism, ZOA has made its mark.
Connect with us
Sign up for our Newsletter