“That Abbas would rather shun repeated offers from Israel, and instead embrace Hamas, indicates that yet again, when presented with a path for peace, the Palestinians chose rejection and terror
Some have even suggested Israel ought to directly negotiate with Hamas. But where does one begin negotiations with an enemy that does not even recognise your basic right to exist?
As Ron Prosor, Israel’s Ambassador to the UN, said in a recent interview with CNN’s Piers Morgan: “What would we negotiate with them: how big the coffin should be, how deep the hole or what flowers to send to my funeral?”

“In conclusion, Netanyahu will not be risking a thing by demanding a “total end to the conflict” and “two states for two peoples.” Abbas will reject the offer out of hand. At the same time, these preconditions are so morally compelling that even European politicians would not be able to brand them “unreasonable.” Abbas’s rejection will then restore to Israel the high moral grounds it has held since Nov. 29, 1947.”

“Europe has “slapped itself in the face” by ignoring Hamas’ threats as it ignored the Nazi death camps in the Holocaust, Foreign Minister Avigdor Lieberman charged on Tuesday, a day after Europe condemned Israel for construction plans for Jews in Jerusalem, Judea and Samaria.”

Israel’s so-called “red line” is different than the United States’. While Israel considers the “red line” to be the movement of chemical weapons to extremist groups, the Obama administration has said lately that its trigger for action would be any move by Syrian President Bashar Assad to use the weapons against the Syrian people.

“6. Are Jewish settlements in Judea and Samaria legal?
Judge Stephen Schwebel, former president of the International Court of Justice, determined that Israel’s presence in Judea and Samaria was rooted in self-defense and therefore did not constitute “occupation.” Eugene Rostow, former dean of Yale Law School, former undersecretary of state and co-author of U.N. Security Council Resolution 242, which sets out the criteria for Israel-Arab peacemaking said U.N. Resolution 242 does not call for withdrawal to the pre-1967 boundaries; Israel’s withdrawal from Sinai amounts to a 90 percent withdrawal from post-1967 areas; “

“The coverage almost exclusively advanced the narrative that plans to eventually build homes in E-1 would represent a death knell to the Two State Solution, would literally cut the West Bank in two, and would deny access to eastern Jerusalem to West Bank Palestinians.”

US intelligence foresees Palestinian state without resolution of conflict

“New U.S. intelligence report on what the world may look like in 2030 says a Palestinian state could come into being via “unofficial independent actions,” but that the core issues of the Israeli-Palestinian conflict would remain unresolved. Report says that Middle East faces a “highly unstable future” if Iranian regime develops nuclear weapons.”

Arab League Pledges Financial ‘Safety Net’ to Abbas
Representatives of the Arab League pledge to transfer a monthly sum of 100 million dollars as a “financial safety net” for PA.

On My Mind: Palestine’s Turkish agent

“Trying to be more Palestinian than the Palestinians, Turkey’s foreign minister went even further.
“No one can deny the suffering of the Palestinians since the First World War until today,” said Davutoglu, implying that the Balfour Declaration of 1917, 30 years before the UN partition plan, was the beginning of Palestinian suffering.
Turkey’s posturing on the Israeli-Palestinian conflict has become so ardent that The New York Times, in a recent editorial, mistakenly called Turkey an Arab country.”

Jihadists Aim to Rule across from Golan Heights

Jihadist victories in Syria may leave them side-by-side with Hizbullah, Hamas and Muslim Brotherhood as Israel’s neighboring regimes.
“The possibility of the Syrian side of the Golan Heights border with Israel being manned by jihadists in a post-Assad era has not been ignored by the United States.
The United States will declare the Al-Nusra Front, a jihadist group battling to overthrow Syria’s President Bashar Assad, a “foreign terrorist organization,” according to documents.”

Wounded IDF Soldier Recovers in Time for Hanukkah
Sergeant Shimon Alankri, who was seriously wounded last month in a terrorist attack on an IDF jeep, has recovered.

“On Monday, Alankri spoke to Channel 2 News, recalled the attack and talked about what he has gone through since. “The fact that I got out of this alive is proof that I won,” he said, recalling that his doctors had been concerned he would lose his eyesight. “I woke up two days after being on a respirator …. There is no doubt that I received a gift from G-d. It’s a miracle and I am now stating a new life.”

“Israeli scientists have developed a new technique to treat breast cancer and it is being used in trials already. The method employs a supercooled needle tip to repeatedly freeze then defrost tumors. This damages and ultimately kills the harmful tissue.”

Objet completes merger and $1.4b exit

Israeli 3D printer developer Objet and US rival Stratasys have now merged into a new Israeli company called Stratasys.
“Last weekend it looked like Retalix Ltd. (Nasdaq: RTLX; TASE: RTLX) acquisition by NCR at a company value of $800 million was going to be the largest Israeli exit of 2012. However, this morning that deal was surpassed. Israeli 3D printer manufacturer Objet Ltd. and its US rival Stratasys Inc. (Nasdaq: SSYS) announced that their merger has been completed creating a company with a value of $3 billion that will be incorporated in Israel.”

“Apple’s attempts to hire former Texas Instruments employees in Israel are being met with a healthy dose of competition. TNW has learned that processor giant Intel has begun an aggressive campaign to lure engineers away from Apple in that country.”

“Google is searching for promising Israeli high-tech companies. The international technology giant on Monday launched its “Campus Tel Aviv,” a 1,500-square-foot (140-square-meter) space that will hold regular events for local entrepreneurs and offer access to Google staff and other industry experts.”

From Al-Masara to the Wall Street Journal: A Case Report of Palestinian Fauxtography (h/t Phyllis)

A unique and mysterious remnant of Jewish life in Europe went on display in Jerusalem this week: a Hanukkah menorah made from the ornamental headgear of a soldier of the Austro-Hungarian Empire. (h/t Ishai) 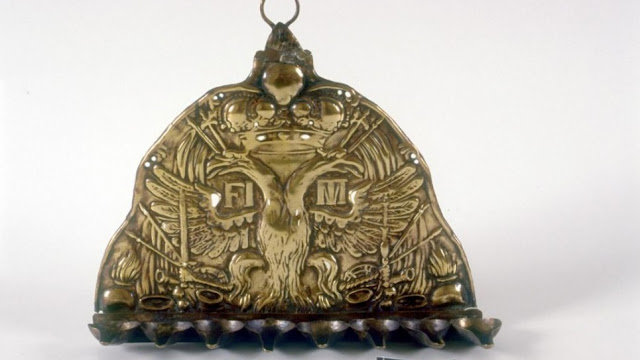 Palestine, Contiguity and the Absolute Truth at Volokh

Quantum levitation, from Tel Aviv U. (h/t AW, over a year old though)

We would love to hear from you! Please fill out this form and we will get in touch with you shortly.
Trending Z
News December 11, 2012
ZOA Condemns U.S. State Dept. & U.S. Amb. Nides For Siding with Antisemitic, Discriminatory Palestinian & Hamas Terrorists re: the Temple Mount, Violating Jews’ Religious Freedom
News December 11, 2012
ZOA’s Klein JPost Op-Ed: There is Nothing Extreme About Israel’s New Government
Uncategorized December 11, 2012
FLASH: ISRAEL-JORDAN PEACE TREATY (1994) GUARANTEES JEWS ACCESS TO THE TEMPLE MOUNT – LET MY PEOPLE PRAY
Uncategorized December 11, 2012
ZOA Analysis: Most American Rabbis Who Are Boycotting Some Israeli Ministers Are From Extremist Left Wing Groups (J Street; T’ruah; JVP)
Center for Law & Justice
We work to educate the American public and Congress about legal issues in order to advance the interests of Israel and the Jewish people.
We assist American victims of terrorism in vindicating their rights under the law, and seek to hold terrorists and sponsors of terrorism accountable for their actions.
We fight anti-Semitism and anti-Israel bias in the media and on college campuses.
We strive to enforce existing law and also to create new law in order to safeguard the rights of the Jewish people in the United States and Israel.
Our Mission
ZOA STATEMENT
The ZOA speaks out for Israel – in reports, newsletters, and other publications. In speeches in synagogues, churches, and community events, in high schools and colleges from coast to coast. In e-mail action alerts. In op-eds and letters to the editor. In radio and television appearances by ZOA leaders. Always on the front lines of pro-Israel activism, ZOA has made its mark.
Connect with us
Sign up for our Newsletter