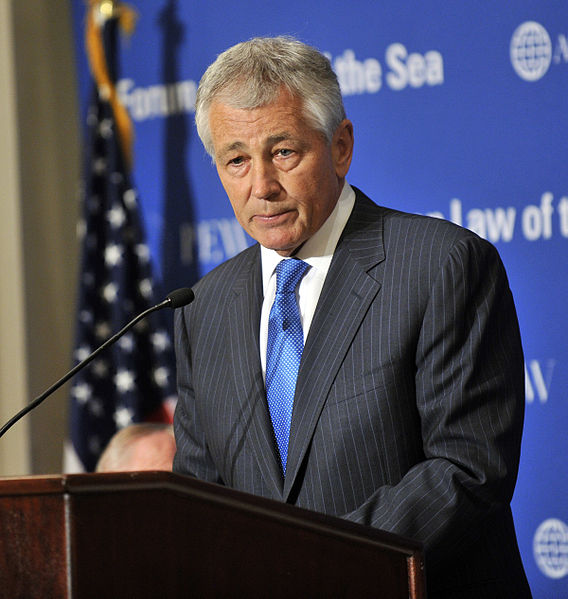 The Zionist Organization of America (ZOA) has pointed to further, alarming statements made by President Barack Obama’s nominee for Secretary of Defense, Chuck Hagel, and urged senators to vote against confirming him in that office.

The far-left J Street, which present itself as a pro-Israel group, has now released the video of Hagel’s speech to its 2009 conference, in which Hagel said that he opposed isolating Iran  through diplomacy and sanctions, saying, “How in the world do we think isolating someone is going to bring them around to your way of thinking?”

Hagel also subscribed to the discredited ‘linkage’ argument, which contends that the Middle East can be greatly tranquilized and U.S. relations with Arab states enhanced if the U.S. pressures Israel into a peace agreement with the Palestinians. Hagel said, “The Israeli-Palestinian conflict is central, not peripheral, to U.S. vital security interests in combating terrorism, preventing an Iranian nuclear weapon, stability in the Middle East and U.S. and global energy security.”

Echoing the views of hostile anti-Israel figures Brent Scowcroft and Zbigniew Brzezinski, Hagel suggested imposing a peace agreement on Israel, saying, “I think we are getting close to the time where something has to be laid down here on this.”

Hagel also called for a Fatah-Hamas merge, saying, “No peace will be possible nor sustainable as long as the Palestinians remain a house divided.” He did not mention any conditions for Hamas

Also, Hagel seemed to refer, like Israel’s Arab enemies, to Israel’s capital being Tel Aviv, not Jerusalem, when said, “It’s always difficult for leaders to step forward, either in Ramallah, Tel Aviv, Riyadh or Cairo.” (‘Sen. Chuck Hagel at the first J Street Conference,’ Youtube, January 29, 2012). Other than Tel Aviv, all the other cities named by Hagel are Arab capitals.

ZOA National President Morton A. Klein said, “These newly unearthed statements by Hagel simply reinforce the fact that Hagel has a virtually unrivaled record of hostility to Israel, bigotry towards Jews and gays, disbelief in the importance of a strong U.S. military, indulgence of Middle Eastern terrorist groups like Hizballah and Hamas, and antipathy towards any conceivable measure – economic or military – for preventing Iran becoming a nuclear power if negotiations fail.

“These statements afford further reasons for the Senate to vote against confirming Chuck Hagel as Defense Secretary and we urge senators to do so.”

We would love to hear from you! Please fill out this form and we will get in touch with you shortly.
Trending Z
Uncategorized January 31, 2013
ZOA Analysis: Most American Rabbis Who Are Boycotting Some Israeli Ministers Are From Extremist Left Wing Groups (J Street; T’ruah; JVP)
Uncategorized January 31, 2013
ZOA: Israel’s Reasonable Judicial Reform Proposals Are Good for Democracy, the Rule of Law and the Economy
Uncategorized January 31, 2013
Israel’s “Right of Return” Grandparent Clause is De-Judaizing the Jewish State – Eliminate It
News January 31, 2013
ZOA is Disappointed, Offended and Frightened by 211 U.S. House Votes Supporting Jew-Hating, Israel-Hating Rep. Ilhan Omar
Center for Law & Justice
We work to educate the American public and Congress about legal issues in order to advance the interests of Israel and the Jewish people.
We assist American victims of terrorism in vindicating their rights under the law, and seek to hold terrorists and sponsors of terrorism accountable for their actions.
We fight anti-Semitism and anti-Israel bias in the media and on college campuses.
We strive to enforce existing law and also to create new law in order to safeguard the rights of the Jewish people in the United States and Israel.
Our Mission
ZOA STATEMENT
The ZOA speaks out for Israel – in reports, newsletters, and other publications. In speeches in synagogues, churches, and community events, in high schools and colleges from coast to coast. In e-mail action alerts. In op-eds and letters to the editor. In radio and television appearances by ZOA leaders. Always on the front lines of pro-Israel activism, ZOA has made its mark.
Related Articles
OP-ED BY: Morton A. Klein Hagel Blames Israel for Palestinian Terrorism