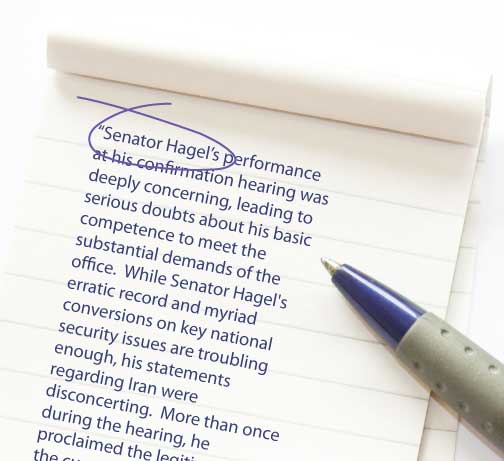 The Zionist Organization of America (ZOA) has applauded the 15 senators who wrote today to President Barack Obama, urging him to withdraw his nomination of former senator Chuck Hagel for the post of Defense Secretary, and has joined them in urging President Obama to do so.

“It would be unprecedented for a Secretary of Defense to take office without the broad base of bipartisan support and confidence needed to serve effectively in this critical position.  Over the last half-century, no Secretary of Defense has been confirmed and taken office with more than three Senators voting against him.  Further, in the history of this position, none has ever been confirmed with more than 11 opposing votes.  The occupant of this critical office should be someone whose candidacy is neither controversial nor divisive …

“Senator Hagel’s performance at his confirmation hearing was deeply concerning, leading to serious doubts about his basic competence to meet the substantial demands of the office.  While Senator Hagel’s erratic record and myriad conversions on key national security issues are troubling enough, his statements regarding Iran were disconcerting.  More than once during the hearing, he proclaimed the legitimacy of the current regime in Tehran, which has violently repressed its own citizens, rigged recent elections, provided material support for terrorism, and denied the Holocaust.

“Regarding U.S. policy on Iran’s pursuit of nuclear weapons, Senator Hagel displayed a seeming ambivalence about whether containment or prevention is the best approach, which gives us great concern.  Any sound strategy on Iran must be underpinned by the highly credible threat of U.S. military force, and there is broad bipartisan agreement on that point.  If Senator Hagel becomes Secretary of Defense, the military option will have near zero credibility.  This sends a dangerous message to the regime in Tehran, as it seeks to obtain the means necessary to harm both the United States and Israel.

“We have concluded that Senator Hagel is not the right candidate to hold the office of Secretary of Defense, and we respectfully request that you withdraw his nomination” (Letter to President Obama on Hagel Nomination, February 21, 2013).

We would love to hear from you! Please fill out this form and we will get in touch with you shortly.
Trending Z
News February 22, 2013
ZOA Condemns U.S. State Dept. & U.S. Amb. Nides For Siding with Antisemitic, Discriminatory Palestinian & Hamas Terrorists re: the Temple Mount, Violating Jews’ Religious Freedom
News February 22, 2013
ZOA’s Klein JPost Op-Ed: There is Nothing Extreme About Israel’s New Government
Uncategorized February 22, 2013
FLASH: ISRAEL-JORDAN PEACE TREATY (1994) GUARANTEES JEWS ACCESS TO THE TEMPLE MOUNT – LET MY PEOPLE PRAY
Uncategorized February 22, 2013
ZOA Analysis: Most American Rabbis Who Are Boycotting Some Israeli Ministers Are From Extremist Left Wing Groups (J Street; T’ruah; JVP)
Center for Law & Justice
We work to educate the American public and Congress about legal issues in order to advance the interests of Israel and the Jewish people.
We assist American victims of terrorism in vindicating their rights under the law, and seek to hold terrorists and sponsors of terrorism accountable for their actions.
We fight anti-Semitism and anti-Israel bias in the media and on college campuses.
We strive to enforce existing law and also to create new law in order to safeguard the rights of the Jewish people in the United States and Israel.
Our Mission
ZOA STATEMENT
The ZOA speaks out for Israel – in reports, newsletters, and other publications. In speeches in synagogues, churches, and community events, in high schools and colleges from coast to coast. In e-mail action alerts. In op-eds and letters to the editor. In radio and television appearances by ZOA leaders. Always on the front lines of pro-Israel activism, ZOA has made its mark.
Related Articles
OP-ED BY: Morton A. Klein Hagel Blames Israel for Palestinian Terrorism