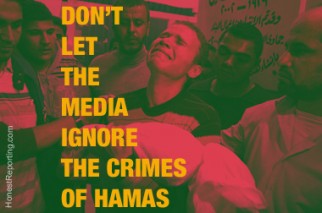 Referring to the impact of Israeli air strikes on Gaza during November 2012′s Operation Pillar of Defense the BBC’s Wyre Davis wrote:

In the BBC Gaza office, that feeling was most tangibly felt on the first day of this conflict when Omar, the 11-month-old son of our cameraman Jihad Misharawi, was killed when a missile hit his home. It was a pointless, terrible tragedy that deeply affected Jihad’s colleagues who live and work here in these testing conditions.

Indeed, the BBC in its coverage, claimed Omar almost as one of its own, making sure to mention him in dispatches as the victim of an Israeli attack without even considering any other possibility:

Many of the Palestinians killed in Gaza during the last two days by the Israeli aerial and naval bombardment were members of militant groups, but civilians – including at least four children – were also among the dead. They included 11-month-old Omar, the son of Jihad Misharawi, a BBC Arabic picture editor. Read more of Simon Plosker’s article at HonestReporting.com…

We would love to hear from you! Please fill out this form and we will get in touch with you shortly.
Trending Z
Uncategorized February 20, 2013
FLASH: ISRAEL-JORDAN PEACE TREATY (1994) GUARANTEES JEWS ACCESS TO THE TEMPLE MOUNT – LET MY PEOPLE PRAY
Uncategorized February 20, 2013
ZOA Analysis: Most American Rabbis Who Are Boycotting Some Israeli Ministers Are From Extremist Left Wing Groups (J Street; T’ruah; JVP)
Uncategorized February 20, 2013
Israel’s “Right of Return” Grandparent Clause is De-Judaizing the Jewish State – Eliminate It
Uncategorized February 20, 2013
Exclusive: ZOA Accuses Ilhan Omar of Hating the U.S. ‘as Much as Israel,’ Lauds Kevin McCarthy for ‘Throwing Her Off the HFAC’
Center for Law & Justice
We work to educate the American public and Congress about legal issues in order to advance the interests of Israel and the Jewish people.
We assist American victims of terrorism in vindicating their rights under the law, and seek to hold terrorists and sponsors of terrorism accountable for their actions.
We fight anti-Semitism and anti-Israel bias in the media and on college campuses.
We strive to enforce existing law and also to create new law in order to safeguard the rights of the Jewish people in the United States and Israel.
Our Mission
ZOA STATEMENT
The ZOA speaks out for Israel – in reports, newsletters, and other publications. In speeches in synagogues, churches, and community events, in high schools and colleges from coast to coast. In e-mail action alerts. In op-eds and letters to the editor. In radio and television appearances by ZOA leaders. Always on the front lines of pro-Israel activism, ZOA has made its mark.
Connect with us
Sign up for our Newsletter