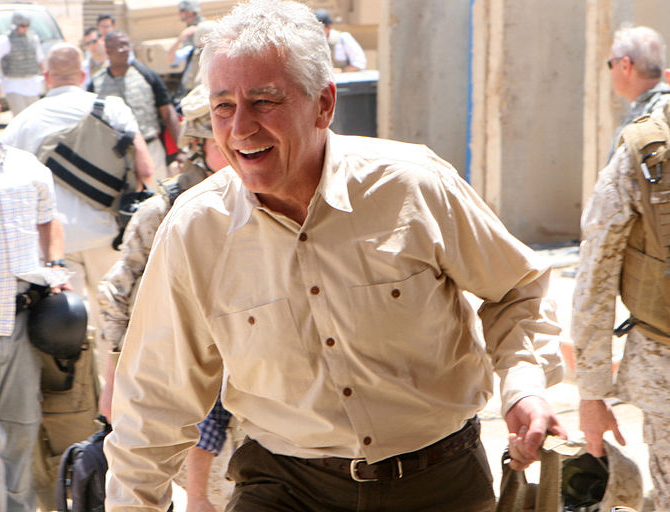 Shocked That AIPAC, ADL, AJC & Others Didn’t Oppose Him

This is a sad and worrying day for America, the West and Israel. This is a good day for Iran, Hamas, Hizballah and such. It is deeply troubling that the U.S. Senate has confirmed Chuck Hagel as Secretary of Defense. Hagel was confirmed by 58 votes to 41 votes.

There has never been a confirmed Defense Secretary who attracted more than eleven opposing votes. In contrast, Hagel’s predecessor, Leon Panetta, was confirmed by a unanimous 100–0 Senate vote.

The Zionist Organization of America (ZOA) today also lamented the failure of virtually all major pro-Israel Jewish organizations to oppose Chuck Hagel’s nomination. These include AIPAC, Anti-Defamation League (ADL), American Jewish Committee (AJC), Orthodox Union, B’nai B’rith, National Jewish Democratic Council and many others. Some expressed “concern.” AIPAC didn’t even express concern – AIPAC was silent. But none of these major Jewish defense groups explicitly opposed Hagel or lobbied Capitol Hill against him. (ADL’s Abe Foxman even said, “[Hagel] does not have to be as bad as some fear,” because he’ll simply take orders from Obama. Not only is this a dubious assumption, but Obama has now stated that he will be counting on ‘Hagel’s judgment and counsel’).

As Commentary magazine’s Jonathan Tobin has observed, “none of the major groups, aside from the Zionist Organization of America, spoke up publicly about his unsuitability for the post or his out-of-the mainstream views.”

The New York Sun has editorialized about the silence of Jewish groups other than the ZOA, noting, “only one of the Jewish defense agencies spoke out forcefully against [Hagel] That was the Zionist Organization of America … It opposed the Hagel nomination early, forthrightly, and unapologetically. The result, according to the ZOA’s president, Morton Klein, is that it received objections from several [Jewish] leaders …  Said Mr. Klein: “Several senators — and important ones — said to me: ‘If Aipac, ADL and AJCommittee — especially Aipac — had come out and lobbied against Hagel, he would have been stopped.’” We believe these Jewish groups abdicated their responsibility and duty to their mission.

Chuck Hagel was the most incompetent and dangerous nominee for Defense Secretary in recent history – dangerous for America, the West and Israel. How can we entrust a man who agrees with the idea that the U.S. is the “world’s bully” to defend the U.S. and its security interests as well as the security of important allies?

How can a man who called Israel’s defending itself against Lebanon after being pounded by thousands of Hizballah rockets a ‘sickening slaughter’ be entrusted with the cabinet position charged with militarily assisting U.S. allies?

In his confirmation hearings, Hagel displayed a lack of knowledge and grasp of the issues. He also dramatically reversed himself on an array of previously held views. Unless he underwent a truly extraordinary transformation, rejecting a range of views he has held for the last 15 years, should we believe the contrary statements that Hagel uttered in a single afternoon of hearings, or should we believe Hagel’s statements and votes over 15 years?

What was especially troubling about the Jewish community’s response is that this was a black and white issue. There was no gray. Virtually everyone who cared about stopping Iran’s nuclear ambitions, stopping radical Islamist terrorists, and supporting Israel’s defense knew that Chuck Hagel was as problematic and dangerous a choice as one could have imagined.

It is not a trivial matter when a U.S. Defense Secretary is hostile to any important U.S. ally. But it is incomparably more serious when that ally is Israel, because Israel is not a relatively unthreatened ally, like Britain or Canada or Australia – it is surrounded by hostile regimes, most of whom do not even recognize it and several of whom have repeatedly made war on it. Iran has not threatened Spain with destruction, but it has repeatedly threatened Israel with destruction. Hagel’s confirmation communicates the terrible message that the U.S. is not serious about stopping Iran becoming a nuclear power.

The ZOA praises those organizations, including Christians United for Israel, the Emergency Committee for Israel, JINSA, the National Council of Young Israel, Republican Jewish Coalition, the Washington Post, the Wall Street Journal and NORPAC, the largest pro-Israel PAC, which spoke out loudly and clearly with moral clarity in opposition to this nomination.

Had the major American Jewish organizations that abstained from the fight put themselves on record, especially early on when the Hagel nomination had been rumored but not yet formally announced, we believe that many Democratic senators who were privately troubled by Hagel’s record would have felt fortified and given cover by the depth of American Jewish concern and opposition to come out against him. Several U.S. senators expressed this to me.

A detailed record of Hagel’s statements, votes and views follow:

Were all of these troubling actions not enough to oppose the Hagel nomination?

To quote Commentary’s Jonathan Tobin, writing before the Hagel vote, ‘Should [Jewish organizations] fail to find their voices now about Hagel, many of the good people inside these organizations may have reason to look back with regret on their decisions. Hagel’s appointment raises genuine doubts about this administration’s commitment to stopping Iran’s nuclear threat and continued support of Israel at a time when its enemies (such as the Muslim Brotherhood government in Egypt) are gaining strength. Silence at such a moment is impossible for men and women of conscience.’

We would love to hear from you! Please fill out this form and we will get in touch with you shortly.
Trending Z
Uncategorized March 4, 2013
ZOA Analysis: Most American Rabbis Who Are Boycotting Some Israeli Ministers Are From Extremist Left Wing Groups (J Street; T’ruah; JVP)
Uncategorized March 4, 2013
ZOA: Israel’s Reasonable Judicial Reform Proposals Are Good for Democracy, the Rule of Law and the Economy
News March 4, 2013
ZOA is Disappointed, Offended and Frightened by 211 U.S. House Votes Supporting Jew-Hating, Israel-Hating Rep. Ilhan Omar
Uncategorized March 4, 2013
Israel’s “Right of Return” Grandparent Clause is De-Judaizing the Jewish State – Eliminate It
Center for Law & Justice
We work to educate the American public and Congress about legal issues in order to advance the interests of Israel and the Jewish people.
We assist American victims of terrorism in vindicating their rights under the law, and seek to hold terrorists and sponsors of terrorism accountable for their actions.
We fight anti-Semitism and anti-Israel bias in the media and on college campuses.
We strive to enforce existing law and also to create new law in order to safeguard the rights of the Jewish people in the United States and Israel.
Our Mission
ZOA STATEMENT
The ZOA speaks out for Israel – in reports, newsletters, and other publications. In speeches in synagogues, churches, and community events, in high schools and colleges from coast to coast. In e-mail action alerts. In op-eds and letters to the editor. In radio and television appearances by ZOA leaders. Always on the front lines of pro-Israel activism, ZOA has made its mark.
Related Articles
OP-ED ZOA Mourns Passing of Ariel Founder & Visionary, Ron Nachman