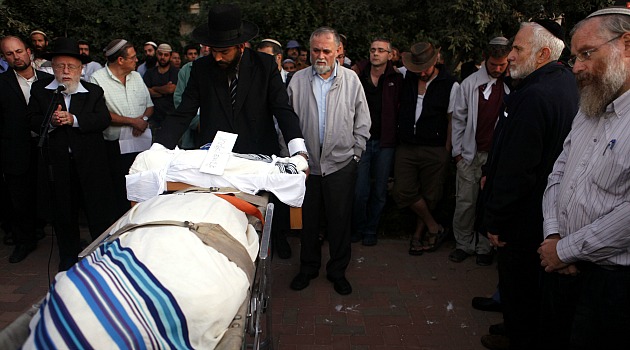 Where’s the Justice for American Settler Killed by Palestinian Stone-Throwers?
Op-Ed ZOA in the news

Two FBI special agents sat across from me in a conference room at the J. Edgar Hoover Building, in Washington. It was late October last year, shortly after Sukkot. We were discussing the deaths of my son Asher Palmer, and my grandson Yonatan Palmer, who were murdered on a Friday afternoon, September 23, 2011.

That day, Asher had strapped Yonatan into his car seat and headed to his in-laws in Jerusalem, where he expected to spend the Sabbath with his wife. Soon after they left, Asher drove onto a two-lane highway just outside the West Bank settlement of Kiryat Arba; a taxicab sped toward him, its rear window rolled down. The cab swerved close to Asher’s lane, and a football-size rock was thrown from the back seat, crashing through his windshield. Asher’s car veered off the road and rolled over. The cab sped off.

We can’t know Asher’s reactions at that moment. The police found no skid marks on the road, and theorized that the stone had knocked Asher unconscious, leaving him unable to brake or to control his car. Asher was just shy of his 25th birthday. Yonatan was nearly 1 year old. Both were declared dead by the first responders.

Wa’al al-Arjeh drove the cab. Ali Saadeh threw the rock. Al-Arjeh later said that he had worked for the security and intelligence forces of the Palestinian Authority for nearly 10 years. Saadeh was responsible for a number of other attacks against Jews.

On October 4, 2011, Israeli security forces arrested Saadeh, al-Arjeh and three of their accomplices, who confessed to the attack. A fourth member of al-Arjeh’s gang was arrested several days later. A series of trials followed, with al-Arjeh convicted of murder in early April, and Saadeh now awaiting his own verdict.

Asher was an American citizen. The United States Department of Justice therefore was supposed to have responded immediately to the murders with its own set of prescribed actions: assigning an FBI rapid deployment team to the region, opening an FBI investigation and establishing a joint task force with the Department of State.

Not one action, I learned, had been taken for Asher. Not even a preliminary inquiry. So 13 months had passed since the murders (now 18 months), and I was sitting in an FBI office, trying to understand why. The FBI agents explained: They preferred to open “value added” investigations.

Mine, however, was not an isolated complaint. To date, the United States has not prosecuted a single Palestinian for attacking an American in Israel or in a P.A.-controlled location, but in the past two decades alone, as many as 143 Americans have been killed or badly injured. Were all of these cases also deemed unworthy?

Michael Palmer is the father/grandfather of Asher and Yonatan Palmer. Jeff Daube, the Israel director of the Zionist Organization of America, contributed to this opinion piece.

We would love to hear from you! Please fill out this form and we will get in touch with you shortly.
Trending Z
Uncategorized April 9, 2013
FLASH: ISRAEL-JORDAN PEACE TREATY (1994) GUARANTEES JEWS ACCESS TO THE TEMPLE MOUNT – LET MY PEOPLE PRAY
Uncategorized April 9, 2013
ZOA Analysis: Most American Rabbis Who Are Boycotting Some Israeli Ministers Are From Extremist Left Wing Groups (J Street; T’ruah; JVP)
Uncategorized April 9, 2013
Israel’s “Right of Return” Grandparent Clause is De-Judaizing the Jewish State – Eliminate It
Uncategorized April 9, 2013
Exclusive: ZOA Accuses Ilhan Omar of Hating the U.S. ‘as Much as Israel,’ Lauds Kevin McCarthy for ‘Throwing Her Off the HFAC’
Center for Law & Justice
We work to educate the American public and Congress about legal issues in order to advance the interests of Israel and the Jewish people.
We assist American victims of terrorism in vindicating their rights under the law, and seek to hold terrorists and sponsors of terrorism accountable for their actions.
We fight anti-Semitism and anti-Israel bias in the media and on college campuses.
We strive to enforce existing law and also to create new law in order to safeguard the rights of the Jewish people in the United States and Israel.
Our Mission
ZOA STATEMENT
The ZOA speaks out for Israel – in reports, newsletters, and other publications. In speeches in synagogues, churches, and community events, in high schools and colleges from coast to coast. In e-mail action alerts. In op-eds and letters to the editor. In radio and television appearances by ZOA leaders. Always on the front lines of pro-Israel activism, ZOA has made its mark.
Connect with us
Sign up for our Newsletter