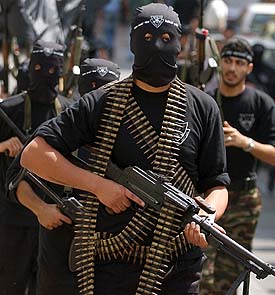 The Zionist Organization of America (ZOA) has pointed to a new poll showing that a dramatically large majority of Jewish Israelis (85%) oppose freeing jailed Palestinian terrorists as a precondition for the resumption of Israeli /Palestinian negotiations. The Smith Research poll found that, in answer to the question of whether they would support releasing terrorists as a gesture to bring the Palestinians to the negotiating table, 57% said they would strongly oppose it, 28% said were against it, whereas only 13% said they supported it and just 2% said they were strongly in favor of such a move. The survey also found that 68% of Israelis believe that Israeli withdrawal from Judea and Samaria would harm Israeli security, whereas only 21% believe it would improve it. (Gil Hoffman, ‘Poll: 85% oppose releasing prisoners for peace,’ Jerusalem Post, June 11, 0213).

ZOA National President Morton A. Klein said, “There is no moral or practical justification for freeing convicted, Jew-killing terrorists. Quite the contrary: as we have noted in detail on more than one occasion, the record shows that releasing jailed terrorists – quite apart from being a travesty of justice, since murderers should serve their full term – encourages more kidnapping of Israelis and leads to more bloodshed when many of those released return to murdering and maiming innocent Jewish men, women and children.

“The only obstacle to genuine Israeli/Palestinian talks, in addition to Mahmoud Abbas’ refusal over almost all of the past four and half years to negotiate with Israel, is the PA’s failure to fulfill its commitments under the Oslo agreements to arrest terrorists…”

“The only obstacle to genuine Israeli/Palestinian talks, in addition to Mahmoud Abbas’ refusal over almost all of the past four and half years to negotiate with Israel, is the PA’s failure to fulfill its commitments under the Oslo agreements to arrest terrorists, dismantle terrorist groups and end the incitement to hatred and murder in the PA-controlled media, mosques, schools and youth camps.

“If Abbas were truly interested in peace, he would both support Israeli counter-terrorist measures and desire to see terrorists kept behind bars. He would not be agitating for their release, let alone making negotiations dependent on such releases, as he has done.

“The Israeli government should not release a single terrorist from jail and should not even consider doing so in order to advance a bogus peace process with an unreconstructed terror-supporting regime like Abbas’ PA.

“The paramount duty of the Israeli government is to protect its citizens. It follows that the most important consideration must be preventing the loss of further innocent lives to terror, not resuming talks with a terrorist-sponsoring PA that neither accepts Israel as a Jewish state nor works to end the glorification of Jew-murdering terrorists in Palestinian society. Fortunately, the Israeli public understands this and it is our hope the Israeli government will reflect this understanding.”

We would love to hear from you! Please fill out this form and we will get in touch with you shortly.
Trending Z
Uncategorized June 26, 2013
FLASH: ISRAEL-JORDAN PEACE TREATY (1994) GUARANTEES JEWS ACCESS TO THE TEMPLE MOUNT – LET MY PEOPLE PRAY
Uncategorized June 26, 2013
ZOA Analysis: Most American Rabbis Who Are Boycotting Some Israeli Ministers Are From Extremist Left Wing Groups (J Street; T’ruah; JVP)
Uncategorized June 26, 2013
Israel’s “Right of Return” Grandparent Clause is De-Judaizing the Jewish State – Eliminate It
Uncategorized June 26, 2013
Exclusive: ZOA Accuses Ilhan Omar of Hating the U.S. ‘as Much as Israel,’ Lauds Kevin McCarthy for ‘Throwing Her Off the HFAC’
Center for Law & Justice
We work to educate the American public and Congress about legal issues in order to advance the interests of Israel and the Jewish people.
We assist American victims of terrorism in vindicating their rights under the law, and seek to hold terrorists and sponsors of terrorism accountable for their actions.
We fight anti-Semitism and anti-Israel bias in the media and on college campuses.
We strive to enforce existing law and also to create new law in order to safeguard the rights of the Jewish people in the United States and Israel.
Our Mission
ZOA STATEMENT
The ZOA speaks out for Israel – in reports, newsletters, and other publications. In speeches in synagogues, churches, and community events, in high schools and colleges from coast to coast. In e-mail action alerts. In op-eds and letters to the editor. In radio and television appearances by ZOA leaders. Always on the front lines of pro-Israel activism, ZOA has made its mark.
Related Articles
OP-ED BY: Morton A. Klein Hagel Blames Israel for Palestinian Terrorism