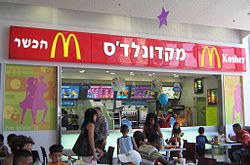 The Zionist Organization of America (ZOA) has criticized the restaurant chain McDonalds for refusal to open a branch in the city of Ariel, because it is located in Samaria, beyond the 1949 armistice lines. Tzahi Nahmias, the realtor who is marketing the Ariel mall’s commercial space, told the paper that McDonald’s refused to open a branch because Ariel is located beyond the Green Line.

Rami Levy, an Israeli supermarket magnate and one of the entrepreneurs behind the construction of the Ariel mall, said that businesses that refuse to open in the West Bank also harm the Arab population there: “I do not accept that companies make business decisions that are informed by political considerations. The mall in Ariel is expected to employ Arab and Jewish workers from the area and to provide services for these populations. This boycott is superfluous, and it harms the Arab population that it is supposedly trying to protect” (‘Report: McDonald’s refuses to open branch in Ariel,’ Jerusalem Post, June 26, 2013).

“We strongly criticize this decision by MacDonald’s. Such a boycott of Jewish neighborhoods in Judea and Samaria is purely discriminatory.”

ZOA National President Morton A. Klein said, “We strongly criticize this decision by MacDonald’s. Such a boycott of Jewish neighborhoods in Judea and Samaria is purely discriminatory. It is also completely wrong-headed, because the idea that Jews living in Judea and Samaria prevent an Arab/Israeli peace is pure fiction.

“Peace is presently precluded by the refusal of the Palestinian leadership and society to accept Israel as a Jewish state and make peace with it; their continuing glorification of terrorists and terrorism; and the refusal of Mahmoud Abbas’ Palestinian Authority (PA) to implement its Oslo commitments to arrest terrorists, collect illegal weaponry, outlaw terrorist groups and end the incitement to hatred and murder that permeates the PA-controlled media, mosques, schools and youth camps – not by Jews living or building homes in Judea and Samaria.”

We would love to hear from you! Please fill out this form and we will get in touch with you shortly.
Trending Z
News June 28, 2013
ZOA Condemns U.S. State Dept. & U.S. Amb. Nides For Siding with Antisemitic, Discriminatory Palestinian & Hamas Terrorists re: the Temple Mount, Violating Jews’ Religious Freedom
News June 28, 2013
ZOA’s Klein JPost Op-Ed: There is Nothing Extreme About Israel’s New Government
Uncategorized June 28, 2013
FLASH: ISRAEL-JORDAN PEACE TREATY (1994) GUARANTEES JEWS ACCESS TO THE TEMPLE MOUNT – LET MY PEOPLE PRAY
Uncategorized June 28, 2013
ZOA Analysis: Most American Rabbis Who Are Boycotting Some Israeli Ministers Are From Extremist Left Wing Groups (J Street; T’ruah; JVP)
Center for Law & Justice
We work to educate the American public and Congress about legal issues in order to advance the interests of Israel and the Jewish people.
We assist American victims of terrorism in vindicating their rights under the law, and seek to hold terrorists and sponsors of terrorism accountable for their actions.
We fight anti-Semitism and anti-Israel bias in the media and on college campuses.
We strive to enforce existing law and also to create new law in order to safeguard the rights of the Jewish people in the United States and Israel.
Our Mission
ZOA STATEMENT
The ZOA speaks out for Israel – in reports, newsletters, and other publications. In speeches in synagogues, churches, and community events, in high schools and colleges from coast to coast. In e-mail action alerts. In op-eds and letters to the editor. In radio and television appearances by ZOA leaders. Always on the front lines of pro-Israel activism, ZOA has made its mark.
Related Articles
OP-ED BY: Morton A. Klein Hagel Blames Israel for Palestinian Terrorism