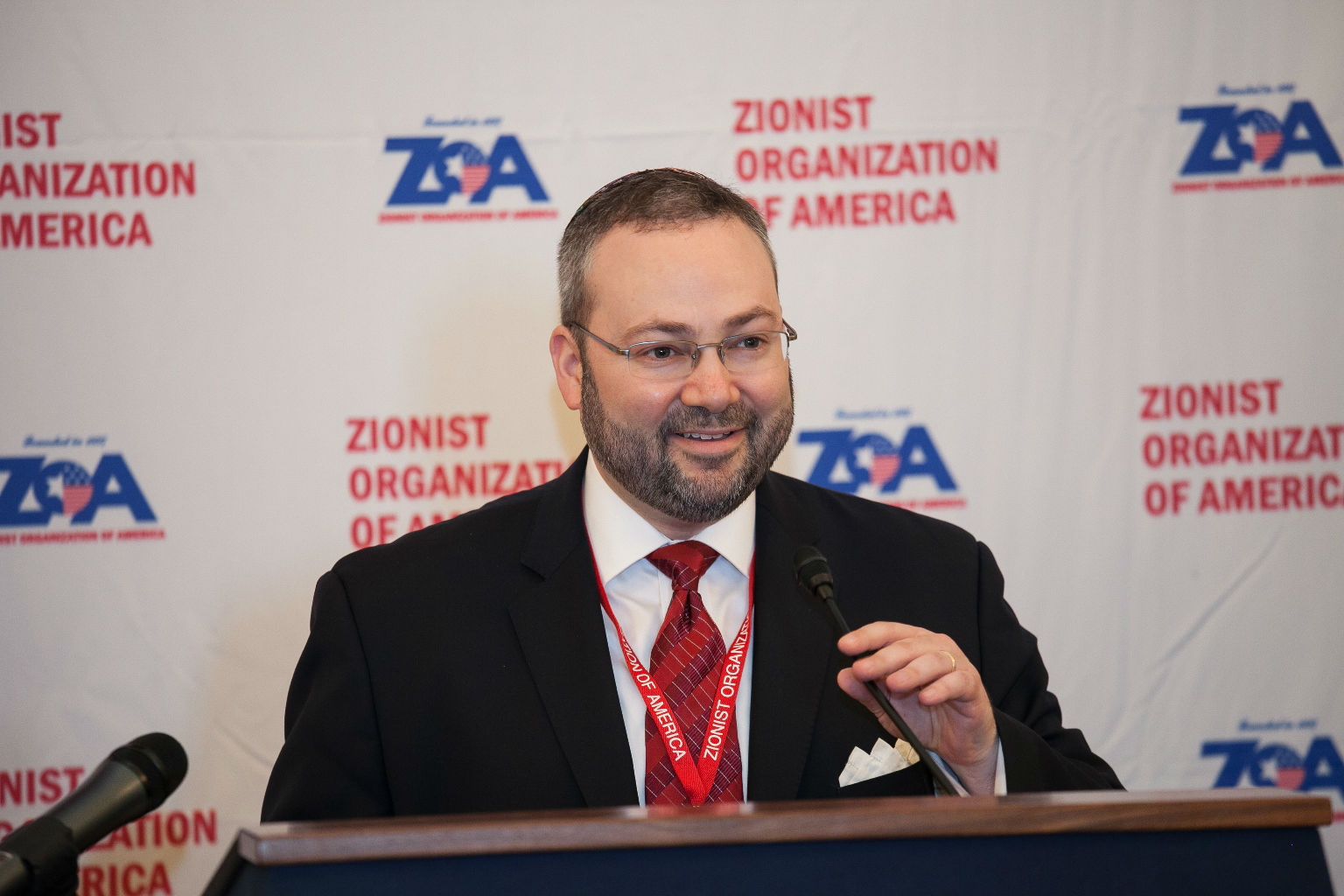 On June 27, ZOA was a key participant in a roundtable discussion hosted by the House Republican Conference featuring Dani Dayan, Chief Foreign Envoy and former Chairman of the YESHA Council, the umbrella organization representing the Jewish population in Judea and Samaria. Participants included Chairman of the Foreign Affairs Committee Ed Royce (R-CA), former Chair of the Foreign Affairs Committee Chair and the current Chair of the Subcommittee on the Middle East and North Africa Ileana Ros-Lehtinen (R-FL), Chief Deputy Whip Peter Roskam (R-IL), Congressman Trent Franks (R-AZ), Congressman Tom Cotton (R-AR), ZOA’s National President Morton Klein, and representatives from other American Jewish organizations. ZOA’s central role in this meeting was illustrated by the Conference’s request for Mr. Klein to speak immediately following the comments of the Congressmen, before any other Jewish group.

The discussion focused on the historic and strategic significance of Judea and Samaria, and on the current obstacles to peace by the Palestinian Arabs, including Holocaust denial, hero worship of Jew-killing terrorists, and incitement to violence and hatred against Jews and Israel at the highest levels of the Palestinian Authority (PA) and permeating their entire culture. The discussion also highlighted some of the positive, constructive ways in which the Jewish communities in Judea and Samaria promote coexistence with the Palestinian Arabs in Judea and Samaria, including the tremendous economic and jobs boost that Jewish settlements have brought to the area since 1967.  The discussion also covered Iran’s nuclear program, and the evolving situation in Syria and elsewhere in the Middle East.

In his remarks, Dani Dayan observed that the conventional wisdom about the Jewish communities in YESHA have not correctly recorded his own experiences.   He said that living in close proximity has resulted in numerous positive interactions both personal and economic aspects of relations with the Arabs of Judea and Samaria.  It is unfortunate that the policy of the US State Department actively prevents US funding for any Jewish activity in Judea and Samaria including those that are mutually beneficial to the local Arab communities, such as denying research grants to Ariel University for an environmental improvement project to help a local Arab town improve its charcoal production and clean up their resultant pollution.

To illustrate the two reasons to pursue a Jewish presence in the hills of the historic Jewish heartland, Dayan spoke of two windows in his home.   Out of one window he sees the coastal plain of Israel, spread out towards the Mediterranean, which points to the tremendous strategic importance of Jewish communities.   Out of the second window he sees the hills where all of Jewish History and the stories of our people played out.  He said that this historical and spiritual motivation for living in Judea and Samaria is actually the stronger motivation.

Dayan also made abundantly clear that US Secretary of State John Kerry’s mission to push the “peace process” is destined to fail and that this diplomatic failure will ultimately further weaken America’s prestige and credibility in the region.

Dayan also made abundantly clear that US Secretary of State John Kerry’s mission to push the “peace process” is destined to fail and that this diplomatic failure will ultimately further weaken America’s prestige and credibility in the region. He emphasized to the Congressmen that this outcome will do far more damage to American national security interests globally than to Israel’s international standing. He further made clear that if a Palestinian Arab state should somehow actually come into being now it would pose a horrible danger to Israel. Such a state would immediately be taken over by Hamas and so would also be a destabilizing force in the region, further strengthening Islamic fundamentalism and terror.

The members of congress Congressmen’s remarks were supportive of Israel and the presence of Jews in YESHA.  Representing the chairwoman of the House Republican Conference, Rep. Cathy McMorris Rodgers (R-WA), who was attending a family funeral, was Chief Deputy Whip Peter Roskam (R-IL).  After remarks by Dayan, Foreign Affairs Committee Chair Ed Royce (R-CA) launched a forceful critique of the PA’s incitement against Jews and Israel, pointing out that this is being spread in their schools, mosques, media, speeches and children’s camps. He made it very clear that this incitement makes the possibility of peace very difficult. Rep. Royce also spoke about his own father, a PFC in a U.S. Army unit that liberated the Dachau concentration camp in 1945 and took photos for the public record of what they found.  When the Congressman visited Ramallah as part of a Congressional Delegation two years ago, he confronted PA President Mahmoud Abbas about his own record of denying the Holocaust.  Rep. Royce even noted that Abbas has a PhD equivalent from the Patrice Lumumba University in Moscow, where his dissertation focused on Holocaust revisionism. Rep. Royce was able to share his father’s personal testimony to challenge Abbas’s hateful narrative, and the leader of the PA sheepishly agreed to move on to discuss the future instead of the past. Rep. Royce strongly reiterated the problems and dangers of PA incitement against Jews and Israel and how the PA must be held accountable.

Also speaking were Middle East Subcommittee Chair Ileana Ros-Lehtinen (R-FL), who indicated hearings on the Palestinian Arab incitement issue would be forthcoming, Congressman Trent Franks (R-AZ), who spoke of his ongoing commitment to support Israel’s ability to defend herself and indicated some of the benefits the US has received from Israel, such as F-16 avionics upgrades. He also stated that technology transfer between the two allies often benefit the US military far more than is commonly understood. Congressman Tom Cotton (R-AK) then emphasized the need for effective sanctions against Iran to persuade the regime to abandon its nuclear program. Congressman Roskam then asked for remarks from ZOA’s National President Morton Klein before opening the discussion to other participants.

Mr. Klein was undoubtedly the most dynamic speaker at this meeting.  In his brief remarks he effectively covered almost every ZOA talking point, beginning with the Fatah Poster they commissioned for the 48th anniversary of the founding of the terrorist group.  The poster shows all of Israel covered in a Kaffieh, and also contains symbols including a Kalashnikov Assault Rifle and keys symbolizing the supposed right to ‘return’ to homes in Israeli cities.  Mort used this poster, as well as the similar one celebrating Fatah’s 45th anniversary, as launching points to discuss PA incitement and the true issue in the Arab war against Israel and Jews:  their inability to accept a Jewish state with any borders.  Until this situation changes, he pointed out, any solution to the conflict will fail, no matter what concessions Israel makes. Mort also pointed out that as the child of survivors, Holocaust denial by Abbas is particularly repugnant.

Congressional reaction to Mr. Klein’s remarks was enthusiastic. Rep. Ros-Lehtinen said she would use the Fatah posters provided by ZOA in upcoming hearings on Palestinian Arab incitement and the “peace process.”  Rep. Franks asked Mort for permission to use his remarks in a speech on the floor of the House that he was currently writing. The Congressmen, particularly Rep. Cotton, also expressed agreement with ZOA positions on stopping Iran’s nuclear program. 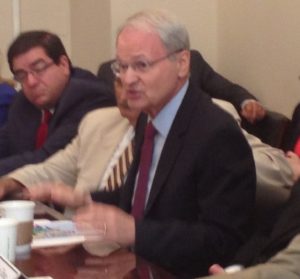 We would love to hear from you! Please fill out this form and we will get in touch with you shortly.
Trending Z
News July 8, 2013
ZOA Condemns U.S. State Dept. & U.S. Amb. Nides For Siding with Antisemitic, Discriminatory Palestinian & Hamas Terrorists re: the Temple Mount, Violating Jews’ Religious Freedom
News July 8, 2013
ZOA’s Klein JPost Op-Ed: There is Nothing Extreme About Israel’s New Government
Uncategorized July 8, 2013
FLASH: ISRAEL-JORDAN PEACE TREATY (1994) GUARANTEES JEWS ACCESS TO THE TEMPLE MOUNT – LET MY PEOPLE PRAY
Uncategorized July 8, 2013
ZOA Analysis: Most American Rabbis Who Are Boycotting Some Israeli Ministers Are From Extremist Left Wing Groups (J Street; T’ruah; JVP)
Center for Law & Justice
We work to educate the American public and Congress about legal issues in order to advance the interests of Israel and the Jewish people.
We assist American victims of terrorism in vindicating their rights under the law, and seek to hold terrorists and sponsors of terrorism accountable for their actions.
We fight anti-Semitism and anti-Israel bias in the media and on college campuses.
We strive to enforce existing law and also to create new law in order to safeguard the rights of the Jewish people in the United States and Israel.
Our Mission
ZOA STATEMENT
The ZOA speaks out for Israel – in reports, newsletters, and other publications. In speeches in synagogues, churches, and community events, in high schools and colleges from coast to coast. In e-mail action alerts. In op-eds and letters to the editor. In radio and television appearances by ZOA leaders. Always on the front lines of pro-Israel activism, ZOA has made its mark.
Connect with us
Sign up for our Newsletter