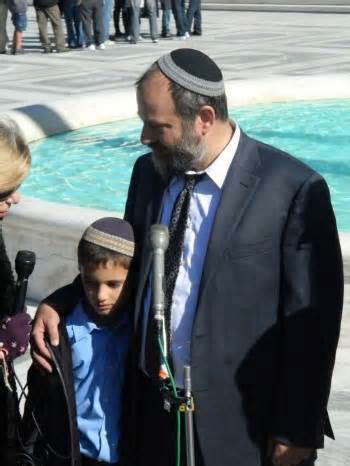 The Zionist Organization of America (ZOA) is deeply disappointed by the decision of the U.S. Court of Appeals for the District of Columbia, issued on July 23, 2013, refusing to uphold the right of American citizens born in Jerusalem to have Israel listed as their birthplace on their passports and other official documents.  Congress conferred this right in 2002 when it passed legislation signed into law by President George W. Bush.  Before the law, such passports and other documents listed Jerusalem only, with no country of birth.  Ari and Naomi Zivotofsky, who sued the State Department when their Jerusalem-born son Menachem was denied a passport with Israel as his birthplace, will be seeking Supreme Court review of the Court of Appeals’ decision. The ZOA has submitted two amicus briefs in the Zivotofskys’ legal proceedings, and will continue to support their efforts.

The Court of Appeals decided that the Jerusalem passport law is unconstitutional because it “impermissibly intrudes” on the President’s power to recognize foreign sovereigns, including which sovereign controls Jerusalem.  Acknowledging that the U.S. Supreme Court has never actually ruled that the President exclusively holds this power, the Court of Appeals nevertheless decided that it is a power exclusive to the President, based on its reading of Supreme Court decisions and the text and historical construction of the Constitution.

The Zivotoskys filed their lawsuit in 2003, soon after the Jerusalem passport law was enacted.  Represented by Nathan Lewin, Esq. (a member of the ZOA’s Center for Law and Justice’s advisory board) and Alyza Lewin, Esq., the Zivotofskys sought to compel the State Department to enforce the law and issue a passport listing Israel as their son’s birthplace. The ZOA filed a similar complaint on behalf of another American born in Jerusalem, whose case was consolidated with the Zivotofskys’.

The Zivotofsky case went up to the U.S. Supreme Court and then back to the Court of Appeals. In its amicus brief to the Court of Appeals, the ZOA provided example after example of the many departments and agencies in the Executive Branch – including the State Department – that have routinely referred to Jerusalem as part of the State of Israel, without any evident impact on foreign policy or any power that the President might have to recognize foreign sovereigns.  The ZOA argued that it was difficult to conceive of how listing Israel on a Jerusalem-born American citizen’s passport would impermissibly infringe on foreign policy or on any presidential power to recognize foreign sovereigns.

The State Department’s denial of that right is – as Attorney Nathan Lewin called it – a ‘misguided policy,’ particularly since the ZOA’s amicus brief showed that many federal government departments and agencies recognize in their own documents that Jerusalem is in Israel.

The ZOA’s brief also showed that the State Department’s policies and practices for issuing passports are irrational, arbitrary, and even offensive when it comes to Israel.  The Department generally requires that the country with current sovereignty over a citizen’s birthplace should be listed on the citizen’s passport, regardless of when the birth occurred.  But for U.S. citizens born in Tel Aviv or Haifa, for instance – cities that are indisputably under Israeli sovereignty – the State Department will overlook its policy and defer to a citizen’s preference not to identify with Israel, by listing the city as the birthplace instead.  Unfairly, the State Department will not honor the preferences of Americans born in Jerusalem who want to identify with Israel by listing it as their birthplace.

Morton A. Klein, the ZOA’s National President, and Susan B. Tuchman, Esq., the Director of the ZOA’s Center for Law and Justice, stated:  “We could not be more disappointed with the decision of the Court of Appeals – refusing to enforce a law that Congress passed and the President signed – which gives Americans born in Jerusalem the right to identify their birthplace as Israel on their passports.  The State Department’s denial of that right is – as Attorney Nathan Lewin called it – a ‘misguided policy,’ particularly since the ZOA’s amicus brief showed that many federal government departments and agencies recognize in their own documents that Jerusalem is in Israel.

“As the Court of Appeals’ decision reveals, there is an important constitutional issue that the Supreme Court must decide.  We thank the Zivotofsky family and their distinguished legal team for their continuing commitment to enforcing the rights of American citizens born in Jerusalem, Israel’s capital.  The ZOA was the only Jewish organization to take formal legal action to implement the Jerusalem passport law.  We will continue to support the Zivotofskys in their efforts to enforce it.

“Many thanks to ZOA national board member David I. Schoen, Esq., who was counsel of record on the ZOA’s brief and provided valuable assistance in preparing it.”

We would love to hear from you! Please fill out this form and we will get in touch with you shortly.
Trending Z
Uncategorized July 26, 2013
ZOA Analysis: Most American Rabbis Who Are Boycotting Some Israeli Ministers Are From Extremist Left Wing Groups (J Street; T’ruah; JVP)
Uncategorized July 26, 2013
ZOA: Israel’s Reasonable Judicial Reform Proposals Are Good for Democracy, the Rule of Law and the Economy
News July 26, 2013
ZOA is Disappointed, Offended and Frightened by 211 U.S. House Votes Supporting Jew-Hating, Israel-Hating Rep. Ilhan Omar
Uncategorized July 26, 2013
Israel’s “Right of Return” Grandparent Clause is De-Judaizing the Jewish State – Eliminate It
Center for Law & Justice
We work to educate the American public and Congress about legal issues in order to advance the interests of Israel and the Jewish people.
We assist American victims of terrorism in vindicating their rights under the law, and seek to hold terrorists and sponsors of terrorism accountable for their actions.
We fight anti-Semitism and anti-Israel bias in the media and on college campuses.
We strive to enforce existing law and also to create new law in order to safeguard the rights of the Jewish people in the United States and Israel.
Our Mission
ZOA STATEMENT
The ZOA speaks out for Israel – in reports, newsletters, and other publications. In speeches in synagogues, churches, and community events, in high schools and colleges from coast to coast. In e-mail action alerts. In op-eds and letters to the editor. In radio and television appearances by ZOA leaders. Always on the front lines of pro-Israel activism, ZOA has made its mark.
Related Articles
OP-ED BY: Morton A. Klein Hagel Blames Israel for Palestinian Terrorism