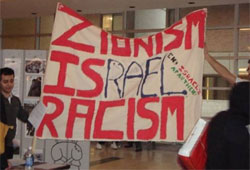 With the start of a new school year, there’s reason to be concerned:  Anti-Semitism is a serious problem on some college campuses, causing Jewish students to feel threatened and even fear for their safety.  Yet the U.S. government is not enforcing the law to protect them.

Legal protection exists, at least in theory.  After a six-year battle by ZOA and others, the U.S. Department of Education’s Office for Civil Rights (OCR) issued a 2010 policy that Title VI of the Civil Rights Act would be enforced to protect Jewish students and students of other religious/ethnic groups who are harassed at publicly-funded schools.

In the case filed by the ZOA against UC Irvine, Jewish students were physically threatened and assaulted.  One student was surrounded by Arab students who cursed and threatened, “I am going to kill you, you f__king Jewish bitch.”  Another Jewish student endured screams of “Go back to Russia where you came from,” “Burn in hell,” and F__king Jew.”  A Holocaust memorial was vandalized.  Posters obscenely proclaimed that “Zionism is Nazism” and equated the Star of David with the swastika.  A huge sign on the main walkway said, “Israelis Love to Kill Innocent Children.”  The Israeli flag was displayed dripping with blood.  Speakers regularly vilified Jews and Israel, comparing Jews to Satan and referring to them as “the new Nazis.”  These anti-Semites spoke from the center of campus, their speeches amplified, so they were virtually impossible to avoid.

Courageous Jewish students came forward and described these and other horrific incidents to OCR investigators.  Students said they were afraid to openly express they were Jewish or pro-Israel.  Some stayed away from campus, feeling isolated, unwelcome and afraid.  Two former students told OCR that they left Irvine and transferred elsewhere because they could no longer endure the hostility.

Students also told OCR that they repeatedly tried to get university officials to address the problems, to no avail.  One student wrote to administrators, demanding that her physical safety be protected.  The only official who responded suggested that she visit the counseling center, as if she were the problem!

Given the evidence, it’s almost impossible to understand how OCR could conclude that Jewish students’ right to a safe and non-hostile campus environment had not been violated.  But OCR did just that, in a cursory one-page letter.

OCR’s contemporaneous dismissal of the Title VI cases against UC Berkeley and UC Santa Cruz is also troubling.  At Berkeley, a Jewish student was holding a sign that said “Israel Wants Peace” when she was rammed from behind with a loaded shopping cart by someone with a known history of anti-Jewish incitement and intimidation.  The student required medical attention.  Jewish students were subjected to mock checkpoints, where anti-Israel students – dressed as Israeli soldiers and holding fake guns (itself a legal violation) – blocked the walkway, stopping students to ask if they were Jewish before deciding whether to let them pass.  Administrators took no action when Jewish students repeatedly complained about feeling threatened and afraid.

At Santa Cruz, Jewish students were subjected to anti-Semitic hostility in the classroom that the university itself was promoting.  Professors and academic departments funded and sponsored one-sided anti-Israel programs, and discouraged students from learning about perspectives that weren’t anti-Israel.  One professor violated university rules by tearing down flyers announcing an event about Palestinian children being trained as suicide bombers.  Despite numerous complaints, the university refused to address the hostile environment.

OCR’s indifference to anti-Semitism on the UC campuses is a far cry from how the government has responded to incidents targeting other minorities.  For instance, after acts hostile to African-Americans at UC San Diego, OCR and the Justice Department initiated an investigation on their own – even though university officials had already investigated the incidents and issued public condemnations, and perpetrators were held accountable.

OCR’s failure to enforce Title VI to protect Jewish students may be a response to forceful pressure from outside groups who falsely claim that the rank anti-Semitism on campus is legitimate political discourse, and that enforcing Title VI to remedy a hostile environment for Jewish students will unconstitutionally stifle protected speech.

Let us be clear that Title VI is not being used to silence criticism of Israel.  Students are complaining about threats and assaults, about vandalism, and about the promotion of Nazi-like propaganda lies about Jews and Israel, inside and outside the classroom.  Students object to denials of Israel’s right to exist and calls for its destruction.  These are all manifestations of anti-Semitism, according to the U.S. government’s own standards.

Let us also be clear that no one is calling for the suppression of free speech.  We have consistently urged university officials to exercise their own free speech rights to publicly condemn anti-Semitic incidents, as well as the perpetrators.  We know from years of working with Jewish students that their colleges’ silence in response to anti-Semitism is as hurtful as the anti-Semitism itself, because it sends the message that demonizing Jews and Israel is acceptable and will be tolerated.

Our government seems to have abandoned Jewish students.  Contact your representatives in Congress, who oversee OCR.  They should be demanding that OCR take campus anti-Semitism seriously and vigorously enforce Title VI, so that publicly-funded colleges will no longer tolerate the ugly environment harming Jewish students.

We would love to hear from you! Please fill out this form and we will get in touch with you shortly.
Trending Z
News September 3, 2013
ZOA Condemns U.S. State Dept. & U.S. Amb. Nides For Siding with Antisemitic, Discriminatory Palestinian & Hamas Terrorists re: the Temple Mount, Violating Jews’ Religious Freedom
Uncategorized September 3, 2013
FLASH: ISRAEL-JORDAN PEACE TREATY (1994) GUARANTEES JEWS ACCESS TO THE TEMPLE MOUNT – LET MY PEOPLE PRAY
Uncategorized September 3, 2013
ZOA Analysis: Most American Rabbis Who Are Boycotting Some Israeli Ministers Are From Extremist Left Wing Groups (J Street; T’ruah; JVP)
Uncategorized September 3, 2013
Israel’s “Right of Return” Grandparent Clause is De-Judaizing the Jewish State – Eliminate It
Center for Law & Justice
We work to educate the American public and Congress about legal issues in order to advance the interests of Israel and the Jewish people.
We assist American victims of terrorism in vindicating their rights under the law, and seek to hold terrorists and sponsors of terrorism accountable for their actions.
We fight anti-Semitism and anti-Israel bias in the media and on college campuses.
We strive to enforce existing law and also to create new law in order to safeguard the rights of the Jewish people in the United States and Israel.
Our Mission
ZOA STATEMENT
The ZOA speaks out for Israel – in reports, newsletters, and other publications. In speeches in synagogues, churches, and community events, in high schools and colleges from coast to coast. In e-mail action alerts. In op-eds and letters to the editor. In radio and television appearances by ZOA leaders. Always on the front lines of pro-Israel activism, ZOA has made its mark.
Connect with us
Sign up for our Newsletter