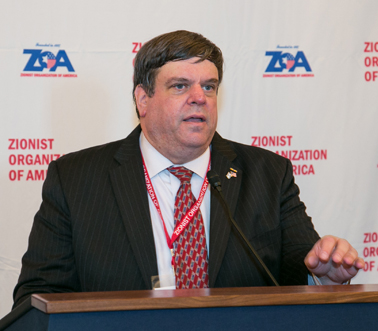 It was revealed recently that the Senate Banking Committee, in an appalling act of appeasement at the request of the Administration, is delaying consideration of new sanctions on Iran that were passed in July.  The delay appears to be  a result of the phone call between President Obama and Iranian President Hassan Rouhani, and the impending negotiations session scheduled for October 15-16 in Geneva.  (http://www.reuters.com/article/2013/10/01/us-usa-iran-sanctions-idUSBRE9901F620131001) Senator Mark Kirk (R-IL), the leading advocate for sanctions in the US Senate, issued a statement opposing the delay:

“The Senate should not aid and abet a European appeasement policy by softening our sanctions while the world’s leading sponsor of terrorism races toward a nuclear weapons capability,” (http://www.buzzfeed.com/rosiegray/republican-senator-delaying-iran-sanctions-is-appeasement)

Senator Kirk is right, and the signal being sent by the Senate is extremely regrettable.  ZOA has been very clear that sanctions are not the ultimate solution to the problem of Iran.  They have been effective at penalizing the Mullahs’ regime, but virtually all experts agree that Iran has already decided to move forward with their nuclear ambitions even in the face of sanctions.  The only thing that might stop the nuclear program is a credible threat of force. The force itself would be a significant blow to the regime, but possibly even more significant to the unpopular clique running Iran is the reaction of the people of Iran to a significant attack.  According to the regime itself, they might be risking their entire revolution once bombs begin to fall on their nuclear facilities.

The best atmosphere would be one where Iran understands that they have more to lose by continuing their nuclear program than by ending it.

Unfortunately, no one in the world believes the US will make an attack on Iran under current circumstances.  The entire Syrian episode, regardless of how one views it, certainly sends a signal of American indecision and extreme reluctance to act, even when the President states it is in our interest to take military action.  Backing away from additional sanctions has the odd result of making our diplomacy less effective, since it appears we are begging the Iranians to reach an agreement with us.  If in fact the new sanctions were passed, that would make our resolve to actually take military action as a last resort slightly more believable. Let us be frank- if we are so concerned about the reaction of the Europeans to penalties on insurance and oil companies doing business with Iran, how believable is it that the US will take the criticism that will be directed at us following a military attack, or even support for an Israeli military attack?

The European Union foreign policy chief Cathy Ashton’s has requested that the U.S. not further sanction Iran before Geneva talks in order to “get to Geneva with the best possible atmosphere to really have these negotiations.”  This is beyond self-parody.  The best atmosphere would be one where Iran understands that they have more to lose by continuing their nuclear program than by ending it.

The proposed law (H.R. 850, Nuclear Iran Prevention Act of 2013), would eliminate some inappropriate commerce with Iran, but it’s real import is to demonstrate our resolve to prevent Iran from acquiring a military nuclear capability.  The Senate should move forward with the new sanctions as quickly as possible.

We would love to hear from you! Please fill out this form and we will get in touch with you shortly.
Trending Z
Uncategorized October 7, 2013
ZOA Analysis: Most American Rabbis Who Are Boycotting Some Israeli Ministers Are From Extremist Left Wing Groups (J Street; T’ruah; JVP)
Uncategorized October 7, 2013
ZOA: Israel’s Reasonable Judicial Reform Proposals Are Good for Democracy, the Rule of Law and the Economy
Uncategorized October 7, 2013
Israel’s “Right of Return” Grandparent Clause is De-Judaizing the Jewish State – Eliminate It
News October 7, 2013
ZOA is Disappointed, Offended and Frightened by 211 U.S. House Votes Supporting Jew-Hating, Israel-Hating Rep. Ilhan Omar
Center for Law & Justice
We work to educate the American public and Congress about legal issues in order to advance the interests of Israel and the Jewish people.
We assist American victims of terrorism in vindicating their rights under the law, and seek to hold terrorists and sponsors of terrorism accountable for their actions.
We fight anti-Semitism and anti-Israel bias in the media and on college campuses.
We strive to enforce existing law and also to create new law in order to safeguard the rights of the Jewish people in the United States and Israel.
Our Mission
ZOA STATEMENT
The ZOA speaks out for Israel – in reports, newsletters, and other publications. In speeches in synagogues, churches, and community events, in high schools and colleges from coast to coast. In e-mail action alerts. In op-eds and letters to the editor. In radio and television appearances by ZOA leaders. Always on the front lines of pro-Israel activism, ZOA has made its mark.
Connect with us
Sign up for our Newsletter