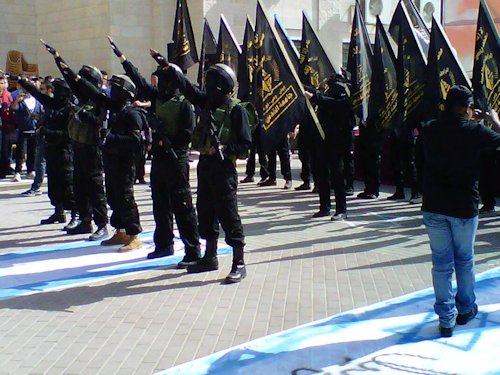 The Zionist Organization of America (ZOA) praised Syracuse University today for severing its relationship with the anti-Semitic, anti-Israel Al-Quds University in eastern Jerusalem. Syracuse is the second American university – after Brandeis University – to cut ties with Al-Quds, after a November 5th demonstration on the Al-Quds campus, where the demonstrators wore black military gear, held mock automatic weapons, and used the traditional Nazi salute, surrounded by banners with images of “martyred” suicide bombers.  In announcing its decision, Syracuse University stated that it “does not condone hatred or intolerance in any way.”

Brandeis University severed its relationship with Al-Quds University on November 18th, after the ZOA brought the Nazi-style demonstration at Al-Quds to Brandeis’ attention, as well as other events at Al-Quds that promoted anti-Semitism, the murder of Jews, and violence against the State of Israel.  In a letter to Brandeis President Frederick Lawrence, the ZOA noted that Al-Quds President Sari Nusseibeh – who is often falsely and absurdly described as a “moderate” – stated in an interview on Al-Jazeera TV that “no Jew in the world, now or in the future,” will ever be permitted to live in a Palestinian state.  Nusseibeh also praised mothers of suicide bombers – making it crystal clear, the ZOA stated, “that the university’s leader is sympathetic to and supportive of the Jew hatred on campus.”  The ZOA also provided Brandeis with information from Palestinian Media Watch (www.palwatch.org) – that in a recent Palestinian football tournament at Al-Quds University, the participating football teams were named after Jew-killing Arab terrorists – Yahya Ayyash, Dalai Mughrabi, and Ghassan Kanafani.  Ayyash, known as “the Engineer,” was the terrorist bomb-maker responsible for the 1995 murder of Brandeis student Alisa Flatow.

In announcing its decision, Syracuse University stated that it “does not condone hatred or intolerance in any way.”

Instead of clearly and unequivocally condemning the Nazi-style demonstration, Al-Quds University issued a provocative and hate-inciting statement, blaming “vilification campaigns by Jewish extremists.”  Al-Quds wrongly shifted the focus from the Jew hatred on its campus to the so-called ‘occupation’ of the Palestinian Arabs.

ZOA National President Morton A. Klein praised Syracuse University for cutting ties with Al-Quds University, stating, “Syracuse University made the right decision and the moral decision.  Syracuse has sent the message that it will not have any relationship with a university that will tolerate, justify and even support anti-Semitism and the incitement to murder and violence against Jews and Israel.”

David Drimer, ZOA’s National Executive Director, also praised Syracuse University, stating, “My daughter is a student at Syracuse University.  I know I speak for many parents of students at the school when I say we are proud that Syracuse has taken a clear stand against anti-Semitism.”

We would love to hear from you! Please fill out this form and we will get in touch with you shortly.
Trending Z
News November 26, 2013
ZOA Condemns U.S. State Dept. & U.S. Amb. Nides For Siding with Antisemitic, Discriminatory Palestinian & Hamas Terrorists re: the Temple Mount, Violating Jews’ Religious Freedom
Uncategorized November 26, 2013
FLASH: ISRAEL-JORDAN PEACE TREATY (1994) GUARANTEES JEWS ACCESS TO THE TEMPLE MOUNT – LET MY PEOPLE PRAY
Uncategorized November 26, 2013
ZOA Analysis: Most American Rabbis Who Are Boycotting Some Israeli Ministers Are From Extremist Left Wing Groups (J Street; T’ruah; JVP)
Uncategorized November 26, 2013
Israel’s “Right of Return” Grandparent Clause is De-Judaizing the Jewish State – Eliminate It
Center for Law & Justice
We work to educate the American public and Congress about legal issues in order to advance the interests of Israel and the Jewish people.
We assist American victims of terrorism in vindicating their rights under the law, and seek to hold terrorists and sponsors of terrorism accountable for their actions.
We fight anti-Semitism and anti-Israel bias in the media and on college campuses.
We strive to enforce existing law and also to create new law in order to safeguard the rights of the Jewish people in the United States and Israel.
Our Mission
ZOA STATEMENT
The ZOA speaks out for Israel – in reports, newsletters, and other publications. In speeches in synagogues, churches, and community events, in high schools and colleges from coast to coast. In e-mail action alerts. In op-eds and letters to the editor. In radio and television appearances by ZOA leaders. Always on the front lines of pro-Israel activism, ZOA has made its mark.
Related Articles
OP-ED ZOA Mourns Passing of Ariel Founder & Visionary, Ron Nachman