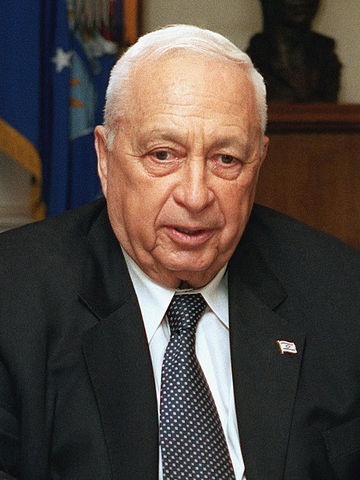 The Zionist Organization of America (ZOA) mourns the passing of Ariel Sharon, Israeli war hero and Prime Minister (2001-6), who passed away over the weekend at the age of 85, following a long coma brought on by a stroke in 2006. The ZOA praised Ariel Sharon as a fearless warrior, a brilliant military strategist and tenacious patriot, while also noting that his reputation had been marred by the 2005 unilateral withdrawal from Gaza and northern Samaria, which resulted in the uprooting of 10,000 Jews from their homes.

“Ariel Sharon was a superb general and fearless warrior for Israel in the formative wars of Israel’s existence. He probably had no peer as a strategist and his daring and successful military operations –– not least the crossing of the Suez Canal and the surrounding of the Egyptian Third Army during the Yom Kippur War in 1973 –– are still studied in military staff colleges like West Point here and Sandhurst in Britain today.

Ariel Sharon was a superb general and fearless warrior for Israel in the formative wars of Israel’s existence.

“Sharon was a tremendous patriot who sought to give Israel vital strategic depth and develop the Jewish communities in Judea and Samaria. As Defense Minister during the Lebanon War, which resulted in the expulsion of the PLO terrorists from Lebanon, Sharon was the focus of inappropriate international and internal criticism for the Sabra and Shatilla massacres conducted by Lebanese Christian militias in revenge for earlier slaughters of Christians by PLO forces. As the Wall Street Journal editorialized yesterday, ‘Sharon neither ordered nor knew of the attack, but it turned him into an international pariah.’

“On a personal note, I remember well that the widespread ostracism of Sharon affected him, more deeply perhaps than most people realize. I recall one occasion during the 1990s when Sharon was attending a major Jewish function in the U.S. He was seated in a corner, basically alone at a table. My wife Rita and I were the only ones who joined him.

“Given this fact, his political comeback is truly remarkable. With persistence and tenacity, he returned to the center of decision-making during the first Netanyahu government when he was appointed Foreign Minister. Following the disastrous failure of the Camp David and subsequent Taba negotiations during 2000-1, Sharon won a resounding election victory over Labor’s Ehud Barak.

“As Prime Minister, Sharon conducted, in the teeth of massive international focus and hostility, a  steady counter-terrorist campaign which virtually terminated the horrific Palestinian campaign of suicide bombing which had murdered many hundreds hundred and wounded and maimed thousands of Israeli civilians.

“Unfortunately, Sharon marred this brilliant achievement and his legacy by doing precisely what he had forthrightly opposed in his election campaign against Labor’s Amram Mitzna in 2003 –– making a major, unilateral concession to the Mahmoud Abbas’ Palestinian Authority. Mitzna had campaigned on a platform of unilateral withdrawal from most, not all, of the 15% of Gaza still remaining in Israeli hands in 2003 (Yitzhak Rabin had withdrawn Israeli forces from 85% of Gaza in 1994). Sharon opposed this, saying it would be a huge mistake yet, after decisively winning those elections, he decided to do the very same thing. In fact, he withdrew from all of the rest of Gaza, and part of northern Samaria, which was more than even Amram Mitzna had publicly proposed.

“The 2005 unilateral withdrawal from Gaza and northern Samaria gave the Palestinian terror groups a new lease of life and enhanced their status among Palestinians. 10,000 Jews were forcibly uprooted from their legal homes without adequate provision for their livelihoods and living quarters. Many of them are still living in temporary housing and without proper employment to this day. The vacuum in Gaza was filled by the Palestinian terrorist groups and rocket and mortar fire into southern Israel increased exponentially. Hamas has since taken over Gaza and about 10,000 rockets have been fired from gaza into Israel.

“Those of us, like me, who admired Ariel Sharon, never understood why he took this ruinous decision. After all, Sharon himself once told me in a private conversation that he could not understand how any Israel leader could advocate unilateral concessions. He knew such concessions were terrible mistakes that obtained Israel no security and which actually endangered Israelis.

“When he announced his intention to withdraw unilaterally from Gaza, I asked him his reasons. His response was odd. He started by strongly praising the courage and patriotism of the Jews of Gaza, but did not describe any advantages for Israel. When I pressed him, he simply said that he was under tremendous pressure and that he had to do something to appease his critics and ‘this was the easiest thing.’

“When I was once sitting with him at a dinner, he observed near us other tables filled with Jews wearing yarmulkes. He turned to me and said, rather sadly and with a great feeling of introspection, ‘When I see these religious Jews, I think to myself that I would have liked to have been a religious Jew and that, had my parents been religiously observant, today perhaps I would be religiously observant.’

“Clearly, Sharon felt deep in his heart not only for the Jewish state of Israel, but for Torah Judaism itself. He loved and cared for Israel, something all must recognize even if one cannot commend or celebrate every important decision that he made. With him, one of the last figures who was deeply involved in the fortunes of Israel from its founding has passed into history.”

We would love to hear from you! Please fill out this form and we will get in touch with you shortly.
Trending Z
News January 14, 2014
ZOA Condemns U.S. State Dept. & U.S. Amb. Nides For Siding with Antisemitic, Discriminatory Palestinian & Hamas Terrorists re: the Temple Mount, Violating Jews’ Religious Freedom
Uncategorized January 14, 2014
FLASH: ISRAEL-JORDAN PEACE TREATY (1994) GUARANTEES JEWS ACCESS TO THE TEMPLE MOUNT – LET MY PEOPLE PRAY
Uncategorized January 14, 2014
ZOA Analysis: Most American Rabbis Who Are Boycotting Some Israeli Ministers Are From Extremist Left Wing Groups (J Street; T’ruah; JVP)
Uncategorized January 14, 2014
Israel’s “Right of Return” Grandparent Clause is De-Judaizing the Jewish State – Eliminate It
Center for Law & Justice
We work to educate the American public and Congress about legal issues in order to advance the interests of Israel and the Jewish people.
We assist American victims of terrorism in vindicating their rights under the law, and seek to hold terrorists and sponsors of terrorism accountable for their actions.
We fight anti-Semitism and anti-Israel bias in the media and on college campuses.
We strive to enforce existing law and also to create new law in order to safeguard the rights of the Jewish people in the United States and Israel.
Our Mission
ZOA STATEMENT
The ZOA speaks out for Israel – in reports, newsletters, and other publications. In speeches in synagogues, churches, and community events, in high schools and colleges from coast to coast. In e-mail action alerts. In op-eds and letters to the editor. In radio and television appearances by ZOA leaders. Always on the front lines of pro-Israel activism, ZOA has made its mark.
Related Articles
OP-ED BY: Morton A. Klein Hagel Blames Israel for Palestinian Terrorism