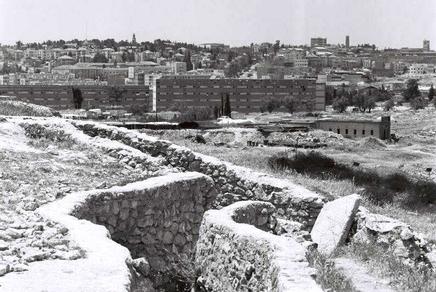 Every diplomat who visits Israel is inevitably brought to Yad Vashem, the dramatic and appropriate emotional high point of every trip to Israel.  Something is missing, though, in the lack of understanding of so many well-meaning foreigners who come to Israel.  After seeing the usual sights, they inevitably repeat the same tired diplomatic formula and too often fail to understand the relationship between the Jewish people and Jerusalem.  There is another destination that should be visited by every VIP as they come to Jerusalem, and that is Ammunition Hill, on the northern part of what in 1967 was Jordanian occupied eastern Jerusalem.

The hill was strategic, so along with the nearby Police Academy, it was fortified with stone trenches and manned by veterans of the Arab Legion.  On June 6, 1967, a very bloody battle was fought here, and the Israeli paratroopers who took the hill paid dearly for opening the Northern route to the Old City.  Due to the terrain and the prepared system of trenches, the stubborn defenders were able to inflict casualties on the paratroopers far in excess of normal rates.  About one-third of the elite soldiers in the reinforced company were wounded, and 36 were killed.

Israel paid a huge price in the blood of their most precious resource to take Jerusalem and Judea and Samaria from the enemy.

Now there is a memorial site there, and 182 olive trees were planted there to remember each of the soldiers killed in the fight for Jerusalem that week.  In the museum there is a photo and a metal plate inscribed with their brief biographies for each of the fallen.  In some cases, so little time passed between high school and their deaths that there is not much to say besides: “Ari loved to laugh, and his friends will miss his sense of humor.”   Others accomplished a great deal in their war-shortened lives.

The point is that Israel paid a huge price in the blood of their most precious resource to take Jerusalem and Judea and Samaria from the enemy.  You cannot stand at the base of those fortifications and look up at the trenches of Ammunition Hill and think casually of the sacrifice that was asked of these paratroopers.  You can also not calmly stand there and ask Israel to surrender Jerusalem or the rest of our people’s homeland in Judea and Samaria.  This ground was made sacred by what these soldiers did here.  American diplomats should be brought to Ammunition Hill, before they begin plotting their path to a Nobel Prize.  There are higher honors.

We would love to hear from you! Please fill out this form and we will get in touch with you shortly.
Trending Z
News January 21, 2014
New Biden Nominees Opposed Abraham Accords & Involved in Israeli Election Interference
Uncategorized January 21, 2014
ZOA Letter to DOJ & FBI on New “Mapping Project” Antisemitic Threat by ZOA Pres. Morton Klein, Dir. of Research/Special Projects Liz Berney, Esq., Dir. Center for Law & Justice Susan Tuchman, Esq.
News January 21, 2014
ZOA’s Condemnation of Black Lives Matter Defended by JNS’ Tobin: Jews Supporting BLM Empowered Antisemitism
Op-Ed January 21, 2014
ZOA’s Mort Klein JPost Op-Ed: BDS Mapping Project Targets Every Jew, Including Left Wing, Israelophobic Jews
Center for Law & Justice
We work to educate the American public and Congress about legal issues in order to advance the interests of Israel and the Jewish people.
We assist American victims of terrorism in vindicating their rights under the law, and seek to hold terrorists and sponsors of terrorism accountable for their actions.
We fight anti-Semitism and anti-Israel bias in the media and on college campuses.
We strive to enforce existing law and also to create new law in order to safeguard the rights of the Jewish people in the United States and Israel.
Our Mission
ZOA STATEMENT
The ZOA speaks out for Israel – in reports, newsletters, and other publications. In speeches in synagogues, churches, and community events, in high schools and colleges from coast to coast. In e-mail action alerts. In op-eds and letters to the editor. In radio and television appearances by ZOA leaders. Always on the front lines of pro-Israel activism, ZOA has made its mark.
Connect with us
Sign up for our Newsletter