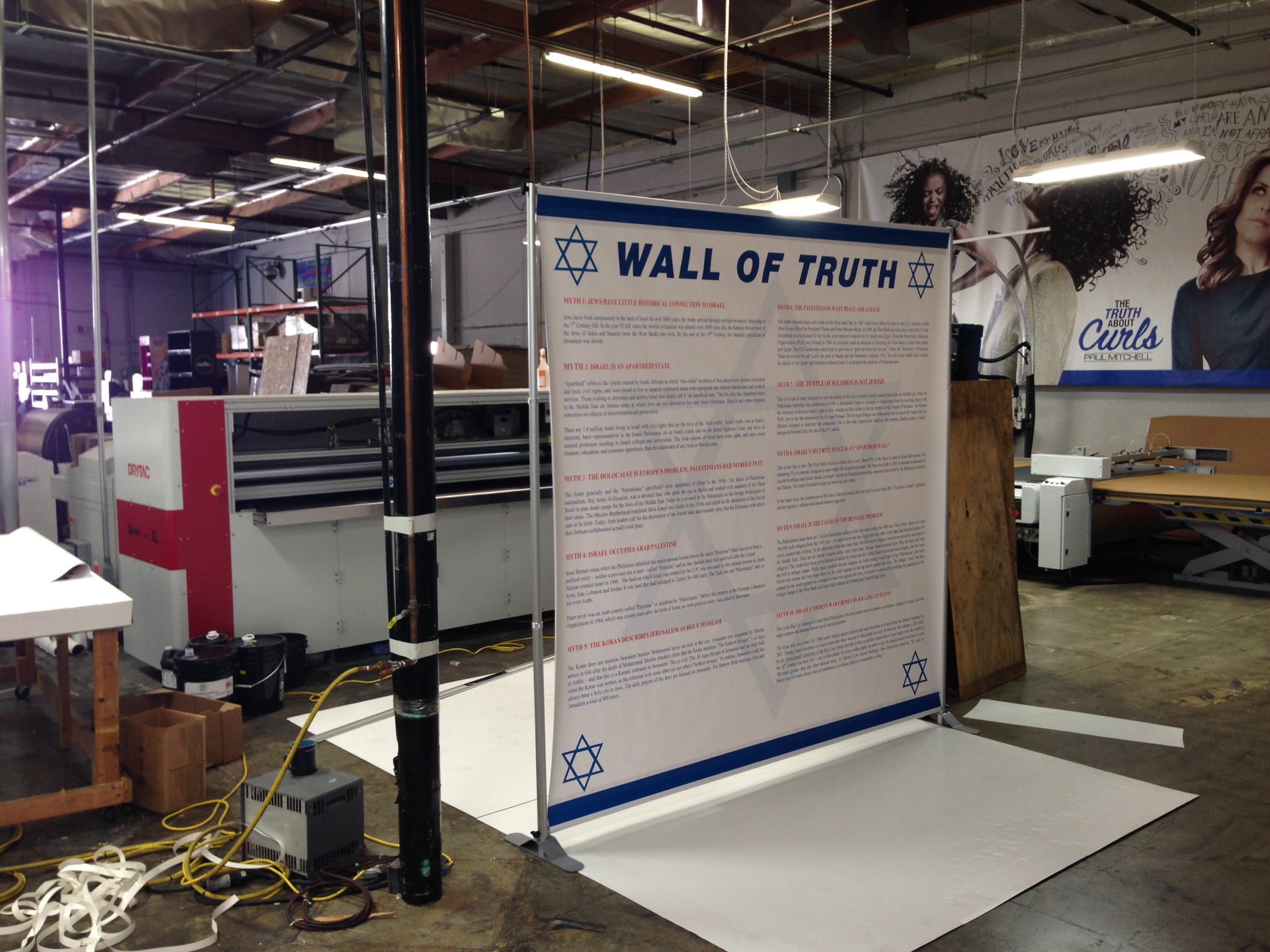 “Israeli Apartheid Week” is coming to your campus
Action Alerts

As you know, in the next month or two, “Israeli Apartheid Week” is probably coming to your campus. This is an event the pro-Palestinian student groups put on to defame Israel as an apartheid state that commits war crimes against the Palestinians. It is full of hate and lies about the Jewish State, and usually includes big banners and graphics that libel Israel in the middle of campus.

“…full of hate and lies about the Jewish State…”

Thankfully, ZOA has an effective way you can fight back against “Israeli Apartheid Week.” We have collaborated with the Freedom Center to revamp their great Wall of Truth banner. This is an 8 foot by 8 foot self-standing, professionally made banner that highlight and corrects the top 10 myths of the Arab-Israeli conflict.

Please see a picture of the banner and content below. This standing banner counters many of the lies that “Israeli Apartheid Week” perpetrates, and ZOA offers it to you totally free of charge to use on campus, along with handouts of the myths for students to take with them. We hope you will take advantage of this effective tool to defend Israel at your University.

Please contact me to reserve it for your campus.

Jews have lived continuously in the land of Israel for over 3000 years; the Arabs arrived through multiple invasions, beginning in the 7th Century AD. In the year 70 AD, when the Jewish civilization was already over 1000 years old, the Romans forced most of the Jews of Judea and Samaria (now the West Bank) into exile. By the end of the 19th Century, the majority population of Jerusalem was Jewish.

MYTH 2: ISRAEL IS AN APARTHEID STATE

“Apartheid” refers to the system created by South Africans in which “non-white” residents of that nation were denied citizenship and basic civil rights, and were forced to live in separate residential areas with segregated and inferior educational and medical services. Those wishing to demonize and destroy Israel now falsely call it “an Apartheid state.” But the only true Apartheid states in the Middle East are Islamic states in which Jews are not allowed to live and where Christians, Baha’is and other religious minorities are objects of discrimination and persecution.

There are 1.4 million Arabs living in Israel with civil rights that are the envy of the Arab world.  Israeli Arabs vote in Israel’s elections, have representatives in the Israeli Parliament, sit on Israeli courts and on the Israeli Supreme Court, and serve as tenured professors teaching in Israeli colleges and universities. The Arab citizens of Israel have more rights, and enjoy more freedom, education, and economic opportunity than the inhabitants of any Arab or Muslim state.

MYTH 3: THE HOLOCAUST IS EUROPE’S PROBLEM; PALESTINIANS HAD NO ROLE IN IT

The Arabs generally and the “Palestinians” specifically were supporters of Hitler in the 1930s. The father of Palestinian nationalism, Haj Amin Al-Husseini, was a devoted Nazi who spent the war in Berlin and worked with members of the Third Reich to plan death camps for the Jews of the Middle East. Today he is revered by the Palestinians as the George Washington of their cause. The Muslim Brotherhood translated Mein Kampf into Arabic in the 1930s and called for the destruction of the Jewish state at its birth. Today Arab leaders call for the destruction of the Jewish state and routinely deny that the Holocaust with which their forbears collaborated actually took place.

Nations created Israel in 1948.  The land on which Israel was created by the U.N. was also used by the colonial powers to create Syria, Iraq, Lebanon and Jordan. It was land that had belonged to Turkey for 400 years. The Turks are not “Palestinians” and are not even Arabs.

There never was an Arab country called “Palestine” or inhabited by “Palestinians.” Before the creation of the Palestine Liberation Organization in 1964, which was sixteen years after the birth of Israel, no Arab political entity was called by that name.

MYTH 5: THE KORAN DESCRIBES JERUSALEM AS HOLY TO ISLAM

The Koran does not mention Jerusalem because Mohammed never set foot in the city. Jerusalem was conquered by Muslim armies in 636 after the death of Mohammed. Muslim jihadists claim that the Koran mentions “The Furthest Mosque” — Al-Aqsa in Arabic – and that this is a Koranic reference to Jerusalem. This is a lie. The Al-Aqsa Mosque in Jerusalem had not been built when the Koran was written, so the reference is to some other (or any other) “furthest mosque.” In contrast, Jerusalem is and has always been a holy city to Jews. The daily prayers of the Jews are focused on Jerusalem. The Hebrew Bible mentions Zion and Jerusalem a total of 809 times.

MYTH 6: THE ARABS WANT PEACE AND A STATE ON THE WEST BANK

The Arabs rejected peace and a state on the West Bank first in 1948 when it was offered to them by the U.N. and then in 2000 when it was offered by Presidents Clinton and Barak. In 1949, the West Bank and Gaza Strip, which the U.N. had designated as a homeland for the Arabs, were annexed respectively by Jordan and Egypt. When the Palestinian Liberation Organization (PLO) was formed in 1964 its covenant made no mention of liberating the West Bank or Gaza from Jordan and Egypt. The PLO leadership stated that its goal was to “push the Jews into the sea.” Today the “liberation” of Palestine “from the river to the sea” is still the goal of Hamas and the Palestinian Authority (PA). The war in the Middle East is about the desire of the Arabs and Muslims to destroy Israel; it is not about the desire for a Palestinian state.

MYTH 7:  THE TEMPLE OF SOLOMON IS NOT JEWISH

This lie is one of many designed to steal the history of the Jews in order to justify erasing them from the Middle East. When the Palestinian Authority was established in 1994, it immediately began a campaign to delegitimize Israel by rewriting history with the intention of denying Israel’s right to exist. Among its false claims is that the remains of the Temple of Solomon – the Western Wall – are in fact the remnants of the Al-Aqsa Mosque. The Al-Aqsa Mosque was deliberately built on top of the Temple after the Muslim conquest to humiliate the conquered. This is the same imperialistic tradition that prompts jihadists today to build a mosque at Ground Zero, the site of the 9/11 attack.

This is two lies in one. The West Bank fence is a fence, not a wall. About 97% of the fence is made of chain-link material. The remaining 3% is concrete, designed to repel sniper fire in particular areas. The fence was built in 2003 in response to thousands of suicide bombings and rocket attacks on Israeli citizens by Palestinian terrorists, sponsored and armed by the Palestinian Authority and Hamas. The fence was built to keep out terrorists, not Arabs.

In the years since the construction of the fence, terrorist attacks have declined by more than 90%. The fence is Israel’s legitimate defense against a ruthless and amoral terrorist aggressor.

MYTH 9: ISRAEL IS THE CAUSE OF THE REFUGEE PROBLEM

The Palestinians claim there are 5 million Palestinian refugees who fled Israel during the 1948 war. This is false. There were only 500,000 Arab refugees from the 1948 war – an unprovoked war that Egypt and four other Arab states had launched against the newly created state of Israel. In the aftermath of the war, more than 500,000 Jewish refugees were driven out of the Arab states in the Middle East. There are no Jewish refugees today, sixty years later, because Israel resettled them. Why are there still Arab refugees? The Arabs have been given billions of dollars by Israel and the United States to relocate their refugees. But the Arabs are still in refugee camps. While Israel resettled Jewish refugees, no Arab country would take in the “Palestinians” who were forced into camps and were kept there by the Arab regimes to stir up hatred against the Jews. The refugee “issue” has been created by the Arab regimes as a weapon in their war against the Jews. It should be resolved by resettling the inhabitants of the refugee camps in the West Bank and Gaza where almost all of them have lived all their lives.

This is the Big Lie, coming as it does from Palestinians who have made terrorist attacks on civilians a weapon of choice, and who make martyrs and national heroes out of suicide bombers.

The Gaza strip was a base for 7,000 rocket attacks against schoolyards and townships in Israel before the Israelis responded in 2007. During Israel’s airstrikes on Gaza rocket sites there was one civilian death for every 30 terrorists. By contrast, a 2001 study by the International Committee of the Red Cross found that the civilian-to-military death ratio in wars fought since the middle of the 20th Century has been 10:1 – ten civilian deaths for every soldier death. In other words, the Israelis protect civilians at a rate 300 times greater than any other national army. As Harvard Law School Professor Alan Dershowitz observes, “No army in history has ever had a better ratio of combatants to civilians killed in a comparable setting.”

We would love to hear from you! Please fill out this form and we will get in touch with you shortly.
Trending Z
Uncategorized February 4, 2014
ZOA Analysis: Most American Rabbis Who Are Boycotting Some Israeli Ministers Are From Extremist Left Wing Groups (J Street; T’ruah; JVP)
Uncategorized February 4, 2014
ZOA: Israel’s Reasonable Judicial Reform Proposals Are Good for Democracy, the Rule of Law and the Economy
News February 4, 2014
ZOA is Disappointed, Offended and Frightened by 211 U.S. House Votes Supporting Jew-Hating, Israel-Hating Rep. Ilhan Omar
Uncategorized February 4, 2014
Israel’s “Right of Return” Grandparent Clause is De-Judaizing the Jewish State – Eliminate It
Center for Law & Justice
We work to educate the American public and Congress about legal issues in order to advance the interests of Israel and the Jewish people.
We assist American victims of terrorism in vindicating their rights under the law, and seek to hold terrorists and sponsors of terrorism accountable for their actions.
We fight anti-Semitism and anti-Israel bias in the media and on college campuses.
We strive to enforce existing law and also to create new law in order to safeguard the rights of the Jewish people in the United States and Israel.
Our Mission
ZOA STATEMENT
The ZOA speaks out for Israel – in reports, newsletters, and other publications. In speeches in synagogues, churches, and community events, in high schools and colleges from coast to coast. In e-mail action alerts. In op-eds and letters to the editor. In radio and television appearances by ZOA leaders. Always on the front lines of pro-Israel activism, ZOA has made its mark.
Connect with us
Sign up for our Newsletter