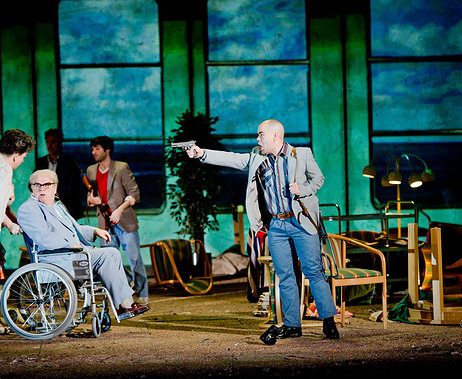 The Zionist of Organization of America urges the Metropolitan Opera of New York (the “Met”) to cancel its planned eight fall 2014 performances and worldwide broadcast of the anti-Semitic, anti-Israel opera “Death of Klinghoffer.”

“This anti-Semitic opera viciously falsifies history to malign and incite hatred against Israel and the Jewish people.  The opera is a disgrace and should be canceled immediately.”

“Death of Klinghoffer” opens by purveying a key “big lie” that has incited anti-Semitism and attacks on Israel for the past six decades since Israel’s rebirth.  The opera’s opening caption is “May 15, 1948, the day after Israel’s creation.”  An Arab chorus sings the opera’s first line: “my father’s house was razed in 1948,” and then speaks of how guests were always welcome to refresh themselves in the Arab home and its “pure well,” but none of the home’s walls are standing anymore because “Israel laid all to waste.”  Meanwhile, a little Arab girl supposedly watches Israeli soldiers brutally driving Arabs from their homes.  Arab women and children are shown fleeing for their lives, while Israeli soldiers are shown shooting, hitting innocent Arabs with rifle butts, chasing the fleeing Arabs, and slapping an old Arab woman who is sitting passively in the dirt, flattening pita dough.

The entire opening libretto and scene is of course a work of pure defamatory fiction, designed to malign Israel and the Jewish people.  Jews did not drive Arabs from Israel or raze Arab homes in 1948.  Instead, Jewish leaders begged the Arabs to remain in their homes and to live together in peace.  British police reports from the British headquarters in Haifa Israel at the time confirmed:

“Every effort is being made by the Jews to persuade the Arab populace to stay and carry on with their normal lives, to get their shops and their businesses open and to be assured that their lives and interests will be safe.”

“We will smash the country [Israel] with our guns and obliterate every place the Jews seek shelter in.  The Arabs should conduct their wives and children to safe areas until the fighting has died down.”

It was well known at the time that Arab leaders were responsible for Arab departures from Israel.  The Economist reported on Oct. 2, 1948:

“There is but little doubt that the most potent of the factors [resulting in most Arabs leaving Haifa] were the announcements made over the air by the Higher Arab Executive, urging the Arabs to quit. . . . It was clearly intimated that those Arabs who remained in Haifa and accepted Jewish protection would be regarded as renegades.”

If seven Arab nations had not invaded the fledging state of Israel in 1948 in an attempt to murder all its Jewish citizens and destroy the state of Israel, there would never have been a single Arab refugee.  The Arabs alone created the problem

In addition, at Arab leaders’ request, Britain helped with the voluntary Arab evacuation, providing trucks for a relatively orderly process.  The Arab departures bore no resemblance to the falsified scenes and lyrics in “Death of Klinghoffer” depicting Arabs fleeing for their lives from allegedly brutal Israelis.

Immediately after the opening scene, “Death of Klinghoffer” quickly spews forth more of the big lies often used to malign Israel, including extreme “Arab refugee number inflation.”  The next scene is captioned “1985:  3.7 Million Palestinians in Exile,” and again depicts fabricated brutal treatment of Palestinians by Israelis.  In fact, a detailed analysis of before-and-after Arab demographic data, by Dr. Walter Pinner, revealed that the number of legitimate Arab refugees was 367,000 as of 1966 – less than one-tenth of “Death of Klinghoffer’s” ultra-magnified propaganda numbers.  Moreover, even inflated British Arab population data was very close to Dr. Pinner’s numbers.  Moreover, by contrast to the fewer than 400,000 self-exiled Arab refugees, approximately one million Jews were forced to flee their homes in Arab lands by Arab anti-Semitic pogroms and decrees during the same time period.

Another seriously disturbing aspect of “Death of Klinghoffer” is the opera’s persistent attempts to humanize the terrorists, and equate and confuse the Palestinian murderers with their Jewish victims.  In performances of “Death of Klinghoffer,” the same actors/singers play both Palestinians and Jews, in a deliberate attempt to equate both sides.  An article on a performance of the opera in Brussels noted that the dual Palestinian/Jewish roles is only part of the intentional effort to confuse murderers with victims: “There is a blurring of physical identities.  The entire cast – principals, chorus and dancers – is dressed alike, in anonymous shirts, baggy trousers or skirts.”  In the DVD version, the hijacker who shoots Leon Klinghoffer in the head is sympathetically played by a handsome-looking man.  (In real life, the PLF (Palestine Liberation Front) terrorists who hijacked the Achille Lauro, such as Abu Abbas, were not attractive.)

Italian author and Auschwitz survivor Primo Levi wrote in his last book, The Drowned and the Saved (1986):

“[T]o confuse [murderers] with their victims is a moral disease or an aesthetic affectation or a sinister sign of complicity; above all, it is a precious service rendered (intentionally or not) to the negators of truth.”

The Hebrew words for art and artist, “ooman” and “oomanoot” relate to the concept of truth.  The words have the same root as “Amen” – which means “let this prayer be true.”  Art should be truthful.  It should not be used to spread anti-Semitic falsehoods which incite more Jew hatred in an era in which innocent Jews are frequently being violently attacked.

“If an opera attempted to justify the lynching or murder of an innocent black, gay or Hispanic man with false stories about blacks, gay people or Hispanics, the Met would never dream of staging such a racist or bigoted opera.  Maligned Jews deserve the same consideration that the Met would give to any other group.  Death of Klinghoffer is pure anti-Semitism.”

“Death of Klinghoffer” is particularly dangerous at this juncture.  We are living in perilous times.  Jews and Christians are being targeted and attacked throughout the world.  The growth in anti-Semitism has been particularly explosive.

In New York City, physical attacks on Jews tripled last year (2013).  “Knockout game” attacks specifically targeted Jewish children and elderly Jews in Brooklyn.  And this past April, on Passover eve, in the Overland Park Kansas City suburb, a gunman murdered innocent civilians at a Jewish center and Jewish retirement home.  Although the gunman’s intent was to murder Jews, the Overland Park victims were all Christian.  Those who are full of hatred towards Jews often end up murdering all humanity.

Anti-Semitic “incidents” occur in France and elsewhere in Europe virtually every day. Two weeks ago, on Saturday May 24, 2014, a jihadist murdered four innocent civilians at the Jewish Museum in Brussels, including two Israeli tourists.  The same evening, Muslims used brass knuckles to severely beat two young Jews who were leaving a suburban Paris synagogue.  Earlier this May, an Arab mother-and-daughter team attacked a Jewish girl at a Lyon laundromat when they noticed that the girl was wearing a Jewish star: the Arab adult held down the Jewish girl, while the Arab daughter yelled “Dirty Jew, go home” and severely beat the Jewish girl, causing injuries to the Jewish girl’s eyesight and hearing.  Just this week (June 10), an anti-Semitic gang attacked and tasered a Jewish teenager in Paris, and three men attacked two Jewish teenagers with teargas in Sarcelles.  In 2012, a jihadist murdered a Jewish rabbi and 3 children near a Jewish school in Toulouse.  And in Paris in 2006, a gang of 16 anti-Semites kidnapped, and then beat and tortured for 24 days and ultimately murdered a young innocent Jewish telephone salesman.

In this increasingly perilous environment, one would hope that America’s great cultural institutions would at the very least “do no harm.”  Unfortunately, however, the Metropolitan Opera’s eight planned prime time performances and worldwide broadcast of the anti-Semitic propaganda opera “Death of Klinghoffer” – which maligns Israel and justifies the murder of innocent Jews – is certain to add fuel to the raging fires of Jew hatred.

Other postings regarding “Death of Klinghoffer,” such as Myron Kaplan’s open letterto the Metropolitan Opera’s General Manager Peter Gelb, have pointed out additional extremely troubling issues with the opera, including the opera’s lyrics labeling Jews as fat, cheating, exploiters, defilers of virgins, defamers, etc., while the Palestinian murders are described as humane “men of ideals.”

ZOA and other groups will be protesting the Met’s performances and broadcast of the “Death of Klinghoffer.”   Please contact liz@zoa.org if you wish to participate.  Meanwhile, we urge you to call and/or write to:

And the Metropolitan Opera’s music director James Levine, as well as the Opera’s Board members, listed on the Met’s website at http://www.metoperafamily.org/metopera/about/whoweare/detail.aspx?customid=1 and below:

We would love to hear from you! Please fill out this form and we will get in touch with you shortly.
Trending Z
Uncategorized June 13, 2014
ZOA Analysis: Most American Rabbis Who Are Boycotting Some Israeli Ministers Are From Extremist Left Wing Groups (J Street; T’ruah; JVP)
Uncategorized June 13, 2014
ZOA: Israel’s Reasonable Judicial Reform Proposals Are Good for Democracy, the Rule of Law and the Economy
News June 13, 2014
ZOA is Disappointed, Offended and Frightened by 211 U.S. House Votes Supporting Jew-Hating, Israel-Hating Rep. Ilhan Omar
Uncategorized June 13, 2014
Israel’s “Right of Return” Grandparent Clause is De-Judaizing the Jewish State – Eliminate It
Center for Law & Justice
We work to educate the American public and Congress about legal issues in order to advance the interests of Israel and the Jewish people.
We assist American victims of terrorism in vindicating their rights under the law, and seek to hold terrorists and sponsors of terrorism accountable for their actions.
We fight anti-Semitism and anti-Israel bias in the media and on college campuses.
We strive to enforce existing law and also to create new law in order to safeguard the rights of the Jewish people in the United States and Israel.
Our Mission
ZOA STATEMENT
The ZOA speaks out for Israel – in reports, newsletters, and other publications. In speeches in synagogues, churches, and community events, in high schools and colleges from coast to coast. In e-mail action alerts. In op-eds and letters to the editor. In radio and television appearances by ZOA leaders. Always on the front lines of pro-Israel activism, ZOA has made its mark.
Connect with us
Sign up for our Newsletter