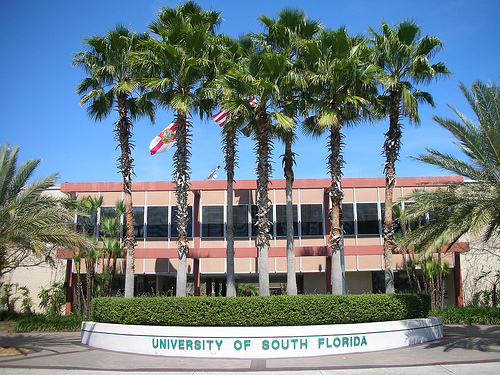 The University of South Florida (USF) is a popular choice for Jewish students. According to Hillel, it’s one of the top 30 public universities by Jewish population. But Jewish students and their parents should think twice about whether this school is right for them. Anti-Semitism is a problem on the campus, and although university officials are well aware of it, they seemingly could care less about it.

Last November, USF’s anti-Israel group — the so-called “Students for Justice in Palestine” (SJP) — sponsored a game show competition called “Battle of the Bulls,” modeled on the TV show “Jeopardy!” Seven other student organizations participated, and were asked to answer questions that promoted lies about Jews and Israel. According to The Oracle, USF’s student paper, the SJP prepared contestants for the questions in advance, showing them a video and articles with the “correct” answers.

There was nothing remotely educational about the game show. Its obvious purpose was to incite hatred of Jews and Israel. Questions falsely accused Israelis of “snatching” Palestinian children from their beds and “massacring” Palestinians on sacred Muslim ground. Another question falsely accused Israel of having roads that only Jews can use. Another referred to the “poisons that Israeli settlers put in Palestinian water supplies to make them undrinkable.” A few encouraged the falsehood that Jews and Israelis are racist, asking what the Jewish derogatory term for “African” was, and then calling on the contestants to repeat the slur when they were asked what Israelis called President Obama.

Even the categories of questions were anti-Semitic. One was entitled “blood profits” — an obvious reference to the ancient anti-Semitic “blood libel” that falsely accused Jews of murdering non-Jewish children and using their blood for ritual purposes.

The contestants had an incentive to endorse these anti-Semitic lies. The SJP awarded a$1,000 cash prize to the “winning” group, to be donated to the group’s charity of choice. At the SJP’s suggestion, the “winner” donated the prize money to aid “Palestinian refugees.”

One Jewish student at the event was so troubled that she complained in a letter to the editor of the Oracle. At least one other student filed a formal grievance.

The USF administration thus knows all about this disgusting display of anti-Semitism. But it has said and done nothing about it — even after the Zionist Organization of America wrote to USF President Judy Genshaft, and then to the Board of Trustees, urging them to take a few reasonable steps, none of which would impinge on anyone’s First Amendment rights.

First, we pressed USF leaders to exercise their own First Amendment rights and publicly condemn the anti-Semitic hatred and bigotry that the SJP promoted last November, as well as all the student groups that shamefully participated. Publicly speaking out is not a novel concept; even the ACLU, a group committed to fiercely protecting our First Amendment freedoms, urges campus administrators to speak out loudly and clearly against expressions of bias and bigotry.

Second, the ZOA urged USF to investigate the $1,000 cash prize. Where did the SJP get this money? To whom was the money donated? Was it a legitimate charity?

Finally, the ZOA urged USF to investigate precisely what occurred at the anti-Semitic game show. If the investigation revealed that university policies were violated, then USF should hold the wrongdoers accountable.

Genshaft did not even bother to respond to the ZOA’s letter herself. A USF lawyer responded on her behalf, but she did not express even the slightest concern about the hatred or the monstrous lies promoted on the USF campus. Her response was filled with platitudes about USF’s respect for “diverse interests, viewpoints and ideas” — as if USF should respect and tolerate diverse interests, viewpoints and ideas that foster the hatred of Jews and the Jewish State of Israel. The response did not condemn the game show as anti-Semitic, nor did it mention the words “Jews,” “Jewish” or “Israel” even once.

The ZOA then wrote to USF’s Board of Trustees, but their response was no better. The Board expressed “regret” that the anti-Semitism offended the ZOA and “our constituents.” There was no hint that the Board itself was offended!

USF claims to be committed to a tolerant and respectful campus. But we see no indication that the university administration actually stands behind those principles.

Jewish students should thus think twice before deciding to attend USF. And community members and alumni should reconsider donating money to a school that shows such indifference and callousness toward campus anti-Semitism.

In addition, the Jewish community — and everyone who believes that our college campuses must be respectful, welcoming, and physically and emotionally safe for all students — should contact USF and let the university know that the administration cannot ignore or justify anti-Semitism. Tell President Genshaft and the Board of Trustees that they must speak out and condemn campus anti-Semitism, in the same way that they would and should speak out if African Americans, women, or gays were targeted. Tell them they should be standing behind their own policies, and enforcing them against students and student groups who harass or intimidate other students because of their race, religion or ethnicity.

Tuchman is director of the Center for Law and Justice and Klein is national president, Zionist Organization of America.

We would love to hear from you! Please fill out this form and we will get in touch with you shortly.
Trending Z
News June 16, 2014
ZOA Condemns U.S. State Dept. & U.S. Amb. Nides For Siding with Antisemitic, Discriminatory Palestinian & Hamas Terrorists re: the Temple Mount, Violating Jews’ Religious Freedom
News June 16, 2014
ZOA’s Klein JPost Op-Ed: There is Nothing Extreme About Israel’s New Government
Uncategorized June 16, 2014
FLASH: ISRAEL-JORDAN PEACE TREATY (1994) GUARANTEES JEWS ACCESS TO THE TEMPLE MOUNT – LET MY PEOPLE PRAY
Uncategorized June 16, 2014
ZOA Analysis: Most American Rabbis Who Are Boycotting Some Israeli Ministers Are From Extremist Left Wing Groups (J Street; T’ruah; JVP)
Center for Law & Justice
We work to educate the American public and Congress about legal issues in order to advance the interests of Israel and the Jewish people.
We assist American victims of terrorism in vindicating their rights under the law, and seek to hold terrorists and sponsors of terrorism accountable for their actions.
We fight anti-Semitism and anti-Israel bias in the media and on college campuses.
We strive to enforce existing law and also to create new law in order to safeguard the rights of the Jewish people in the United States and Israel.
Our Mission
ZOA STATEMENT
The ZOA speaks out for Israel – in reports, newsletters, and other publications. In speeches in synagogues, churches, and community events, in high schools and colleges from coast to coast. In e-mail action alerts. In op-eds and letters to the editor. In radio and television appearances by ZOA leaders. Always on the front lines of pro-Israel activism, ZOA has made its mark.
Connect with us
Sign up for our Newsletter