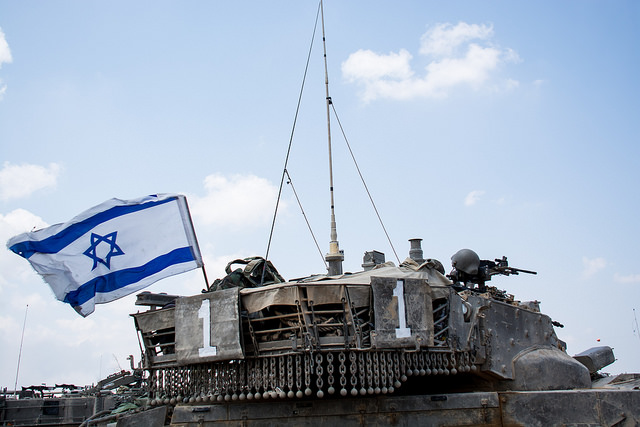 Pres. Obama’s Claim That He Supports Israel’s Right to Defend Itself seems Hollow, As He Demands Ceasefire Now
Press Release

July 23, New York: The Zionist Organization of America (ZOA) painfully realizes that President Barack Obama’s claim that he supports Israel’s right to self-defense against the Nazi-like Hamas seems both hollow and false, because he is now demanding an immediate ceasefire. This means President Obama is opposed to Israel completing the mission it undertook, which is yet far from complete, to destroy the Hamas terror tunnels into Israel and its rocket-launchers. If Israel does not complete this mission, it will render the mission a failure and Israel will remain in danger of mass casualty attacks, kidnappings and resultant extortion of concessions and further missile attacks in the future, as Hamas will determine.

This means that President Obama is saying that Israel has a right to defend itself, but must stop defending itself.

Israel must make the decision for a ceasefire –– not the U.S. If the U.S. was in this situation, the U.S. would have to determine the pursuit of a ceasefire, not Israel, or Russia or China.

President Obama is backing a plan for an immediate ceasefire that has been proposed, not by Egypt, which opposes Hamas, but by the Qatari and Turkish regimes –– two strong supporters of Hamas and antagonists of Israel, which would give Hamas concrete gains and reward its aggression and terrorism. The Washington Post reported that “the United States is quietly urging amending it [the earlier Egyptian ceasefire proposal] to make it more attractive to Hamas” (Sudarsan Raghavan, Anne Gearen and Ruth Eglash ‘Missing Israeli soldier, canceled flights could shift dynamic of Gaza conflict,’ Washington Post, July 22, 2014)

This contrast sharply with President Obama saying, as he did earlier, that “We support [Israel’s] military efforts to make sure more rockets aren’t being fired … No nation should accept rockets being fired into its borders or terrorists tunneling into its territory … Our understanding is the current military ground operations are designed to deal with the tunnels.”

ZOA National President Morton A. Klein said, “President Obama first spoke about making ‘sure that rockets aren’t being fired’ and ‘dealing with tunnels.’ Now all this has been subordinated to ‘an immediate ceasefire’ – and Israel’s rights and vital interests have been thrown out the window.

“President Obama is saying that Israel has a right to defend itself, but must stop immediately defending itself.

“Accordingly, President Obama does not really support Israel right to defend itself –– something which in any case is a natural right for all countries and which cannot be conferred or denied by President Obama or anyone else.

“If Germany was firing missiles into Poland, no-one would say that Poland has a right to defend itself and deal with the aggression until the aggression ceases; it would be obvious.

“Here, where Israel isn’t even fighting a legitimate country, but a recognized Nazi-like terrorist organization which calls in its Charter for the murder of every Jew, that specializes in the war crimes of deliberately attacking civilians and shielding its own forces among civilians, people seem to think that Israel’s right to defend itself is conditional and can be withdrawn by others.

“By calling for an immediate ceasefire, irrespective of the attainment of Israel’s legitimate objectives, President Obama has withdrawn the support for Israeli self-defense that he previously stated.

“We no longer have any confidence in Obama’s oft-heard proclamation that ‘I have Israel’s back.’ By working for a ceasefire that would preserve Hamas’ 9,000 missiles and numerous terror tunnels, he seems to have Hamas’ back.

“Israel sent in ground troops last week after discovering that Hamas has created a network of tunnels enabling terrorists to enter Israel and conduct mass-casualty terror attacks. One tunnel the Israelis discovered was rigged with bombs located directly under Israeli kindergartens.

“This is a new level of threat to Israel and Israel needs time to destroy Hamas’ networks of tunnels.

“Rocket launchers and the terrorists using them can be targeted from the air, but the only reliable way to detect and eliminate tunnels from Gaza into Israel is on the ground.

“The job of eliminating these newly-discovered tunnels is far from complete. Accordingly, Obama’s turnabout in the midst of this ground operation, during which even more extensive Hamas tunnel networks have been uncovered, reveals his support for Israeli action to have been hollow.

“If President Obama truly supports Israel’s measures to stop rocket assaults and destroy the tunnels by which Hamas would conduct mass casualty attacks inside Israel, he needs to say that he will support Israel’s efforts to achieve these objectives. He needs to say that he wants a ceasefire only after that has occurred and that he supports Gaza’s demilitarization –– not an immediate ceasefire. He is not saying this. He is not standing by Israel in confronting and eliminating massive new threats to its population.”

We would love to hear from you! Please fill out this form and we will get in touch with you shortly.
Trending Z
News July 23, 2014
ZOA Deplores that Pres. Trump Dined with Jew-Haters Kanye West & Nick Fuentes, and Demands he Condemn Them
Uncategorized July 23, 2014
ZOA Honors Trump With Rarely Given Herzl Award for His Great Pro-Israel Work – Joins Ranks of Balfour, Truman, Begin, Meir, Ben-Gurion
News July 23, 2014
ZOA Responds to Questions About Pres. Trump, Kanye West, Fuentes, etc. Issue
Uncategorized July 23, 2014
Zionist Organization of America Honors Donald Trump for Support for Israel, Jewish Community
Center for Law & Justice
We work to educate the American public and Congress about legal issues in order to advance the interests of Israel and the Jewish people.
We assist American victims of terrorism in vindicating their rights under the law, and seek to hold terrorists and sponsors of terrorism accountable for their actions.
We fight anti-Semitism and anti-Israel bias in the media and on college campuses.
We strive to enforce existing law and also to create new law in order to safeguard the rights of the Jewish people in the United States and Israel.
Our Mission
ZOA STATEMENT
The ZOA speaks out for Israel – in reports, newsletters, and other publications. In speeches in synagogues, churches, and community events, in high schools and colleges from coast to coast. In e-mail action alerts. In op-eds and letters to the editor. In radio and television appearances by ZOA leaders. Always on the front lines of pro-Israel activism, ZOA has made its mark.
Connect with us
Sign up for our Newsletter