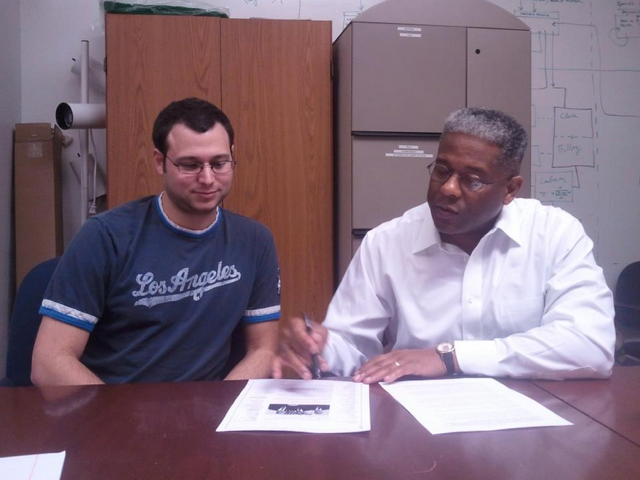 “Just got a call about the possibility of flying over to Israel next week to speak regarding the current conflagration facing our best ally. What an incredible and special honor it would be to be able to personally let the people of Israel know that we stand with them I can think of no more critical time for me to be in Israel and the Middle East, to lend my voice and support to liberty, freedom, and the promise of “never again.” And to my brother and sister Warriors in the IDF, I have only one request, and that is to be able to visit with you in southern Israel and shake your hand — especially Artillery and Paratroop units. I also hope to visit with the families of the two dual citizenship — American and Israeli — IDF Soldiers who gave the last full measure of devotion to God and country.

As I have stated firmly, there is no equivocating on this issue, either you stand with Israel or with Islamic totalitarians and jihadists. And I also want to express my support to the leadership and people of Egypt for making the stand against our common enemy, the Muslim Brotherhood. I find it appalling that our current administration is not releasing the promised Apache attack helicopters to you, while they released tanks and fighter jets to the Morsi government.

The phone call really touched my heart and the FAA better not put a travel restriction in place at the last minute — then again, I am jump qualified!

I had the pleasure and honor of working with Col. West for a year at PJTV before I left to assume my position with ZOA as Executive Director of the Western Region. After working closely with him, and following his career, I am constantly amazed by his loyal and outspoken support for Israel and the Jewish people. Col. West has moral clarity about the Arab war against Israel, and the courage to express his views on the matter, like few others in America.

Thank you Col. West for your unequivocal support for Israel during this difficult time. I wish there were more people like you in government.

We would love to hear from you! Please fill out this form and we will get in touch with you shortly.
Trending Z
News July 25, 2014
ZOA Condemns U.S. State Dept. & U.S. Amb. Nides For Siding with Antisemitic, Discriminatory Palestinian & Hamas Terrorists re: the Temple Mount, Violating Jews’ Religious Freedom
News July 25, 2014
ZOA’s Klein JPost Op-Ed: There is Nothing Extreme About Israel’s New Government
Uncategorized July 25, 2014
FLASH: ISRAEL-JORDAN PEACE TREATY (1994) GUARANTEES JEWS ACCESS TO THE TEMPLE MOUNT – LET MY PEOPLE PRAY
Uncategorized July 25, 2014
ZOA Analysis: Most American Rabbis Who Are Boycotting Some Israeli Ministers Are From Extremist Left Wing Groups (J Street; T’ruah; JVP)
Center for Law & Justice
We work to educate the American public and Congress about legal issues in order to advance the interests of Israel and the Jewish people.
We assist American victims of terrorism in vindicating their rights under the law, and seek to hold terrorists and sponsors of terrorism accountable for their actions.
We fight anti-Semitism and anti-Israel bias in the media and on college campuses.
We strive to enforce existing law and also to create new law in order to safeguard the rights of the Jewish people in the United States and Israel.
Our Mission
ZOA STATEMENT
The ZOA speaks out for Israel – in reports, newsletters, and other publications. In speeches in synagogues, churches, and community events, in high schools and colleges from coast to coast. In e-mail action alerts. In op-eds and letters to the editor. In radio and television appearances by ZOA leaders. Always on the front lines of pro-Israel activism, ZOA has made its mark.
Connect with us
Sign up for our Newsletter