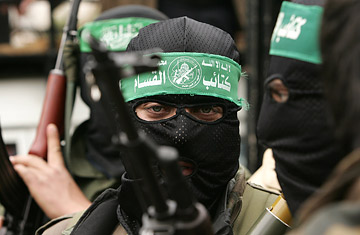 The Truth About Hamas’s War Against Israel
Special Reports

All Deaths Are Hamas’ Fault:   If Hamas did not launch unprovoked attacks against Israeli civilians, then Israel would not have been forced to respond defensively to protect its civilians.  Every death, both Arab and Israeli, is Hamas’s fault.

•  Intro: “Islam will obliterate [Israel].”;  “Our struggle against the Jews is very great and very serious.  It needs all sincere efforts . . . until the enemy is vanquished.”

• Article 7:  The Prophet . . . has said: ‘The Day of Judgement will not come about until Moslems fight the Jews (killing the Jews), when the Jew will hide behind stones and trees. The stones and trees will say O Moslems, O Abdulla, there is a Jew behind me, come and kill him.’”

• Article 13:  “so-called peaceful solutions . . . are in contradiction to the principles of the Islamic Resistance Movement. . . . There is no solution for the Palestinian question except through Jihad [war].”

Hamas Leaders Continue to Insist on Israel’s and Jews’ Destruction:

• The new Palestinian unity government “will not recognize ‘Israel’ and will not give up the resistance.” – Top Hamas official Hassan Yousef, 4/23/14

• [W]e will not cede a single part of Palestine [meaning all of Israel], we will not cede Jerusalem, we will continue to fight and we will not lay down our arms. . . . Hamas will not recognize Israel.” – Hamas Prime Minister Ismail Haniyeh, Jan. 2012, addressing rally in Tunis

•  Hamas, together with allies Palestinian Islamic Jihad (PIJ), People’s Resistance Committees and Fatah (Mahmoud Abbas’ party) fired over 15,000 rockets at Israeli civilian areas from 2001 through mid-July 2014, and 3,000 rockets in July-August 2014.  From 2004 – mid-July 2014 (prior to the recent war), Hamas rockets killed 28 Israelis and wounded over 1,900  Israelis, mostly civilians including children.  Victims include a 4-year-old boy and his grandfather, small children aged 2 and 4 who were killed while playing in the street, and teenage girl Ayala-Haya Abukasis who was killed while shielding her younger brother.

•  Hamas rockets target major Israeli population areas, including Ashkelon, Haifa, Tel Aviv, and Jerusalem, and Ben Gurion airport, as well as southern Israel towns.
•  On Aug. 3, 2014, Hamas’ threatened to fire rockets at all Israeli cities within range of its rockets.  Hamas indeed has been doing this.

•  The Israel Defense Forces (IDF) makes extraordinary efforts to avoid Palestinian civilian casualties, including: hundreds of thousands of robo-calls, texts and leaflets warning Palestinian civilians to evacuate targeted areas, and “roof-knocking” (hitting a building with a non-lethal strike as a warning to evacuate, before the target is destroyed).

•  Hamas tells or forces Palestinian civilians to ignore Israeli warnings, and to protect Hamas missiles with their bodies.

•  Although there are sparsely populated areas in Gaza from which Hamas could launch rockets, Hamas consistently instead uses civilian homes, mosques, schools, etc. for launching rockets, tunnel entrances, military stockpiles and booby-traps.

The IDF reported that on Aug. 2, Palestinian terrorists launched 11 mortars from right next to an UN elementary school in Zeitoun, Gaza.

•  On August 1, Hamas terrorists fired a rocket at Israel from the al-Mashtal hotel, which is frequented by foreign journalists in Gaza.

Hamas Broke 7 Recent Cease-Fires (including ones it called for):

• July 20: Hamas fired on IDF soldiers with anti-tank missiles and automatic fire, violating a 2-hour humanitarian ceasefire less than 40 minutes into the agreement.

• Aug. 1: Hamas emerged from a tunnel to ambush and kill 3 Israeli soldiers, 90 minutes after the start of a scheduled 72-hour cease fire.

• Aug.  19: Hamas breaks 24-hour cease fire extension scheduled to end at midnight by firing 50 rockets between before 4 p.m. and 11 p.m., including firing rockets at Tel Aviv, Jerusalem (where one landed), Ben Gurion airport and Ashkelon.

•  When Israel forcibly removed 9,000 Jews from their homes and unilaterally withdrew from every inch of Gaza in 2005, American Jewish donors bought (at a cost of $14 million) and transferred to the Palestinians over 3,000 high-tech greenhouses to provide Gazans with jobs, food and export income.  Hamas/the Palestinians promptly looted and destroyed the greenhouses.

•  Israel sends Gaza thousands of truckloads of food and humanitarian supplies (including 3,324 trucks of food and medicine from July 8, 2014 to mid-August 2014), and provides Gaza with electricity, even in the midst of war, while Hamas attacks Israel via tunnels and rockets.  On Aug. 3 alone, Israel sent Gaza 186 truckloads of supplies.  Year round, Israel transfers 100 sick Gazans per month to Israeli hospitals for medical treatment (or at the patients’ option, flies them to hospitals in Turkey after treating them at Ben Gurion airport).

•  The IDF set up a field hospital with advanced medical treatment capability which treats injured Gazans, in the midst of war, while Hamas continued attacking Israel.

•  On July 15, Israel’s Magen David Adom offered to collect blood from Israelis, or alternatively from Arabs, to send to Gaza, but the Palestinians rejected these offers.

•  Hamas “reports” grossly inflates civilian casualty figures by using the seemingly respectable name “Palestinian Ministry of Health” (which is really part of Hamas) or the United Nations (which does not make its own estimates but rather relies on Hamas’ propaganda figures).  Hamas counts terrorists as civilians, double and triple counts the same people, includes civilians killed by misfired Hamas rockets and as human shields, and invents casualties from whole cloth.  In fact, over half of the casualties are Hamas terrorists.  And Israel has done more that any army in history to protect civilian lives of its enemies.  Many media outlets accept false Hamas figures without examination.

•  Hamas “stages” (falsifies) casualties by moving bodies to schoolyards, and by claiming as “Palestinian” casualties pictures of Syrians killed by Assad, and pictures of the Israeli Fogel children whose necks were slit by Palestinian terrorists.

•  After leaving Gaza, a Spanish journalist revealed why footage of Hamas in action is absent: “It’s very simple. We did see Hamas people there, launching rockets.  They were close to our hotel, but if ever we dared pointing our camera on them, they would simply shoot at us and kill us.”

•  French-Palestinian journalist Radjaa Abu Dagga wrote that Hamas forcibly blocked him from leaving Gaza, detained and interrogated him in a room in Shifa hospital.  He then had his newspaper account removed for fear of Hamas retaliation.

•  Italian reporter Gabriele Barbati confirmed that Israel told the truth that Hamas rockets caused the Al-Shati refugee camp deaths (which Hamas lies blamed on Israel) only when he was out of Gaza, beyond the reach of Hamas retaliation.

•  After Australian reporter Peter Stefanovic tweeted he saw rockets fired into Israel from near his hotel, a pro-Hamas tweeter threatened: “In WWII, spies got shot.”

•  The UN confirmed that misfired Hamas rockets fell and exploded in a UN Beit Hanoun school area on July 24.  (Hamas caused the civilian deaths there.)

•  About 20-30 percent of Hamas rockets were misfired and landed or exploded inside Gaza, killing Arab civilians.  Hamas then blamed the deaths Hamas caused on Israel.

•  At a Beit Hanun UN school, Hamas terrorists fired anti-tank missiles at IDF soldiers from within the school complex, and the IDF only then responded with mortar fire (while the schoolyard was empty).

•  When dozens of Palestinians demonstrated against Hamas at al-Shifa hospital on July 28, Hamas extracted 20 protestors from the crowd and executed (shot) the protestors on the spot.  The next day, Hamas summarily executed more Arab civilians as “spies.”

truth about hamas war against Israel – on ZOA Monograph template (2)

We would love to hear from you! Please fill out this form and we will get in touch with you shortly.
Trending Z
News September 3, 2014
ZOA Condemns U.S. State Dept. & U.S. Amb. Nides For Siding with Antisemitic, Discriminatory Palestinian & Hamas Terrorists re: the Temple Mount, Violating Jews’ Religious Freedom
Uncategorized September 3, 2014
FLASH: ISRAEL-JORDAN PEACE TREATY (1994) GUARANTEES JEWS ACCESS TO THE TEMPLE MOUNT – LET MY PEOPLE PRAY
Uncategorized September 3, 2014
ZOA Analysis: Most American Rabbis Who Are Boycotting Some Israeli Ministers Are From Extremist Left Wing Groups (J Street; T’ruah; JVP)
Uncategorized September 3, 2014
Israel’s “Right of Return” Grandparent Clause is De-Judaizing the Jewish State – Eliminate It
Center for Law & Justice
We work to educate the American public and Congress about legal issues in order to advance the interests of Israel and the Jewish people.
We assist American victims of terrorism in vindicating their rights under the law, and seek to hold terrorists and sponsors of terrorism accountable for their actions.
We fight anti-Semitism and anti-Israel bias in the media and on college campuses.
We strive to enforce existing law and also to create new law in order to safeguard the rights of the Jewish people in the United States and Israel.
Our Mission
ZOA STATEMENT
The ZOA speaks out for Israel – in reports, newsletters, and other publications. In speeches in synagogues, churches, and community events, in high schools and colleges from coast to coast. In e-mail action alerts. In op-eds and letters to the editor. In radio and television appearances by ZOA leaders. Always on the front lines of pro-Israel activism, ZOA has made its mark.
Connect with us
Sign up for our Newsletter