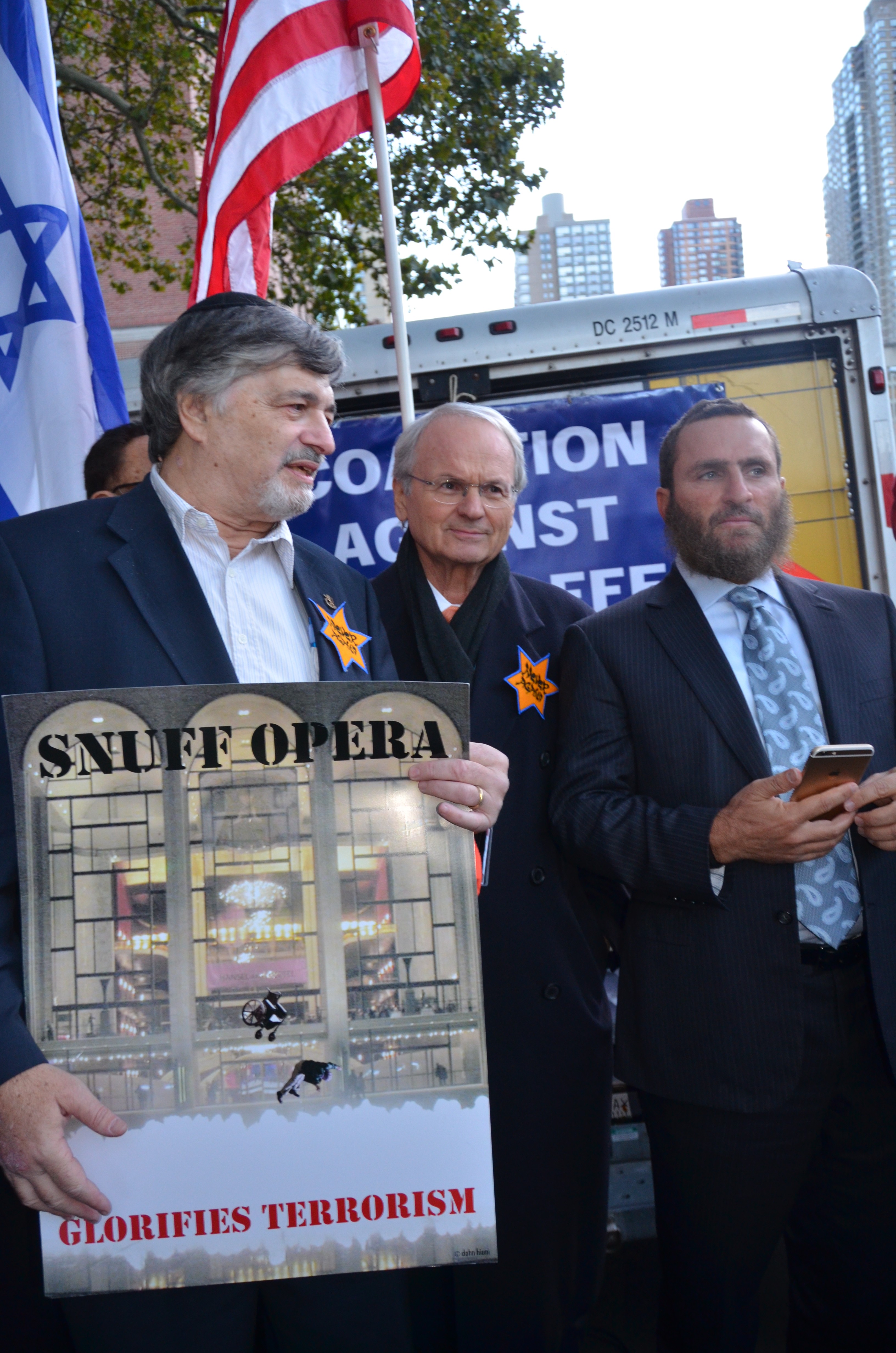 Defying picketers and audience disruptions, New York’s Metropolitan Opera has opened “The Death of Klinghoffer,” which explores the psyche of Palestinian hijackers who killed a wheelchair-bound US Jew.

Leading US composer John Adams operatized the 1985 seizure of the Achille Lauro cruise-liner as a way to explore the dueling grievances of Israelis and Palestinians. But “The Death of Klinghoffer” has outraged some Israel supporters who say it unduly humanizes murderers.

“Terrorism cannot be rationalized. It cannot be understood. It can never be tolerated as a vehicle for political expression or grievance.”

In an unusually tense display at the normally placid Lincoln Center, police stood guard in the lobby and set up barricades outside the entrance where picketers sat in wheelchairs in remembrance of Leon Klinghoffer, who was shot and thrown overboard by Palestinian hijackers demanding that Israel release prisoners.

The first act was briefly halted as an audience member repeatedly shouted, “The murder of Klinghoffer will never be forgiven!” Another person later yelled out a profanity and numerous spectators booed periodically during the opera, including when Adams himself came out during the curtain call, which mostly drew applause and a standing ovation.

The Met’s general manager Peter Gelb said he wanted to stage “The Death of Klinghoffer” because it was “one of the most powerful contemporary operas of the last 25 years” and insisted that the production clearly cast the killing as unjust.

“We will not allow this opera to be suppressed, since it is neither anti-Semitic nor a glorification of terrorism,” he wrote in a note in the audience’s playbill.

– No end to controversy –

Klinghoffer’s two daughters, allowed to present a counterpoint in the playbill, said that the opera “sullies the memory of a fine, principled, sweet man” who was on a Mediterranean vacation with their terminally ill mother.

“It presents false moral equivalencies without context and offers no real insight into the historical reality and the senseless murder of an American Jew,” they wrote.

“Terrorism cannot be rationalized. It cannot be understood. It can never be tolerated as a vehicle for political expression or grievance,” they wrote.

The Met said it hoped to start a conversation, with audience members encouraged to post their thoughts online.

In one nod to the criticism, the Met scrapped a planned broadcast of the opera in movie theaters around the world, with Gelb saying that the transmission would be “inappropriate at this time of rising anti-Semitism, particularly in Europe.”

“The Death of Klinghoffer” has been controversial since its premiere in 1991 at La Monnaie in Brussels but the latest production has come under particular fire. The Met is one of the world’s leading opera companies, New York has a large Jewish community and the production comes at a time of especially heated passions over the Israeli-Palestinian conflict.

The Met production did not shy away from current events, with the set designed by Tom Pye evoking the Israeli-built separation wall in the West Bank. When a chorus of Palestinians sing of their people’s struggles, key dates flash on the wall including 2014 — a potential reference to the recent Gaza bloodshed.

The production maintains some of the opera’s most provocative scenes, including when a gunman sings that “America is one big Jew” after Klinghoffer — played at the Met by British baritone Alan Opie — accuses the hijackers of being purely out for blood.

But one of the most criticized parts –in which a Jewish family in New Jersey chats glibly about the hijacking — was taken out soon after the 1991 premiere.

Hundreds of protesters rallied outside the Met, with some holding images of a wheelchaired man ready to be thrown from the roof of the Lincoln Center.

“This has been an operatic Kristallnacht,” said Morton Klein, president of the Zionist Organization of America, referring to the orchestrated 1938 attacks against Jews in Germany and Austria.

“This is nothing less than an anti-Semitic, anti-Israel propaganda opera disguised cleverly in the high culture of an opera,” he said.

De Blasio said that he worried “greatly” about anti-Semitism, especially in Western Europe, but added: “I don’t think an opera is what the focal point should be right now.”

“I think the American way is to respect freedom of speech, simple as that,” he told reporters.

We would love to hear from you! Please fill out this form and we will get in touch with you shortly.
Trending Z
News October 22, 2014
ZOA Condemns U.S. State Dept. & U.S. Amb. Nides For Siding with Antisemitic, Discriminatory Palestinian & Hamas Terrorists re: the Temple Mount, Violating Jews’ Religious Freedom
News October 22, 2014
ZOA’s Klein JPost Op-Ed: There is Nothing Extreme About Israel’s New Government
Uncategorized October 22, 2014
FLASH: ISRAEL-JORDAN PEACE TREATY (1994) GUARANTEES JEWS ACCESS TO THE TEMPLE MOUNT – LET MY PEOPLE PRAY
Uncategorized October 22, 2014
ZOA Analysis: Most American Rabbis Who Are Boycotting Some Israeli Ministers Are From Extremist Left Wing Groups (J Street; T’ruah; JVP)
Center for Law & Justice
We work to educate the American public and Congress about legal issues in order to advance the interests of Israel and the Jewish people.
We assist American victims of terrorism in vindicating their rights under the law, and seek to hold terrorists and sponsors of terrorism accountable for their actions.
We fight anti-Semitism and anti-Israel bias in the media and on college campuses.
We strive to enforce existing law and also to create new law in order to safeguard the rights of the Jewish people in the United States and Israel.
Our Mission
ZOA STATEMENT
The ZOA speaks out for Israel – in reports, newsletters, and other publications. In speeches in synagogues, churches, and community events, in high schools and colleges from coast to coast. In e-mail action alerts. In op-eds and letters to the editor. In radio and television appearances by ZOA leaders. Always on the front lines of pro-Israel activism, ZOA has made its mark.
Related Articles
OP-ED Gov. Pataki Speaks At Rally Opposing Anti-Semitic Met Opera – ZOA Quoted