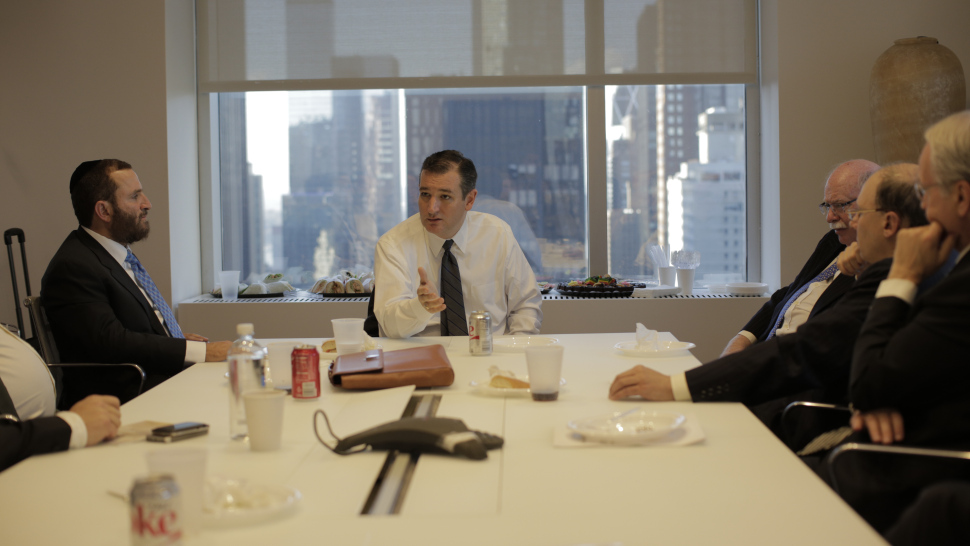 Jewish life in New York is dominated by ritual. Holidays. A pastrami reuben on a hero at Katz’s. The reading of holy books in cycles that take a year (the Torah) or seven and a half years (the Talmud). And just as reliably, there’s the ritual of presidential candidates sniffing around for dough right after the midterm elections.

That last one got going in earnest yesterday and today, with Senator Ted Cruz of Texas making a whirlwind tour of power Jews in New York City.

Today, there were some bigger surprises for the promising junior senator, who is widely understood to be considering a run for the Republican presidential nomination in 2016, including both the firepower and the political leanings of those from the Jewish community who made time for Mr. Cruz.

The Observer can report that Mr. Cruz had a private two-hour meeting with the most highly sought-after donor of all. After sitting next to Sheldon Adelson, the billionaire owner of the Venetian casino who was the single largest donor to Republican causes in 2012, at Sunday night’s ZOA dinner, Mr. Cruz and Mr. Adelson met for two hours this morning at the Palace Hotel on Madison Avenue. According to one source close to Mr. Adelson, the casino owner liked Mr. Cruz but found the senator “too right wing” and concluded he is a longshot to win the nomination.

Another surprise is that Mort Zuckerman, the developer and owner of the New York Daily News who usually backs moderate Democrats, hosted Mr. Cruz for a lunch yesterday before the ZOA dinner.

And then a final surprise show of interest in a candidate who would perhaps have appeared outside the usual centrist spectrum of Jewish political giving. Michael Steinhardt—the investing legend and megaphilanthropist who chaired the same Democratic Leadership Council that catapulted Bill Clinton to the White House—hosted Mr. Cruz at his investment firm’s office.

The Observer noted several attendees seemed to arrive with doubts similar to Mr. Adelson’s enthusiastically nodding assent as Mr. Cruz addressed questions on topics ranging from Israel to Harry Reid to his own electability in a possible 2016 presidential run.

Mr. Cruz poured himself a Diet Coke, removed his jacket, and jumped right in. “There are times in history that are inflections. Basic forks in the road that have far-reaching consequences. I think 2016 is going to be one of those elections.”

Mr. Boteach said, “You are arguably the strongest US Senator when it comes to Israel. But if you run, can you win? You’re seen as a champion of the tea party. And the media tends to caricature.”

Mr. Cruz replied, “Historically, the media has had two caricatures of Republicans. We are either stupid or evil.”

“Sometimes both!” volunteered one of the lunchers.

Mr. Cruz laughed and continued. “Reagan was stupid, according to the media. George W. Bush, Dan Quayle, stupid. Nixon was evil, Cheney was evil. I sort of take it as a backhanded compliment that they’ve invented a new caricature for me – crazy. At the end of the day, that caricature doesn’t trouble me because it’s fundamentally false. The American people have a history of making up their own minds.”

Mr. Cruz told the group that as groups who might be skeptical—like the one in this room—come to know him, doubts will be dispelled and stereotypes will be shattered.

And again, the Gipper comes up. “If you look back, in October of 1980, the American people were told Reagan was a wild-eyed cowboy who’s going to lead us into World War Three. People tuned in and watched the debate and said, ‘you know what? I agree with that guy.’”

As the crowd pressed, Mr. Cruz surprised at least some in the room with a proclamation.

“I don’t think I’m all that conservative. And it’s interesting. Reagan never once beat his chest and said ‘I’m the most conservative guy who ever lived.’ Reagan said, ‘I’m defending common sense principles—small businesses, small towns.’”

When it came to Israel and the US, Mr. Steinhardt reflected the concern dominating the room. “On some levels, things are good. The U.S. Stock market at an all-time high, real estate in New York is near that, the art market is insane. But what is not wonderful is the mood. I’m not sure I have an answer. The two-state solution looks remote. And if that doesn’t happen, what is going to happen?”

The senator made his living litigating before the Supreme Court before heading to Washington. So he knew how to play to the room with appropriate outrage about the Obama administration’s perceived deficits on the Jewish state. For example, he cited a case in which a Jewish family wants to list “Jerusalem, Israel” on its son’s passport. Deploying a mindboggling analogy before the highest court, the Soliciter General likened Israel’s claim over Jerusalem to Russia’s claim on Crimea.

From the 34th Floor of Mr. Steinhardt’s 5th Avenue office, Mr. Cruz thundered, “That is a grotesque and offensive analogy. This administration has been the most antagonistic toward Israel in memory.” He also said, “Standing for Israel is a deep passion of mine. But it’s also a manifestation of a basic principle that if I say I’m with you I’m really with you.”

And then Mr. Cruz, whose parents were both mathematicians, gave the crowd what it wanted by delving into some “path to victory” stuff. And threw in a cheeky anecdote.

“Look at recent elections—2004, which is the last time Republicans won. Yes, demography matters. I got 40% of the Hispanic vote in Texas at the exact same time Romney was getting 27% nationwide. But the biggest difference are the millions of conservatives who showed up in ’04 and stayed home in ’08 and ’12. An awful lot of them are working-class voters who frankly are getting screwed. Blue-collar voters who are getting hammered. Last night at the hotel, I went up to my room with a buddy of mine, we ordered a couple glasses of wine from room service. The waiter came up, a Puerto Rican waiter in New york. He walked in and said, ‘Senator, I fricking love you, you gotta run in ’16.’ A Puerto Rican waiter in New York!”

Jerry Levin, past president of the UJA, revealed that he is not only a “born Texan” but a “born conservative.” He came right to the point: “How can you win? Can we help you? Is there a plan?”

“In this last election [the Democrats] chose between two traditional children of the Democratic party. They chose between California environmentalist billionaires and the jobs of union members. We just had a vote on the Keystone pipeline, where Harry Reid threw Mary Landrieu under the bus, and said, ‘I’m happy to have you lose your seat ’cause I ain’t willing to give up the $100 million Tom Steyer is giving to Senate Democrats.’ You want to talk about millions of blue-collar workers who are getting screwed? Republicans should be the party fighting for the dignity of work. There’s incredible potential there.”

Lots of nodding, some note-taking, and then Mr. Cruz got specific.

“In my view, Hillary will be the Democratic nominee. And I think Hillary is every bit as radical as Obama is. I don’t think Bill is, I think Bill is genuinely more moderate. But I think Hillary is. So how does a Republican win in 2016? Einstein famously said the definition of insanity is doing the same thing over and over again and expecting a different result. If you look at the field in 2016, it’s going to be crowded field, there could be a dozen, there could be fifteen. There’s one bucket that, for lack of a better word, I’ll call the ‘moderate establishment’ bucket. It’ll be some combination of Chris Christie, Jeb Bush and Mitt Romney. My guess is two of the three will run. And my view is whoever’s in that bucket will raise tons of money. A lot of donors will rush to write them checks. And yet if the nominee comes from that bucket, the same voters who stayed home in 2008 and 2012 will stay home again and Hillary’s the winner.”

And then, one final invocation of Morning in America, and it was time for a roomful of very powerful men (and two or three women) to get back to work.

“Where we are today is very much like the late 1970s. The parallels between Obama and Carter are uncanny—same failed economic policy, same disastrous foreign policy. And I think ’16 will be like 1980. The way Reagan won was not by blurring the differences. He drew a line in the sand and with a positive, optimistic hopeful vision said we can get back to the principles that made America great. That’s how we win and that’s how we energize the people who are feeling dispirited.”

It was a whirlwind tour for a politician who has yet to turn 44. And somehow, Mr. Cruz wedged in time at the very end to meet with Elie Wiesel. One gets the sense that New York City has not seen the last of this ambitious Texas Republican.

We would love to hear from you! Please fill out this form and we will get in touch with you shortly.
Trending Z
Uncategorized November 25, 2014
ZOA Analysis: Most American Rabbis Who Are Boycotting Some Israeli Ministers Are From Extremist Left Wing Groups (J Street; T’ruah; JVP)
Uncategorized November 25, 2014
ZOA: Israel’s Reasonable Judicial Reform Proposals Are Good for Democracy, the Rule of Law and the Economy
Uncategorized November 25, 2014
Israel’s “Right of Return” Grandparent Clause is De-Judaizing the Jewish State – Eliminate It
News November 25, 2014
ZOA is Disappointed, Offended and Frightened by 211 U.S. House Votes Supporting Jew-Hating, Israel-Hating Rep. Ilhan Omar
Center for Law & Justice
We work to educate the American public and Congress about legal issues in order to advance the interests of Israel and the Jewish people.
We assist American victims of terrorism in vindicating their rights under the law, and seek to hold terrorists and sponsors of terrorism accountable for their actions.
We fight anti-Semitism and anti-Israel bias in the media and on college campuses.
We strive to enforce existing law and also to create new law in order to safeguard the rights of the Jewish people in the United States and Israel.
Our Mission
ZOA STATEMENT
The ZOA speaks out for Israel – in reports, newsletters, and other publications. In speeches in synagogues, churches, and community events, in high schools and colleges from coast to coast. In e-mail action alerts. In op-eds and letters to the editor. In radio and television appearances by ZOA leaders. Always on the front lines of pro-Israel activism, ZOA has made its mark.
Related Articles
OP-ED Fmr. Secy. Colin Powell: Defense Dept. Influences Presidential Policy