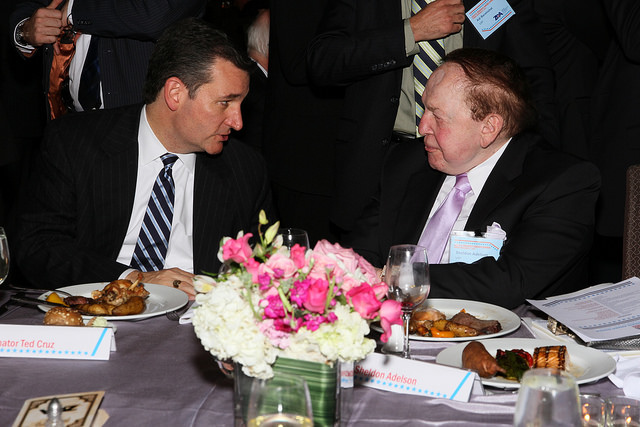 JTA Editorial About ZOA Dinner
ZOA in the news

The headliner was the annual dinner of the Zionist Organization of America, a can’t-miss night on the calendar, especially for those who unabashedly support Israeli settlements, believe Mahmoud Abbas and the Palestinian Authority are bent on destroying Israel, and think the Obama administration isn’t much better. The ZOA gig included an enthusiastic introduction from Alan Dershowitz (Cruz’s former professor at Harvard Law School). And there was a subsequent powwow with Elie Wiesel.

There are 535 members of Congress willing to sign on to a Mom-and-Apple Pie pro-Israel resolution, but few have taken the lead or rattled cages as often as Cruz in the past year.

Jewish votes — especially during Republican primary season and especially in New York — aren’t likely to be of much help to Cruz (or any GOP candidate for that matter). Jewish donors, however, can make a big difference — starting with casino magnate and mega-philanthropist Sheldon Adelson, widely reported to be the largest donor to Republican causes in 2012.

Cruz reportedly met privately with Adelson on Sunday morning and they sat together at the ZOA dinner. The New York Observer initially quoted a “source close to Adelson” as saying the casino owner liked Cruz, but found him “too right wing” and unlikely to win. Adelson, the CEO of Las Vegas Sands Corp., responded with a call to the Observer, insisting that he was “the only person in the room with Mr. Cruz and thus the only one in a position to know how he felt about the Senator.”

The senator was also the guest at private events hosted respectively by James Tisch and Michael Steinhardt, two businessmen-philanthropists seen as more centrist than Adelson. (The original version of this post mistakenly listed Mort Zuckerman as a host — a source tells me Tisch was the host, though Zuckerman was in attendance.)

According to the Observer, Cruz faced skepticism about his viability at the Steinhardt meeting (co-hosted by Rabbi Shmuley Boteach).

There seemed to be no such concerns at the ZOA dinner, where Cruz was the star of the show — no small accomplishment with the likes of Adelson, Boteach, Home Depot founder Bernie Marcus and Pastor John Hagee on the program (plus a touching acceptance speech from another award winner, the retiring Las Vegas Sands president Michael Leven, about his late grandfather’s immigrant struggles and devotion to Israel).

“The threats to Israel right now have never been greater,” Cruz said to nearly 1,200 guests in attendance. “We need leaders who will stand and act. Now more than ever is a time to strengthen the unshakable friendship and alliance that America has with Israel.”

Cruz, of course, was counting himself among those who are standing and acting. And whether you like his politics or not, it’s a fair claim. There are 535 members of Congress willing to sign on to a Mom-and-Apple Pie pro-Israel resolution, but few have taken the lead or rattled cages as often as Cruz in the past year.

Back in July, when the FAA banned U.S. flights to Israel after a Hamas rocket landed about a mile from Ben Gurion International Airport, plenty of people criticized the move. But Cruz ensured that the issue remained front and center by suggesting that Obama administration was essentially blackmailing Israel.  [UPDATE – FACT CHECK: At the ZOAdinner, Cruz reasserted his claim that the FAA hadn’t suspended flights over other hot spots, including Afghanistan, Yemen and eastern Ukraine. In fact, as we noted over the summer, the FAA has banned flights over eastern Ukraine and other war zones, and has issued standing warnings regarding air travel involving Yemen and Afghanistan. In addition, U.S. operators flying in, out or over Afghanistan “must obtain current threat information and comply with all applicable FAA regulations.”]

Then in September, Cruz generated headlines when he walked out of a conference dedicated to protecting Christianity in the Middle East, after he was heckled regarding his support for Israel.

Such steps, Cruz told the ZOA crowd of nearly 1,200 were part of his three-step program for having Israel’s back.

First, the senator said, he has focused on “rifle-shot accomplishments” aimed at securing strong bipartisan support for pro-Israel measures: For example, earlier this year, he introduced legislation barring Iran’s new ambassador to the United Nations, Hamid Aboutalebi, who participated in the 1979 seizure of the U.S. Embassy in Tehran, from entering the United States. The bill passed unanimously in the Senate and the House, and was signed by President Obama.

The second prong of his pro-Israel strategy, Cruz said, is to “lay out the direction we should be going.” So, while Cruz was an original sponsor of the stalled bipartisan legislation to tighten Iran sanctions, he also has introduced his own, tougher bill. Under Cruz’s bill, if Iran wants an end to sanctions, it needs to “disassemble every one of the 19,000 centrifuges, must hand over every pound of enriched uranium, it must shut down its ICBM program — which exists for one purpose and one purpose only, to carry a nuclear weapon to the United States or the nation of Israel — and it must stop being the world’s leading state sponsor of terror.”

The third component, Cruz said, is “telling the story,” such as when he took to the Senate floor last summer with posters of the three kidnapped Israeli teens.

The crowd ate it up, cheering and chanting for the Texas Republican, with some calling for a run in 2106. By most measures, Cruz is a long shot. But, judging from the enthusiastic response, if he does make it to the White House, it’s a sure bet he’ll be back at a ZOA dinner at some point during his first term.

We would love to hear from you! Please fill out this form and we will get in touch with you shortly.
Trending Z
Uncategorized December 2, 2014
ZOA Analysis: Most American Rabbis Who Are Boycotting Some Israeli Ministers Are From Extremist Left Wing Groups (J Street; T’ruah; JVP)
Uncategorized December 2, 2014
ZOA: Israel’s Reasonable Judicial Reform Proposals Are Good for Democracy, the Rule of Law and the Economy
News December 2, 2014
ZOA is Disappointed, Offended and Frightened by 211 U.S. House Votes Supporting Jew-Hating, Israel-Hating Rep. Ilhan Omar
Uncategorized December 2, 2014
Israel’s “Right of Return” Grandparent Clause is De-Judaizing the Jewish State – Eliminate It
Center for Law & Justice
We work to educate the American public and Congress about legal issues in order to advance the interests of Israel and the Jewish people.
We assist American victims of terrorism in vindicating their rights under the law, and seek to hold terrorists and sponsors of terrorism accountable for their actions.
We fight anti-Semitism and anti-Israel bias in the media and on college campuses.
We strive to enforce existing law and also to create new law in order to safeguard the rights of the Jewish people in the United States and Israel.
Our Mission
ZOA STATEMENT
The ZOA speaks out for Israel – in reports, newsletters, and other publications. In speeches in synagogues, churches, and community events, in high schools and colleges from coast to coast. In e-mail action alerts. In op-eds and letters to the editor. In radio and television appearances by ZOA leaders. Always on the front lines of pro-Israel activism, ZOA has made its mark.
Connect with us
Sign up for our Newsletter