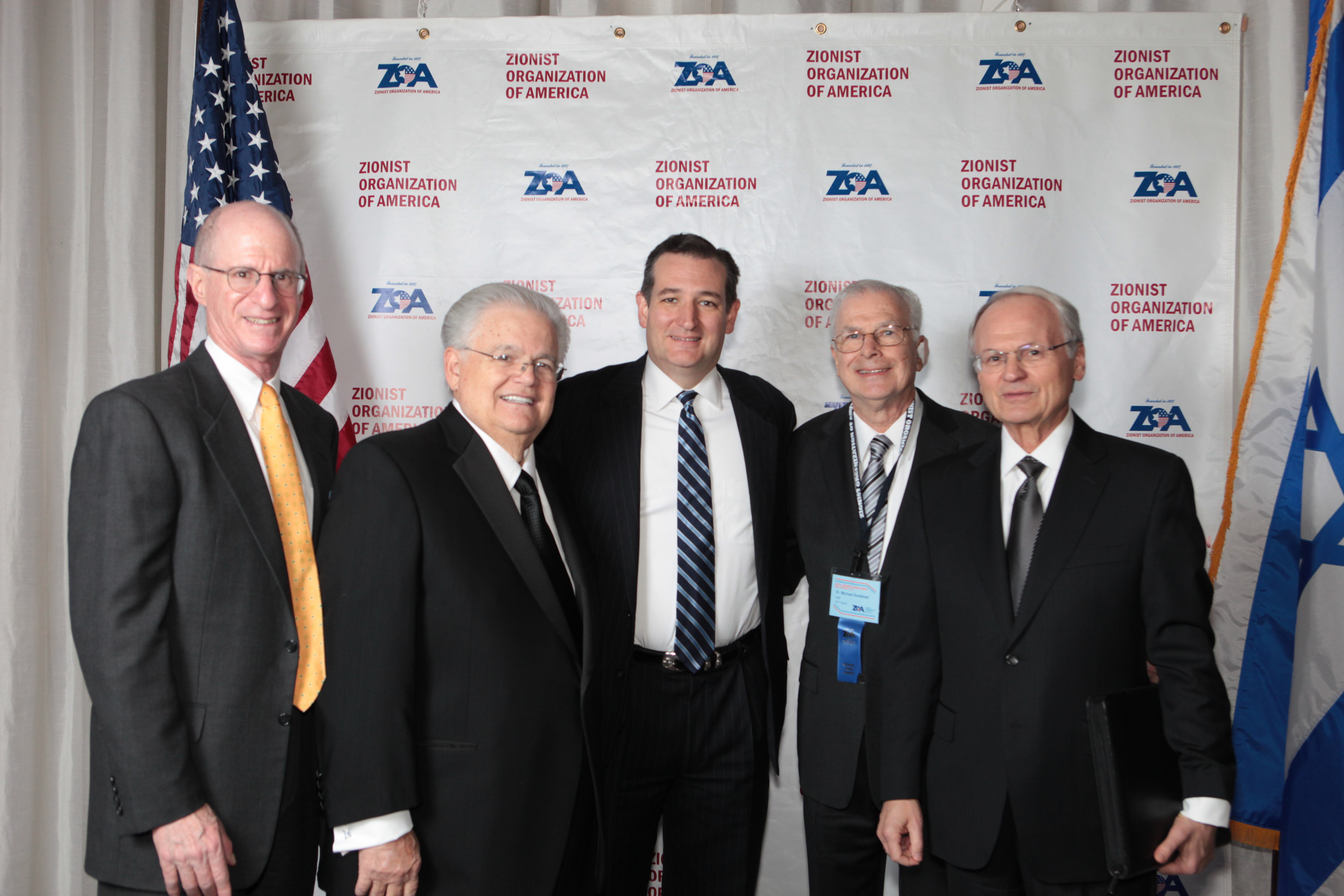 Senator Ted Cruz of Texas was the most exciting entrée that president Mort Klein dished up at his Nov. 23 Zionist Organization of America dinner at Manhattan’s Grand Hyatt.

The ballroom rocked with chants of “Run Ted Run! Run Ted Run!” Will these hordes of supporters pass the pushke to help fill Cruz’s coffers? Cheerleading burnishes the ego, but barrels of shekels churn out the votes.

Cruz’s rejoinder: “Alan Dershowitz was an incredible teacher who fiercely defends his principles, even when he’s wrong.”

Alan Dershowitz, who said he’s here as “a liberal Democrat and Zionist,” lauded his former Harvard law student: “Senator Cruz was one of my most brilliant students, an intellectual powerhouse. Even though we don’t agree on many issues, we agree on Israel.”

Cruz’s rejoinder: “Alan Dershowitz was an incredible teacher who fiercely defends his principles, even when he’s wrong.”

Dershowitz recalled “a great moment in modern American history” when Cruz rebuked a Christian advocacy group, In Defense of Christians (IDC), in September at a hotel in Washington. As the keynote speaker, Cruz attempted to support Israel when some Arab Christians heckled and booed and compelled him to cut his comments. “If you hate Israel, you hate America,” Cruz shot back. He added, “If you will not stand with Israel and the Jews, I will not stand with you,” and exited the ballroom in a huff.

Playing to the more welcoming ZOA crowd in New York, Cruz stated, “Jerusalem is the holy and eternal capital of Israel!” Cheers erupted from the audience. In fact, almost every statement elicited roars of approval.

An animated Cruz continued: “There is no equivalence between Jews being murdered and Palestinians being killed as a result of Israeli action in dealing with terrorism.”

The biggest threat to Israel and the United States, he insisted, is Iran’s rush to nuclear capability. “We are repeating the mistakes we made with North Korea, recruiting the same official from that debacle, Wendy Sherman, to negotiate another bad deal. If they ever acquire nuclear weapons — these zealots who glorify death and suicide — they will use those weapons over Tel Aviv and Los Angeles. They have a plan to annihilate the nation of Israel. This is lunacy.

“Under no circumstances will Iran be allowed to acquire a nuclear weapon. Iran will either stop or we will stop them.”

Pastor John Hagee, head of Christians United for Israel, with two million members, and pastor of Cornerstone Church in San Antonio with 20,000 members, had a message for President Obama: “Jerusalem has been the Jewish capital for 3,000 years. Telling Israel what it can and cannot do in Jerusalem is above your pay grade.”

And he had a message for Secretary of State John Kerry: “Your efforts to win the Nobel Prize at Israel’s expense have failed. It’s now time to cut off all aid to the Palestinians. A culture that celebrates the murder of three Israeli students — and four rabbis in a synagogue — is not worthy of statehood. That must not go unanswered.”

Tim Boxer was a columnist at the New York Post for two decades and has been writing a column for The Jewish Week for 35 years; he’s also editor of 15MinutesMagazine.com for 16 years. He is the author of Jewish Celebrity Hall of Fame, interviews of Hollywood stars about their Jewish roots.

We would love to hear from you! Please fill out this form and we will get in touch with you shortly.
Trending Z
News December 3, 2014
New Biden Nominees Opposed Abraham Accords & Involved in Israeli Election Interference
Uncategorized December 3, 2014
ZOA Letter to DOJ & FBI on New “Mapping Project” Antisemitic Threat by ZOA Pres. Morton Klein, Dir. of Research/Special Projects Liz Berney, Esq., Dir. Center for Law & Justice Susan Tuchman, Esq.
News December 3, 2014
ZOA’s Condemnation of Black Lives Matter Defended by JNS’ Tobin: Jews Supporting BLM Empowered Antisemitism
Op-Ed December 3, 2014
ZOA’s Mort Klein JPost Op-Ed: BDS Mapping Project Targets Every Jew, Including Left Wing, Israelophobic Jews
Center for Law & Justice
We work to educate the American public and Congress about legal issues in order to advance the interests of Israel and the Jewish people.
We assist American victims of terrorism in vindicating their rights under the law, and seek to hold terrorists and sponsors of terrorism accountable for their actions.
We fight anti-Semitism and anti-Israel bias in the media and on college campuses.
We strive to enforce existing law and also to create new law in order to safeguard the rights of the Jewish people in the United States and Israel.
Our Mission
ZOA STATEMENT
The ZOA speaks out for Israel – in reports, newsletters, and other publications. In speeches in synagogues, churches, and community events, in high schools and colleges from coast to coast. In e-mail action alerts. In op-eds and letters to the editor. In radio and television appearances by ZOA leaders. Always on the front lines of pro-Israel activism, ZOA has made its mark.
Connect with us
Sign up for our Newsletter