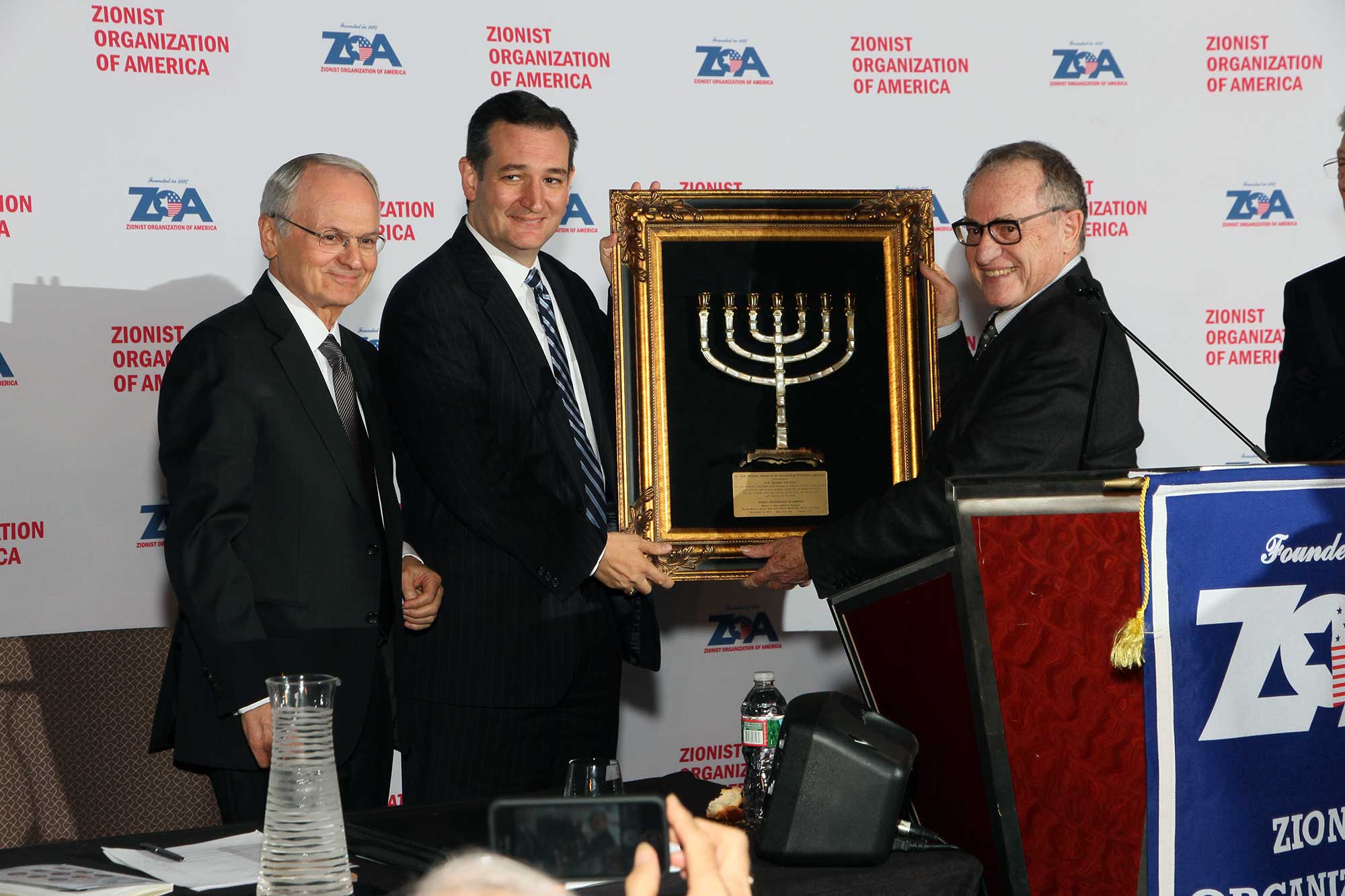 It has been reported that American Jews still voted overwhelmingly Democrat in the recent midterm congressional elections. At the same time, there is mounting evidence that increasing numbers of American Jews at the grassroots level have become disillusioned and in many cases outraged by the shabby manner in which the Obama administration has dealt with Israel over the past six months. This despite the fact that the American Jewish leadership establishment, including AIPAC, failed to criticize the biased and frequently hostile remarks against Israel expressed repeatedly by President Barack Obama.

Yet in contrast to the establishment, the ZOA has emerged over the past year as the front-runner of American Jewish organizations which consistently condemned the administration with respect to its Israel policies. This has resulted in many rank-and file American Jews, disappointed by the embarrassing silence of their leaders, no longer considering the ZOA to be a marginal or extremist group.

Dershowitz then stressed that “to be anti-Israeli is to be anti-American” and bitterly condemned “the moral equivalence which the president and Obama administration officials made between innocent Israeli victims of Hamas and Hamas terrorists killed in Israeli military strikes.”

The credit for much of this lies with the organization’s indefatigable leader, Mort Klein, who succeeded in transforming what had become an almost bankrupt organization into a dynamic political machine.

Klein was always nonplussed at being dismissed as an extremist and radical right-winger. Today, his followers are comparing him to Hillel Kook and the Bergson group, who in the 1940s orchestrated a public campaign to pressure the US government to act to save Jews being murdered during the Holocaust. Initially Kook, too, was condemned by the Jewish establishment as an extremist. In what is now regarded as a permanent blemish on the reputation of the American Jewish leadership, Rabbi Stephen Wise, then head of the Jewish community, warned against antagonizing the Roosevelt government and introduced the most extreme measures to try to muzzle Kook, and even sought to deport him.

Indeed, due to the apparent paralysis and unwillingness of the Jewish establishment to speak up, the ZOA today represents the principal organization speaking out on behalf of committed Jews and pro-Israeli forces.

The recent ZOA dinner attended by over 1,100 people reflects the growing influence of the organization.

The keynote speakers included potential Republican presidential candidate Senator Ted Cruz, who had recently made an enormous impact on the Jewish community. In a widely reported address to a Christian group, despite prior knowledge that the audience contained hundreds of Hezbollah supporters, Senator Cruz insisted that Israel is the only state in the Middle East that safeguards its Christian population. When the audience heckled him, the senator responded: “If you will not stand with Israel, I will not stand with you,” and stormed out of the meeting.

Indeed, due to the apparent paralysis and unwillingness of the Jewish establishment to speak up, the ZOA today represents the principal organization speaking out on behalf of committed Jews and pro-Israeli forces.

In his ZOA address, Cruz praised Klein, who suffers from Tourette Syndrome, describing him as a man with “the heart of the lion and the voice of Moses.” He bitterly condemned the Obama administration’s policy toward Israel and pledged “not only to reimpose sanctions on Iran, but strengthen them,” and insisted that unless Iran dismantled all 19,000 centrifuges and ceased promoting terrorism, “we do not have a deal.”

“He knows it is unbreakable because he’s been trying to break it the last five years,” he said. He also described Obama as “the most anti-Semitic president ever.”

Hagee’s controversial statements were strongly condemned by other Jewish groups, with Abe Foxman of the ADL describing his remarks as “offensive and misplaced.”

What provided significant political overtones to this dinner was the inclusion of Professor Alan Dershowitz as a keynote speaker. Dershowitz indisputably represents one of Israel’s staunchest and most articulate public supporters. Yet, he is a fully committed Democrat and until recently supported the president, insisting that he was a committed supporter of Israel.

In recent months Dershowitz appears to have become increasingly exasperated with Obama’s Israel policies. It would have been difficult, a year or so ago, to visualize him sharing a platform with Pastor Hagee, or even a right-wing Republican Senator Cruz. Yet, in his remarks Dershowitz referred to Cruz as his former student at the Harvard Law School and a friend.

He stated, “Israel must always remain a bipartisan issue… and we must explicitly express appreciation and admiration for those who stand up for the state of the Jewish people, even if we disagree with their other political, theological or social views.”

Dershowitz then stressed that “to be anti-Israeli is to be anti-American” and bitterly condemned “the moral equivalence which the president and Obama administration officials made between innocent Israeli victims of Hamas and Hamas terrorists killed in Israeli military strikes.”

Aside from Dershowitz, there are a number of other prominent Jews that could by no stretch of the imagination be described as “right wing” or extremist who have also displayed their exasperation with President Obama. For example, Michael Steinhardt, the mega-philanthropist and cofounder of Birthright who actually chaired the Democratic Leadership Council which propelled Bill Clinton to the presidency, hosted Senator Cruz at his investment firm’s office.

Ken Bialkin and Richard Stone, both former heads of the Conference of Presidents of Major Jewish Organizations, participated at the ZOA dinner. James Tisch, another former chairman of the President’s Conference, hosted Cruz at a lunch preceding the ZOA dinner, at which Mort Zuckerman, the owner of The New York Daily News and a strong Democrat backer, was also present.

Taken together, these elements suggest that there are major rumblings against the Obama administration within the Jewish community.

In this context, the ZOA can no longer be dismissed as a fringe or extremist group and is emerging as a genuine and vigorous component of the Jewish political mainstream. Indeed, due to the apparent paralysis and unwillingness of the Jewish establishment to speak up, the ZOA today represents the principal organization speaking out on behalf of committed Jews and pro-Israeli forces.

Mort Klein says “we are frequently called right-wing” but “the ZOA is not right-wing. We are simply right.”

The reality is that he reflects the right-wing nationalist sentiment of Israeli policy. His views tend to parallel the hardline right-wing elements of Likud and of Naftali Bennett’s Bayit Yehudi.

But this is somewhat irrelevant because the primary contribution of the ZOA is to project to Americans the case for Israel and condemn and expose the inappropriate policies adopted by the Obama administration, which seek to whitewash the PA and condemn Israel.

The remarkable growth in the liberal support for the ZOA over the past 12 months, combined with the public identification with it of some of the most prominent Jewish philanthropic and intellectual adherents to the Democratic Party, unquestionably suggests many American Jews traditionally supporting the Democrats are, at this late stage, reacting against the Obama administration’s shabby treatment of Israel and concerned with the lack of response of the official Jewish leadership.

This article was originally published by the Jerusalem Post and may be found here.

We would love to hear from you! Please fill out this form and we will get in touch with you shortly.
Trending Z
Uncategorized December 8, 2014
FLASH: ISRAEL-JORDAN PEACE TREATY (1994) GUARANTEES JEWS ACCESS TO THE TEMPLE MOUNT – LET MY PEOPLE PRAY
Uncategorized December 8, 2014
ZOA Analysis: Most American Rabbis Who Are Boycotting Some Israeli Ministers Are From Extremist Left Wing Groups (J Street; T’ruah; JVP)
Uncategorized December 8, 2014
Israel’s “Right of Return” Grandparent Clause is De-Judaizing the Jewish State – Eliminate It
Uncategorized December 8, 2014
Exclusive: ZOA Accuses Ilhan Omar of Hating the U.S. ‘as Much as Israel,’ Lauds Kevin McCarthy for ‘Throwing Her Off the HFAC’
Center for Law & Justice
We work to educate the American public and Congress about legal issues in order to advance the interests of Israel and the Jewish people.
We assist American victims of terrorism in vindicating their rights under the law, and seek to hold terrorists and sponsors of terrorism accountable for their actions.
We fight anti-Semitism and anti-Israel bias in the media and on college campuses.
We strive to enforce existing law and also to create new law in order to safeguard the rights of the Jewish people in the United States and Israel.
Our Mission
ZOA STATEMENT
The ZOA speaks out for Israel – in reports, newsletters, and other publications. In speeches in synagogues, churches, and community events, in high schools and colleges from coast to coast. In e-mail action alerts. In op-eds and letters to the editor. In radio and television appearances by ZOA leaders. Always on the front lines of pro-Israel activism, ZOA has made its mark.
Connect with us
Sign up for our Newsletter