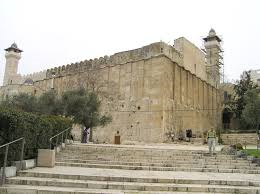 That’s what we heard coming off of the bus in the holy city of Hevron. We were afraid for the two were nearly indistinguishable.

Hevron is a precarious place. As home to one of the holiest sites in Judaism, the Cave of Machpelah, it houses the tombs of the matriarchs and patriarchs who are important to both Jews and Muslims alike. While we were in the Jewish half of Machpelah, I prayed at Leah’s tomb through a barred window. As I looked to the right, I noticed bulletproof glass. And through it I saw another barred window giving the Muslim side an outlet to pray to her too.

At times, it is difficult for me to understand why we are fighting. Aren’t we all just praying to the same people? The same God? Don’t we share much of the same history?

One could argue that the simple answer to these questions is “yes”. But the reality is more complicated.

While touring the city, we learned its history. Jews had been coming to Machpelah to pray for thousands of years. They were restricted at various times, but the drive to be here was ever present. Hevron fell into Christian hands, it fell into Muslim hands. But, never was there a time that Jews did not go there when they could.

In 1929, the Arab uprising began. The Jews of Hevron were being massacred by their neighbors, and the British did nothing to stop this attack. Of course they assumed that the problem was the Jews, and so they were evacuated. Again, Hevron was ethnically cleansed of Jews.

Until 1967 – when Miriam Levinger and other brave women came back to Hevron to reestablish a Jewish presence. They endured unbelievable conditions, little to no electricity, heat, food, and water. They persisted even though the Israeli government did not want them there. Their desire to live here was strong, they were allowed in the neighborhood of Kiryat Arba.

This story of perseverance is inspiring, but it is not without its woes. We heard from community leader, David Wilder, who told us of the murder of a baby girl named Shel Hevet in 1997. An Arab from the top of a hill shot her, and her death brought unbelievable sorrow to the Jewish community.

Rather than let this dampen their spirits, the people of Hevron, as it says in Torah, shook off their garments and rose up. I heard the laughter of children as they took to the playgrounds as I walked in the Avraham Avinu Synagogue that has stood in Hevron since the 16th century. I heard the story of its rebuilding in 1976.  I saw the Sephardic Torah that was saved from the Hevron massacre in 1929 and returned to its rightful place in the arc of the synagogue. I heard story after story of Jews coming back to this land. I felt the intense need to be here.

I remember preparing for my Bat Mitzvah. My Torah portion was Chaye Sara, a beautiful, meaningful piece of Torah whose lessons I have used throughout my growth as a young Jewish person. Every year when Chaye Sara approaches, Jews make a pilgrimage to Hevron to celebrate it. In that parasha we, the Jewish people, were given Machpelah as the burial site for our forbearers–Sara and after her, Abraham and Isaac, Jacob and Leah, Rachel and Rebekah. The history exists with evidence that this land was given to the Jews justly and fairly.

Every day, rocks are thrown at Kiryat Arba. On Fridays, Muslims leave the attached mosque to Machpelah and riot. Jews are screamed at, pushed, and harassed to leave. But we will not.

For we trust, and we are not afraid.

We would love to hear from you! Please fill out this form and we will get in touch with you shortly.
Trending Z
News December 30, 2014
ZOA Condemns U.S. State Dept. & U.S. Amb. Nides For Siding with Antisemitic, Discriminatory Palestinian & Hamas Terrorists re: the Temple Mount, Violating Jews’ Religious Freedom
News December 30, 2014
ZOA’s Klein JPost Op-Ed: There is Nothing Extreme About Israel’s New Government
Uncategorized December 30, 2014
FLASH: ISRAEL-JORDAN PEACE TREATY (1994) GUARANTEES JEWS ACCESS TO THE TEMPLE MOUNT – LET MY PEOPLE PRAY
Uncategorized December 30, 2014
ZOA Analysis: Most American Rabbis Who Are Boycotting Some Israeli Ministers Are From Extremist Left Wing Groups (J Street; T’ruah; JVP)
Center for Law & Justice
We work to educate the American public and Congress about legal issues in order to advance the interests of Israel and the Jewish people.
We assist American victims of terrorism in vindicating their rights under the law, and seek to hold terrorists and sponsors of terrorism accountable for their actions.
We fight anti-Semitism and anti-Israel bias in the media and on college campuses.
We strive to enforce existing law and also to create new law in order to safeguard the rights of the Jewish people in the United States and Israel.
Our Mission
ZOA STATEMENT
The ZOA speaks out for Israel – in reports, newsletters, and other publications. In speeches in synagogues, churches, and community events, in high schools and colleges from coast to coast. In e-mail action alerts. In op-eds and letters to the editor. In radio and television appearances by ZOA leaders. Always on the front lines of pro-Israel activism, ZOA has made its mark.
Connect with us
Sign up for our Newsletter