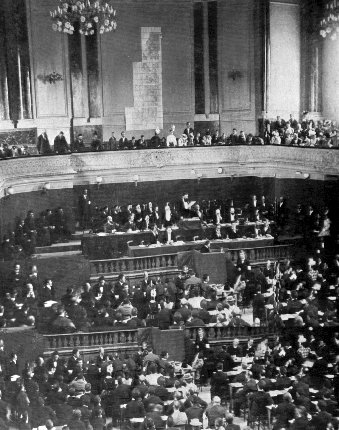 The Zionist Organization of America (ZOA) filed a complaint with the World Zionist Congress that calls for the disqualification of a slate of progressive groups from the Congress’s upcoming election over those groups’ support of sanctions and boycotts against Israel.

ZOA objected to the eligibility of Ameinu and Partners for a Progressive Israel (PPI), groups that are part of the election’s “HaTikvah slate,” which is named after Israel’s national anthem.

Ameinu “lobbies for international sanctions against Israeli leaders whose political positions they disagree with” and PPI “promotes boycotts against Israeli Jewish businesses in Judea and Samaria and eastern Jerusalem.”

Ameinu “lobbies for international sanctions against Israeli leaders whose political positions they disagree with” and PPI “promotes boycotts against Israeli Jewish businesses in Judea and Samaria and eastern Jerusalem,” ZOA said.

“For the World Zionist Congress to allow groups to run who demonize Israel, promote placing international sanctions on political leaders they disagree with, and harm Israel and its people (both Jewish and Arab) economically through promoting boycotts, is an affront to the very meaning of Zionism, and does severe harm to Israel,” ZOA President Morton A. Klein said in a statement.

The HaTikvah slate is “misleadingly” named, ZOA said, because voters assuming the slate “shares the same nationalist sentiments” as the Israeli national anthem may be “misled into voting for a slate that in fact promotes boycotts against Jewish businesses in eastern Jerusalem and other areas encompassed by the song.”

The election for the 37th World Zionist Congress, which has met regularly since its inception in 1897, will begin Jan. 13 and last through April 30, 2015. The Congress is set to convene next October.

This article was originally published by JNS.org and may be found here.

We would love to hear from you! Please fill out this form and we will get in touch with you shortly.
Trending Z
Uncategorized January 5, 2015
FLASH: ISRAEL-JORDAN PEACE TREATY (1994) GUARANTEES JEWS ACCESS TO THE TEMPLE MOUNT – LET MY PEOPLE PRAY
Uncategorized January 5, 2015
ZOA Analysis: Most American Rabbis Who Are Boycotting Some Israeli Ministers Are From Extremist Left Wing Groups (J Street; T’ruah; JVP)
Uncategorized January 5, 2015
Israel’s “Right of Return” Grandparent Clause is De-Judaizing the Jewish State – Eliminate It
Uncategorized January 5, 2015
Exclusive: ZOA Accuses Ilhan Omar of Hating the U.S. ‘as Much as Israel,’ Lauds Kevin McCarthy for ‘Throwing Her Off the HFAC’
Center for Law & Justice
We work to educate the American public and Congress about legal issues in order to advance the interests of Israel and the Jewish people.
We assist American victims of terrorism in vindicating their rights under the law, and seek to hold terrorists and sponsors of terrorism accountable for their actions.
We fight anti-Semitism and anti-Israel bias in the media and on college campuses.
We strive to enforce existing law and also to create new law in order to safeguard the rights of the Jewish people in the United States and Israel.
Our Mission
ZOA STATEMENT
The ZOA speaks out for Israel – in reports, newsletters, and other publications. In speeches in synagogues, churches, and community events, in high schools and colleges from coast to coast. In e-mail action alerts. In op-eds and letters to the editor. In radio and television appearances by ZOA leaders. Always on the front lines of pro-Israel activism, ZOA has made its mark.
Connect with us
Sign up for our Newsletter