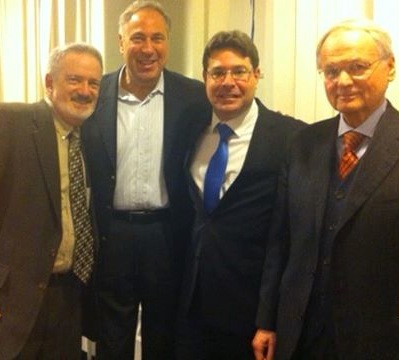 Knesset liaison to Prime Minister Netanyahu Akounis addressed a number of issues, including the extreme danger of a Palestinian state led by the currently hostile PA, recently evidenced by its incitement to violence in Jerusalem.

Knesset liaison to Prime Minister Netanyahu Akounis addressed a number of issues, including the extreme danger of a Palestinian state led by the currently hostile PA, recently evidenced by its incitement to violence in Jerusalem.

Those present (e.g., ZOA National President Mort Klein and Vice-Chair Dr. Alan Mazurek, pictured with Akounis in between), and on the concurrent conference call, were pleased to hear strong positions evinced by an up-and-coming Israeli leader.

Two regional ZOA programs bracketed our Washington week: In Philly, we described our activities aimed at improving Israel’s control and sovereignty in eastern Jerusalem, especially on the historic Mount of Olives, and our plans to pursue the problem from a U.S. government angle. In New Jersey, our Legal Grounds Knesset campaign, and corollary efforts to counter the State Department’s Trans-Green Line Boycott (aka TGLB), was the main theme.

Face time with honoree Senator Ted Cruz (R-TX), amid ZOA’s elbow-to-elbow dinner crowd and a slew of other meeting opportunities, turned out to be particularly helpful — setting us up for an extended and thoughtful conversation in his D.C. office the following week.

It was our privilege, having been asked by MK Nissim Ze’ev, to host Col. Moneeb Bader at the dinner. Bader is a decorated Druze IDF commander and leader of the Druze IDF Vets Association. Poignantly, this was just after two Druze police officers had sacrificed their lives while protecting Jews in Jerusalem.

We had a chance to reconnect or get acquainted with additional key players at the Beit El dinner as well, including our warm friend and dinner honoree Gov. Mike Huckabee. (Read more about our highly productive week in Israel with Huckabee, post-Gaza war, in our Media Activities report.)

Our Jerusalem-Washington conversation continues — at the State Department

Northern New Jersey ZOA director Laura Fein joined us for the first portion of our back-to-back Washington meetings — back and forth between Capitol Hill and Foggy Bottom, returning to Daube’s usual haunts with some additions. We kicked off with a visit to the State Department, granted after ZOA ISRAEL had sent a letter to Dr. Sarah Sewall, the Under Secretary of the Bureau of Civilian Security, Democracy and Civil Rights.

A process begun when Daube had approached the State Department’s representative in Jerusalem (Consul General Michael Ratney’s briefing on the Mount of Olives pictured below and described here), we apprised officials, including Sewall’s Deputy Assistant Secretary Steven Feldstein, and Special Envoy for Monitoring and Combating Anti-Semitism Ira Forman, about eastern Jerusalem conditions.

We would love to hear from you! Please fill out this form and we will get in touch with you shortly.
Trending Z
Uncategorized January 12, 2015
FLASH: ISRAEL-JORDAN PEACE TREATY (1994) GUARANTEES JEWS ACCESS TO THE TEMPLE MOUNT – LET MY PEOPLE PRAY
Uncategorized January 12, 2015
ZOA Analysis: Most American Rabbis Who Are Boycotting Some Israeli Ministers Are From Extremist Left Wing Groups (J Street; T’ruah; JVP)
Uncategorized January 12, 2015
Israel’s “Right of Return” Grandparent Clause is De-Judaizing the Jewish State – Eliminate It
Uncategorized January 12, 2015
Exclusive: ZOA Accuses Ilhan Omar of Hating the U.S. ‘as Much as Israel,’ Lauds Kevin McCarthy for ‘Throwing Her Off the HFAC’
Center for Law & Justice
We work to educate the American public and Congress about legal issues in order to advance the interests of Israel and the Jewish people.
We assist American victims of terrorism in vindicating their rights under the law, and seek to hold terrorists and sponsors of terrorism accountable for their actions.
We fight anti-Semitism and anti-Israel bias in the media and on college campuses.
We strive to enforce existing law and also to create new law in order to safeguard the rights of the Jewish people in the United States and Israel.
Our Mission
ZOA STATEMENT
The ZOA speaks out for Israel – in reports, newsletters, and other publications. In speeches in synagogues, churches, and community events, in high schools and colleges from coast to coast. In e-mail action alerts. In op-eds and letters to the editor. In radio and television appearances by ZOA leaders. Always on the front lines of pro-Israel activism, ZOA has made its mark.
Connect with us
Sign up for our Newsletter