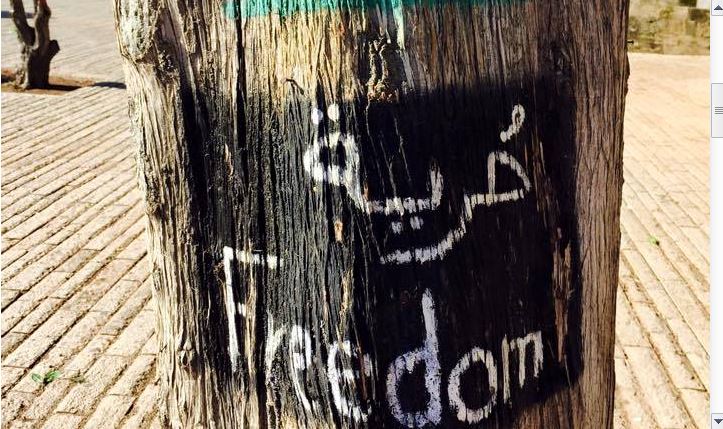 I am frustrated and upset. I am disgusted and taken aback. And it is Christmas.

The moment we drove into Nazareth, the moment I looked out of the window of our bus, I knew we were in a city of co-existence. Everywhere I looked: Arabic signs with Hebrew directly next to it, both above English in order to assist tourists on religious Pilgrimages to holy sites feel more comfortable. But, the moment I stepped off the bus, everything changed.

The first thing I saw when I stepped off the bus was a tree, nature’s gift to human life. But this tree was no ordinary tree; it had been desecrated by a radical ideology pervasive within the Middle East. On the tree, below the symbol of Palestinian nationalism, below the flag of the former Palestinian Liberation Organization (PLO) lay a black flag with white writing in Arabic proclaiming freedom.

I have no answers to these questions, but walking through Nazareth, I am left only in heartbreak.

Walking down the street, across from a line of graffiti proclaiming: Free Gaza, Arafat the Hero, and Resist (in Arabic) lay a swastika, Magen David, and the never ambiguous date, 1948. I had assumed that directly comparing the foundation of Israel, the homeland of the Jewish people, to the Nazi regime that attempted to wipe it out was a belief held only by a small population of radicals. Yet, as I walked down the street, seeing signs directed at Christians and Jews, proclaiming that only conversion to Islam will save their soul from the hellfire, my worldview has become shattered.

I am left only with more questions.

I am lost because I don’t understand. I have never been at such a loss for words. I will never lose my fervor in defending the compassionate Muslims that I have come to know as mainstream, but I can never again live in peaceful bliss that an ideology of hate has not become widespread.

I am lost, but hopefully someday, we can be found together again, in coexistence.

We would love to hear from you! Please fill out this form and we will get in touch with you shortly.
Trending Z
News January 6, 2015
ZOA Condemns U.S. State Dept. & U.S. Amb. Nides For Siding with Antisemitic, Discriminatory Palestinian & Hamas Terrorists re: the Temple Mount, Violating Jews’ Religious Freedom
News January 6, 2015
ZOA’s Klein JPost Op-Ed: There is Nothing Extreme About Israel’s New Government
Uncategorized January 6, 2015
FLASH: ISRAEL-JORDAN PEACE TREATY (1994) GUARANTEES JEWS ACCESS TO THE TEMPLE MOUNT – LET MY PEOPLE PRAY
Uncategorized January 6, 2015
ZOA Analysis: Most American Rabbis Who Are Boycotting Some Israeli Ministers Are From Extremist Left Wing Groups (J Street; T’ruah; JVP)
Center for Law & Justice
We work to educate the American public and Congress about legal issues in order to advance the interests of Israel and the Jewish people.
We assist American victims of terrorism in vindicating their rights under the law, and seek to hold terrorists and sponsors of terrorism accountable for their actions.
We fight anti-Semitism and anti-Israel bias in the media and on college campuses.
We strive to enforce existing law and also to create new law in order to safeguard the rights of the Jewish people in the United States and Israel.
Our Mission
ZOA STATEMENT
The ZOA speaks out for Israel – in reports, newsletters, and other publications. In speeches in synagogues, churches, and community events, in high schools and colleges from coast to coast. In e-mail action alerts. In op-eds and letters to the editor. In radio and television appearances by ZOA leaders. Always on the front lines of pro-Israel activism, ZOA has made its mark.
Connect with us
Sign up for our Newsletter