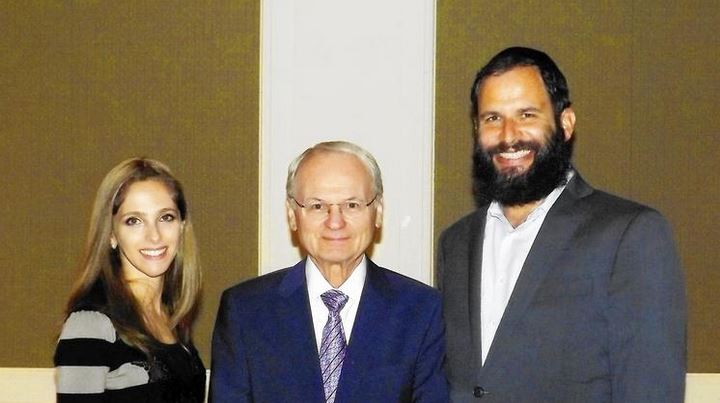 Though he came to Palm Beach Synagogue to address, “Orwellian Lies about Israel,” the recent massacre of Jewish hostages in an east Paris kosher market became the leading topic of Zionist Organization of America National President Mort Klein’s Jan. 13 discussion.

“If the only people murdered in that terrorist attack were Jews, the world wouldn’t have paid attention,” Klein said of the two-day killing spree in Paris by Islamist terrorists that claimed 17 victims. “Jews are being attacked all the time in France.”

Klein said, “We have to deal with Islamic terrorism in America,” and noted that ZOA is lobbying Congress to cut off foreign aid to countries that “are protecting terrorists.”

“I call them Orwellian Lies because Orwell spoke of a time when people will think wrong is right and right is wrong — a time of universal deceit, when telling the truth will be a revolutionary act.”

“They try to shut you up by calling you an Islamaphobe, or racist, but I don’t hate anyone,” he said. “I’m just telling the truth.”

Klein also noted that many French Jews are leaving the country to relocate in Israel because of “anti-Semitism” in France.

“I told my friends in France that they should consider making aliyah to Israel,” he said. “People are also worried.”

Klein then went on to discuss what he described as the “Orwellian Lies about Israel,” concerning, “the lie about Jerusalem being holy to Muslims,” and, “the lie about the so-called occupation.”

“I call them Orwellian Lies because Orwell spoke of a time when people will think wrong is right and right is wrong — a time of universal deceit, when telling the truth will be a revolutionary act.”

Nadine Richterman, Florida regional director of CAMERA (Committee for Accuracy in Middle East Reporting in America), said she was “impressed” by Klein’s words, and his “passion.”

“As I listened to his presentation at the Palm Beach Synagogue, I knew this man speaks the truth as few others do,” she said.

Richterman noted that “in order to know the truth about Israel,” people need to know the history of the Arab war against Israel.

“Mort discussed that history, specifically the history of the Palestinian mandate and the so-called ‘Palestinian people,” she said. “He spoke of the ‘forgotten’ refugees, the almost one million Jews who were forced to leave their homes in Arab countries in 1948, and contrasted the way these refugees were integrated into Israeli society as opposed to the so-called Palestinian refugees who were put into squalid refugee camps.”

“Mort Klein is a brave advocate for Israel. He speaks the truth and is not afraid to call it what it is,” he said. “Everyone talks about the ‘Israel-Palestine conflict.’ There is no Israel-Palestine Conflict. There is a war against Israel. Israel wants peace. There’s no two-state solution. Israel has always been a state. What they want is a terrorist state alongside Israel.”

“Unfortunately, you’re going to see more immigration to Israel,” he said. “The future does not look good for Jews in Europe. The Muslim population is growing and France is afraid to stand up to them.”

“It would be nice to see France fight back,” he noted,” but up to now, they haven’t been fighting back against Islamic terrorism.”

This article was originally published by the Sun-Sentinel and may be found here.

We would love to hear from you! Please fill out this form and we will get in touch with you shortly.
Trending Z
News January 20, 2015
ZOA Condemns U.S. State Dept. & U.S. Amb. Nides For Siding with Antisemitic, Discriminatory Palestinian & Hamas Terrorists re: the Temple Mount, Violating Jews’ Religious Freedom
Uncategorized January 20, 2015
FLASH: ISRAEL-JORDAN PEACE TREATY (1994) GUARANTEES JEWS ACCESS TO THE TEMPLE MOUNT – LET MY PEOPLE PRAY
Uncategorized January 20, 2015
ZOA Analysis: Most American Rabbis Who Are Boycotting Some Israeli Ministers Are From Extremist Left Wing Groups (J Street; T’ruah; JVP)
Uncategorized January 20, 2015
Israel’s “Right of Return” Grandparent Clause is De-Judaizing the Jewish State – Eliminate It
Center for Law & Justice
We work to educate the American public and Congress about legal issues in order to advance the interests of Israel and the Jewish people.
We assist American victims of terrorism in vindicating their rights under the law, and seek to hold terrorists and sponsors of terrorism accountable for their actions.
We fight anti-Semitism and anti-Israel bias in the media and on college campuses.
We strive to enforce existing law and also to create new law in order to safeguard the rights of the Jewish people in the United States and Israel.
Our Mission
ZOA STATEMENT
The ZOA speaks out for Israel – in reports, newsletters, and other publications. In speeches in synagogues, churches, and community events, in high schools and colleges from coast to coast. In e-mail action alerts. In op-eds and letters to the editor. In radio and television appearances by ZOA leaders. Always on the front lines of pro-Israel activism, ZOA has made its mark.
Related Articles
OP-ED BY: Nathan Guttman Forward Article Quotes ZOA’s Mort Klein Remarks at D.C. Pro-Israel Rally