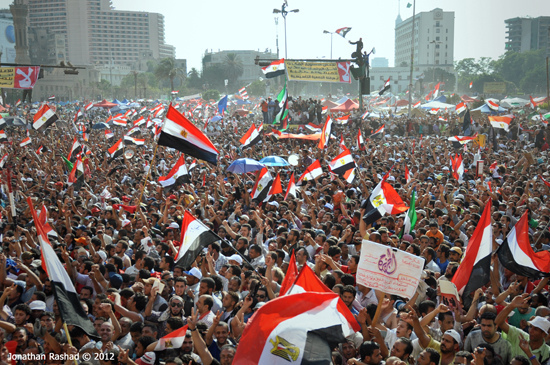 The State Department hosted a delegation of Muslim Brotherhood-aligned leaders this week for a meeting about their ongoing efforts to oppose the current government of President Abdel Fattah al-Sisi of Egypt, who rose to power following the overthrow of Mohamed Morsi, an ally of the Brotherhood, in 2013.

One member of the delegation, a Brotherhood-aligned judge in Egypt, posed for a picture while at Foggy Bottom in which he held up the Islamic group’s notorious four-finger Rabia symbol, according to his Facebook page.

That delegation member, Waleed Sharaby, is a secretary-general of the Egyptian Revolutionary Council and a spokesman for Judges for Egypt, a group reported to have close ties to the Brotherhood.

“The delegation’s composition includes several non-official Muslim Brotherhood members to portray an image of a united Islamist and non-Islamist revolutionary camp against the regime.”

The delegation also includes Gamal Heshmat, a leading member of the Brotherhood, and Abdel Mawgoud al-Dardery, a Brotherhood member who served as a parliamentarian from Luxor.

Sharaby, the Brotherhood-aligned judge, flashed the Islamist group’s popular symbol in his picture at the State Department and wrote in a caption: “Now in the U.S. State Department. Your steadfastness impresses everyone,” according to an independent translation of the Arabic.

Another member of the delegation, Maha Azzam, confirmed during an event hosted Tuesday by the Center for the Study of Islam and Democracy (CSID)—another group accused of having close ties to the Brotherhood—that the delegation had “fruitful” talks with the State Department.

Assam also said that the department expressed openness to engagement, according to one person who attended the event.

Trager, a fellow at the Washington Institute for Near East Policy (WINEP), told the Washington Free Beacon that the State Department is interested in maintaining a dialogue with the Brotherhood due to its continued role in the Egyptian political scene.

When asked to comment on the meeting Tuesday evening, a State Department official said, “We meet with representatives from across the political spectrum in Egypt.”

The official declined to elaborate on who may have been hosted or on any details about the timing and substance of any talks.

Samuel Tadros, an Egypt expert and research fellow at the Hudson Institute who is familiar with the delegation, said that the visit is meant to rally support for the Muslim Brotherhood’s ongoing efforts against to oppose Sisi.

“Secondly, reaching out to administration and the policy community in D.C.,” Tadros said. “The delegation’s composition includes several non-official Muslim Brotherhood members to portray an image of a united Islamist and non-Islamist revolutionary camp against the regime.”

The delegation held several public events this week in Maryland and Virginia, according to invitations that were sent out.

Patrick Poole, a terrorism expert and national security reporter, said the powwow at the State Department could be a sign that the Obama administration still considers the Brotherhood politically viable, despite its ouster from power and a subsequent crackdown on its members by Egyptian authorities.

“What this shows is that the widespread rejection of the Muslim Brotherhood across the Middle East, particularly the largest protests in recorded human history in Egypt on June 30, 2013, that led to Morsi’s ouster, is not recognized by the State Department and the Obama administration,” Poole said.

“This is a direct insult to our Egyptian allies, who are in an existential struggle against the Muslim Brotherhood, all in the pursuit of the mythical ‘moderate Islamists’ who the D.C. foreign policy elite still believe will bring democracy to the Middle East,” Poole said.

This article was originally published by the Free Beacon and may be found here.

We would love to hear from you! Please fill out this form and we will get in touch with you shortly.
Trending Z
Uncategorized January 28, 2015
FLASH: ISRAEL-JORDAN PEACE TREATY (1994) GUARANTEES JEWS ACCESS TO THE TEMPLE MOUNT – LET MY PEOPLE PRAY
Uncategorized January 28, 2015
ZOA Analysis: Most American Rabbis Who Are Boycotting Some Israeli Ministers Are From Extremist Left Wing Groups (J Street; T’ruah; JVP)
Uncategorized January 28, 2015
Israel’s “Right of Return” Grandparent Clause is De-Judaizing the Jewish State – Eliminate It
Uncategorized January 28, 2015
Exclusive: ZOA Accuses Ilhan Omar of Hating the U.S. ‘as Much as Israel,’ Lauds Kevin McCarthy for ‘Throwing Her Off the HFAC’
Center for Law & Justice
We work to educate the American public and Congress about legal issues in order to advance the interests of Israel and the Jewish people.
We assist American victims of terrorism in vindicating their rights under the law, and seek to hold terrorists and sponsors of terrorism accountable for their actions.
We fight anti-Semitism and anti-Israel bias in the media and on college campuses.
We strive to enforce existing law and also to create new law in order to safeguard the rights of the Jewish people in the United States and Israel.
Our Mission
ZOA STATEMENT
The ZOA speaks out for Israel – in reports, newsletters, and other publications. In speeches in synagogues, churches, and community events, in high schools and colleges from coast to coast. In e-mail action alerts. In op-eds and letters to the editor. In radio and television appearances by ZOA leaders. Always on the front lines of pro-Israel activism, ZOA has made its mark.
Connect with us
Sign up for our Newsletter