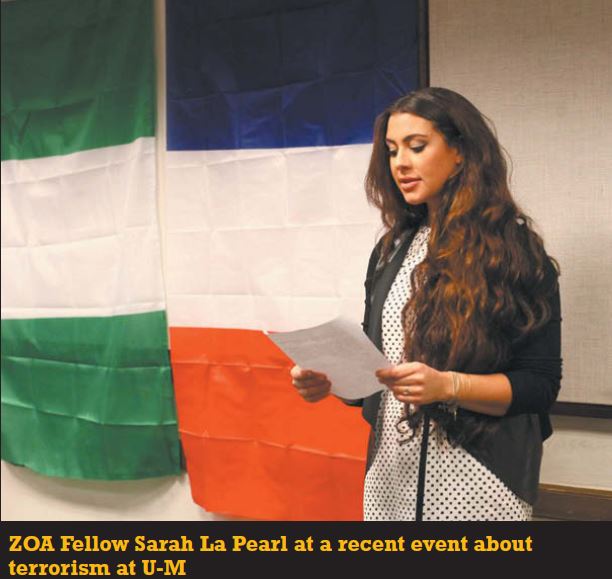 I returned to Israel for my 2014 summer internship at the Jerusalem Post just before Operation Protective Edge began. I was unaware that the early morning air raid sirens blasting through Tel Aviv would wake me up, both literally and figuratively, to the fact that a Jewish state is paramount to Jewish survival. I felt compelled to actively support the enduring existence of Israel and the Jewish people after experiencing an alarm that I could not ignore. Unfortunately, this is the daily reality for many Israeli citizens. I returned to the United States on a mission with meaning and purpose. After diligent research, it became obvious that the Zionist Organization of America exemplified my objectives, so I reached out to them. The organization enabled me to return to Israel on an educational advocacy trip. This leadership mission taught me how to organize and advocate for the ZOA at the University of Michigan in Ann Arbor. It did not take long to become aware that the ZOA is essential to promoting the interest of Israel on my campus. Higher education institutions have been plagued with a variety of relative views about the State of Israel. Those views are promoted through individuals, groups and institutions. I am honored to represent, introduce and implement the ZOA’s solid support for Israel on my campus.

On Jan. 28, the ZOA hosted its first event at U-M. It was designed as a candlelight memorial for worldwide victims of terror, specifically those targeted in the recent attacks in France and Nigeria. Several speakers, such as Pandit Mami, ZOA’s campus coordinator, provided a diverse audience with personal insight about the global efforts of radical Islamic terrorism. Other speakers at the event, such as Sean Martin, ZOA’s young adult coordinator, advanced the idea that the horrific impacts of terrorism affect many nations and are not exclusive to the State of Israel. ZOA Michigan Director Kobi Erez spoke about anti-Semitism. Their approach generated a broader understanding about terrorism that indirectly induced a greater understanding about Israel. Overall, the event successfully promoted the interest of Israel on campus due to the speakers’ all-inclusive focus. Efforts to gain support for the Jewish homeland should be generated from a perspective that it has a paramount relationship to humanity as a whole. Most college students do not want history lessons during their free time. They want to be young and connect to the world around them through authentic interactive relationships. They want to be inspired, rather than convinced or coerced. They want complexities that are simplified.

As a student leader and ZOA fellow on campus, I plan to organize many more thought-provoking and interactive events on topics that promote the interest of Israel.
Sarah La Pearl of White Lake is a junior at the University of Michigan in Ann Arbor.

We would love to hear from you! Please fill out this form and we will get in touch with you shortly.
Trending Z
Uncategorized March 2, 2015
FLASH: ISRAEL-JORDAN PEACE TREATY (1994) GUARANTEES JEWS ACCESS TO THE TEMPLE MOUNT – LET MY PEOPLE PRAY
Uncategorized March 2, 2015
ZOA Analysis: Most American Rabbis Who Are Boycotting Some Israeli Ministers Are From Extremist Left Wing Groups (J Street; T’ruah; JVP)
Uncategorized March 2, 2015
Israel’s “Right of Return” Grandparent Clause is De-Judaizing the Jewish State – Eliminate It
Uncategorized March 2, 2015
Exclusive: ZOA Accuses Ilhan Omar of Hating the U.S. ‘as Much as Israel,’ Lauds Kevin McCarthy for ‘Throwing Her Off the HFAC’
Center for Law & Justice
We work to educate the American public and Congress about legal issues in order to advance the interests of Israel and the Jewish people.
We assist American victims of terrorism in vindicating their rights under the law, and seek to hold terrorists and sponsors of terrorism accountable for their actions.
We fight anti-Semitism and anti-Israel bias in the media and on college campuses.
We strive to enforce existing law and also to create new law in order to safeguard the rights of the Jewish people in the United States and Israel.
Our Mission
ZOA STATEMENT
The ZOA speaks out for Israel – in reports, newsletters, and other publications. In speeches in synagogues, churches, and community events, in high schools and colleges from coast to coast. In e-mail action alerts. In op-eds and letters to the editor. In radio and television appearances by ZOA leaders. Always on the front lines of pro-Israel activism, ZOA has made its mark.
Connect with us
Sign up for our Newsletter