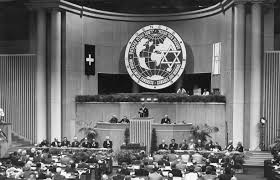 On March 12, 2015, the Zionist Organization of America (ZOA) argued an important case at the Zionist Supreme Court in Jerusalem, to disqualify groups that promote boycotts, sanctions and/or divestment against Israel (“BDS”) from running in the ongoing 2015 World Zionist Congress election.  BDS discriminates against Jews and Israelis.  The ZOA therefore argued that organizations that promote BDS violate the anti-discrimination requirements of the World Zionist Organization.  In addition, ZOA demonstrated that BDS violates New York State law and Jewish law.

During the Zionist Supreme Court hearing, the “Hatikvah” slate, whose constituent members support BDS, tried to justify its discriminatory, economically damaging boycotts against Jewish and Israeli businesses by claiming that such boycotts promote “peace and justice.”

During the Zionist Supreme Court hearing, the “Hatikvah” slate, whose constituent members support BDS, tried to justify its discriminatory, economically damaging boycotts against Jewish and Israeli businesses by claiming that such boycotts promote “peace and justice.”  In addition, the Hatikvah slate argued – without any basis – that the court should simply ignore several of the BDS groups that were part of the Hatikvah slate.  The Hatikvah slate also attempted to distract attention from the fact that its discriminatory anti-Israel, anti-Jewish boycotts violate the WZO Constitution, by maligning ZOA’s motives for bringing the case.

The ZOA pointed out that BDS is unconscionable bigotry and discrimination against Jews, and in fact harms peaceful co-existence; and emphasized that the Zionist Supreme Court’s mandate is to enforce the WZO Constitution’s anti-discrimination requirements.

The “Hatikvah” slate’s constituent organizations promote BDS as follows: (1) Partners for Progressive Israel (PPI) openly (including right on its website) promotes boycotts against Jewish and Israeli-owned business that have any facility over the “green line” (the indefensible 1949 Armistice lines); (2) Americans for Peace now does the same as PPI; (3) Ameinu, through its The Third Narrative subsidiary, promotes severe international sanctions, including travel restrictions and financial penalties, against Israeli officials whom it disagrees with; (4) New Israel Fund (“NIF”) funds BDS groups and funded the BDS infrastructure; (5) J Street promotes, honors and features and brings leading BDS speakers to conferences and college campuses; and (6) “Open Hillel” (which works together with the anti-Israel hate group Students for Justice in Palestine-SJP), works to force campus Hillel facilities to host BDS speakers  who call for Israel’s destruction and BDS events.   The Hatikvah slate groups are interconnected; they share offices, directors, and referrals to each other’s websites, etc.

Copies of ZOA’s detailed opening appeals brief and reply brief can be found here and here.

ZOA is waiting for the Court’s decision.

Meanwhile, if you have not yet voted in the World Zionist Congress elections, it is extremely important to vote for the Zionist Organization of America/ZOA: Defend Jews & Israeli Rights slate.  You can vote online at the voting link at VoteZOA.org.  For assistance, contact liz@zoa.org.  With your help and votes, the ZOA slate will continue our fight against BDS at the full World Zionist Congress.

The World Zionist Congress determines funding, leadership and policy priorities for major Jewish communal organizations including the Jewish Agency, the Jewish National Fund, the WZO, and Keren Hayesod.   Many millions of dollars and critical policies are at stake.  The Zionist Organization of America ZOA: Defend Jews and Israel’s Rights slate prioritizes rescuing Jews endangered by anti-Semitism; helping Jewish students and fighting anti-Semitism on college campuses around the world; assisting Israel and defending Israel’s rights; defending undivided Jerusalem; opposing a Fatah-Hamas terrorist state and opposing sending U.S. tax dollars to that regime; combating BDS; exposing the truth about the Arab war against Israel and the Palestinian Authority’s incitement to violence against Jews in mosques, media and speeches; promoting Zionist and Jewish education; and supporting freeing Jonathan Pollard.

We would love to hear from you! Please fill out this form and we will get in touch with you shortly.
Trending Z
Uncategorized March 25, 2015
FLASH: ISRAEL-JORDAN PEACE TREATY (1994) GUARANTEES JEWS ACCESS TO THE TEMPLE MOUNT – LET MY PEOPLE PRAY
Uncategorized March 25, 2015
ZOA Analysis: Most American Rabbis Who Are Boycotting Some Israeli Ministers Are From Extremist Left Wing Groups (J Street; T’ruah; JVP)
Uncategorized March 25, 2015
Israel’s “Right of Return” Grandparent Clause is De-Judaizing the Jewish State – Eliminate It
Uncategorized March 25, 2015
Exclusive: ZOA Accuses Ilhan Omar of Hating the U.S. ‘as Much as Israel,’ Lauds Kevin McCarthy for ‘Throwing Her Off the HFAC’
Center for Law & Justice
We work to educate the American public and Congress about legal issues in order to advance the interests of Israel and the Jewish people.
We assist American victims of terrorism in vindicating their rights under the law, and seek to hold terrorists and sponsors of terrorism accountable for their actions.
We fight anti-Semitism and anti-Israel bias in the media and on college campuses.
We strive to enforce existing law and also to create new law in order to safeguard the rights of the Jewish people in the United States and Israel.
Our Mission
ZOA STATEMENT
The ZOA speaks out for Israel – in reports, newsletters, and other publications. In speeches in synagogues, churches, and community events, in high schools and colleges from coast to coast. In e-mail action alerts. In op-eds and letters to the editor. In radio and television appearances by ZOA leaders. Always on the front lines of pro-Israel activism, ZOA has made its mark.
Related Articles
OP-ED ZOA Mourns Passing of Ariel Founder & Visionary, Ron Nachman