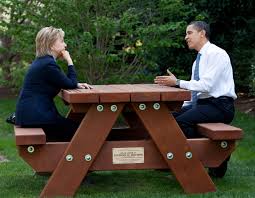 “The power of accurate observation is commonly called cynicism by those who have not got it.”  –  George Bernard Shaw

Hillary Clinton’s reception was mobbed.  As I’ll relate shortly, I had personally encountered Senator Clinton before, at a revealing “behind the scenes” meeting.   Instead of waiting on line to see her again, I attended the three other contenders’ gatherings.

Israel’s willingness to trust, and give up concrete rights in exchange for intangible promises is also exemplified by the various agreements which Israel entered into with the Palestinian Authority since 1993 (Oslo I, Oslo II, the Wye River Memorandum, the Hebron Accord, etc.).

At Senator Brownback’s reception, Brownback spoke about his heartfelt religious convictions, which had moved him to become one of Israel’s staunchest supporters in the Senate.  He understood Israel’s struggle for survival against constant Arab attack, and sincerely cared about Israel’s defense.

Senator Biden’s gathering was odd and somewhat chaotic.  Biden flashed his trademark Hollywood smile and wandered around the room.  Those in attendance followed him as he moved about, straining to hear what he had to say.  Nothing particularly memorable emerged during the time I spent at his event.

By contrast, in the next room, Senator Obama’s statements were very memorable – at least to anyone who was listening carefully.   I stood a few feet away from our future president as he addressed a small crowd of about three or four dozen mostly star-struck, impressionable young Jews.  Obama stated – and repeated – the following breathtakingly naïve, dangerous, morally equivalent view about the root of Israel’s difficulties:

“The biggest enemy that I think we have in this whole process is . . . cynicism – the belief that the world as it is can’t be changed, that we are consigned to an endless cycle of violence and strife and bitterness.”[i]

“Cynicism” is the “biggest enemy”?   I was appalled.  Iran was threatening nuclear annihilation of Israel, the American fleet, and other American interests and allies, and Obama thought all would be well if we just stopped being so “cynical”?!   In addition to the Iranian threat, the “biggest enemy” to peace in the Middle East has been, and continues to be the unrelenting Arab “Palestinian” determination to destroy Israel through all available means, including terrorism, delegitimization, suicide bombings, non-stop rocket attacks, kidnappings, torture, and the continuous preaching of hatred for Jews, Americans and Israel in Palestinian schools, textbooks, and media.

Obama’s portrayal of Jews and Israelis as “cynical” was also way off the mark.  If anything, Israelis and liberal American Jews tend to be too trusting, too ready to give up what is rightfully Israel’s and what will protect Israeli lives, for the mere hope that still another concession will bring peace.  Convicted Arab terrorists are released from Israeli jails with promises that they will kill no more, and then they turn around and murder even larger numbers of Jews.  Israelis gave the Palestinians in Gaza their homes, greenhouses and an entire infrastructure for a prosperous society in the hope that that this would bring peace, and were repaid with stepped up, unrelenting rocket attacks on Israeli children, kindergartens, schools, synagogues, hospitals and homes in Sderot and other Israeli towns and cities.  If only Israel was more cynical, years of such attacks would not have occurred.

Israel’s willingness to trust, and give up concrete rights in exchange for intangible promises is also exemplified by the various agreements which Israel entered into with the Palestinian Authority since 1993 (Oslo I, Oslo II, the Wye River Memorandum, the Hebron Accord, etc.).  Israel ceded control to most of the West Bank to the Palestinian Authority – in return for Palestinian promises to stop inciting terrorism, collect illegal weapons, and change constitutions which call for Israel’s destruction.  To this day, the Fatah (and Hamas) constitutions still call for Israel’s destruction, and the Palestinians Authority still names schools, soccer teams and public squares after murderers of Israeli children.  Unrepentant Arab terrorists are held up as examples for all to follow.  The Palestinian Authority still refuses to collect illegal weapons, still sentences to death anyone who sells or rents land to a Jewish person, and still preaches hatred in every forum.  Palestinian Authority President Mahmoud Abbas frequently displays maps which showing “Palestine” replacing all of Israel; Israel is completely wiped off these official Palestinian Authority maps.    Fatah and Hamas terrorists have been responsible for over 500 Israeli deaths each, as well as thousands of wounded, in the years since Israel extended its hand in peace at Oslo.

Obama’s other phrase, “cycle of violence,” was also extremely troubling in light of the real cause of the problems in the Middle East.  “Cycle of violence” equates Arab terrorism and rocket attacks with Israeli defensive actions.  The term “cycle of violence” is a “code word,” frequently used by those who seek to blame the Jewish State and deny the realities of the Middle East.  The term is never used by those who understand that the root of the problem is “Palestinian” Arab unrelenting efforts to destroy Israel.

Obama’s “the biggest problem is cynicism” and “cycle of violence” remarks created a bit of uproar in the press.  Obama resumed trying to measure his words about the Middle East more carefully while campaigning.  Some of Obama’s supporters even denied that Obama had ever made these remarks (despite the fact that Obama’s remarks could be viewed on You Tube).  At another AIPAC event in the fall of 2007, an Obama campaign worker asked me to contribute to Obama.  When I explained why I had no interest in supporting Obama, the campaign worker insisted that Obama never used the term “cycle of violence” even though I had heard it, live, with my own ears.

Obama’s remarks at the March 2007 AIPAC reception provided a valuable clue to his real intentions in the event he was elected president.  After hearing Obama speak, I began carefully studying Obama’s other statements and actions.  In addition to running for Congress myself against a liberal Democratic Obama supporter, I ended up speaking for the McCain campaign about the dangers that an Obama presidency would pose.

Obama’s Middle East policies throughout his first year in office unfortunately have proven that it was all too right to be alarmed by Obama’s “cycle of violence” and “biggest problem is cynicism” comments.  The Obama administration has exerted daily pressure on Israel to make life-endangering concessions, de-legitimized Israel’s right to defend herself, promoted the Palestinian agenda at every opportunity, shut out the voices of organizations concerned with Israeli security while placing pro-Palestinian organizations at the “head of the table”, refused to listen to moderate Arab concerns about Iran, and refuses to appropriately deal with the Iranian threat.

As former American Ambassador to the U.N. John Bolton succinctly put it following Obama’s September 23, 2009 United Nations speech, Obama “threw Israel under the bus.”  Or, as one of my witty friend, activist Eytan Laor put it, there was something to drink at Obama’s reception – koolaid.

Actually, Obama was correct that “cynicism” is a significant problem.  I’m referring to the real cynicism of candidates who say one thing during a campaign, and do another upon taking office.  Aside from occasional slip ups such as the comments I heard, during his campaign, Obama was careful to sugar-coat his statements, and “cynically” often told Jewish audiences what they wanted to hear.  Then he did the opposite upon taking office.

My encounter early in the millennium with Hillary Clinton also epitomized this type of political cynicism.   Mrs. Clinton was plotting one of her runs for office at the time, and I was working at a law firm whose partners were major supporters of the Democratic party.  The law firm’s well-appointed New York office was located across the street from Mrs. Clinton’s not-so-luxurious campaign headquarters.  When Mrs. Clinton wanted to hold a large campaign meeting, she borrowed the law firm’s conference room.  (This occurred so often that one of Mrs. Clinton’s Secret Service bodyguards began dating one of the female lawyers at the firm.)

Not surprisingly in light of her Machiavellian remark, Mrs. Clinton’s Middle East statements have transformed dramatically at each stage of her career.  As First Lady, during a State visit to the Middle East in 1999, Clinton hugged and kissed Suha Arafat (arch-terrorist Yasser Arafat’s wife) after sitting quietly and listening to Mrs. Arafat accuse Israelis of using intensive cancer-causing poisonous gases and chemicals on the Palestinian people.  After Mrs. Arafat’s venomous diatribe, Clinton also called for a Palestinian state – at a time when most unbiased individuals still understood that such a state would be a terrorist enclave.

While campaigning for the Senate and later the presidency, Mrs. Clinton suddenly made statements as if she was pro-Israel when the public would hear her – but behind the scenes as New York’s Senator, Mrs. Clinton refused to take real pro-Israel action.

Since joining the Obama administration as Secretary of State, Mrs. Clinton is back to full “kissing Suha” mode.    She furiously berated Israel for daring to build homes in its capital city, Jerusalem, and refused to abide by the Sharon-Bush letter agreements permitting building.

We would love to hear from you! Please fill out this form and we will get in touch with you shortly.
Trending Z
Uncategorized April 1, 2015
ZOA Analysis: Most American Rabbis Who Are Boycotting Some Israeli Ministers Are From Extremist Left Wing Groups (J Street; T’ruah; JVP)
Uncategorized April 1, 2015
ZOA: Israel’s Reasonable Judicial Reform Proposals Are Good for Democracy, the Rule of Law and the Economy
Uncategorized April 1, 2015
Israel’s “Right of Return” Grandparent Clause is De-Judaizing the Jewish State – Eliminate It
News April 1, 2015
ZOA is Disappointed, Offended and Frightened by 211 U.S. House Votes Supporting Jew-Hating, Israel-Hating Rep. Ilhan Omar
Center for Law & Justice
We work to educate the American public and Congress about legal issues in order to advance the interests of Israel and the Jewish people.
We assist American victims of terrorism in vindicating their rights under the law, and seek to hold terrorists and sponsors of terrorism accountable for their actions.
We fight anti-Semitism and anti-Israel bias in the media and on college campuses.
We strive to enforce existing law and also to create new law in order to safeguard the rights of the Jewish people in the United States and Israel.
Our Mission
ZOA STATEMENT
The ZOA speaks out for Israel – in reports, newsletters, and other publications. In speeches in synagogues, churches, and community events, in high schools and colleges from coast to coast. In e-mail action alerts. In op-eds and letters to the editor. In radio and television appearances by ZOA leaders. Always on the front lines of pro-Israel activism, ZOA has made its mark.
Connect with us
Sign up for our Newsletter