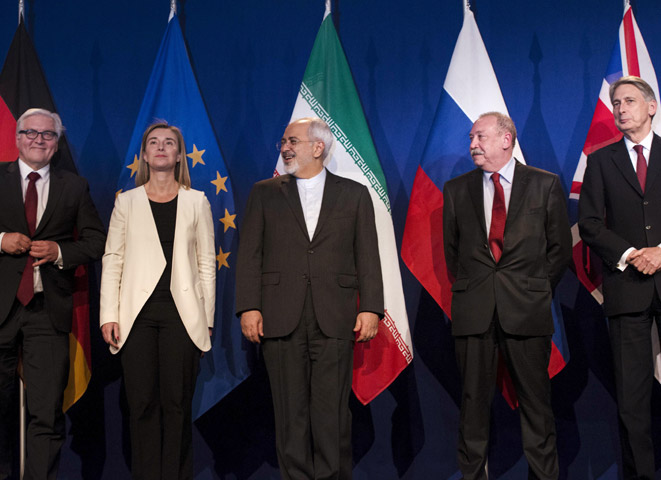 The framework agreement between the P5+1 and Iran will lead to a bad and dangerous deal that will ensure a complete lifting of the nuclear sanctions and enable Iran to preserve its nuclear capabilities. Such a deal would not block Iran’s path to the bomb; it would pave Iran’s path to the bomb. It will not result in a nuclear program for peaceful purposes, but in a nuclear weapons program. It will also increase the risk of nuclear proliferation in the region and the risk of war.

A deal based on this framework would constitute a serious threat to the region and the world and would threaten the very existence of the State of Israel. Such a deal will also bolster the Iranian economy and provide it with enormous resources. This, at the very time that Iran is stepping up its aggression in the region and repeatedly threatens to annihilate Israel. The deal would increase Iran’s aggression and terror activities across the Middle East and the world.

This deal is a capitulation to Iranian dictates. It accords Iran international legitimacy for its nuclear program, whose sole purpose is the manufacture of nuclear bombs. The framework will lead to the lifting of sanctions against Iran.The deal will leave Iran with substantial nuclear capabilities. Within a few years it will remove the constraints on the Iranian nuclear program. Iran will possess considerable uranium-enrichment capabilities that will enable it to manufacture many nuclear bombs.The deal will not shut down a single nuclear facility. It will not destroy a single centrifuge. It will not terminate the R&D of advanced centrifuges.The alternative to this bad deal is not war but a better deal that will involve a significant dismantling of Iran’s nuclear infrastructure and a demand for a cessation of Iranian aggression and terror across the region and the world.

1. Why is the deal dangerous to Israel’s security?Because it completely lifts the sanctions and enables Iran to preserve its nuclear capabilities. A deal based on this framework will pose a serious danger to the region and the world and will threaten Israel’s very survival. Such a deal will also bolster the Iranian economy. Iran will not use the flow of money for the welfare of its citizens, but for its continued spreading of terror across the globe.

2. Why does Israel oppose the agreement? The Israeli cabinet is united in opposing this deal. The deal was made without taking into account the existential threat to Israel posed by Iran. Such a deal does not block Iran’s path to the bomb. It paves Iran’s path to the bomb. It will not lead to a nuclear program for peaceful purposes but to a military nuclear program on an unprecedented scale. The deal also increases the risk of nuclear proliferation in the Middle East. It could spark an arms race with the Sunni states.

3. Why does Israel view this as a bad deal? Because this deal does not shut down a single nuclear facility, it does not dismantle a single centrifuge and it enables Iran to continue its R&D of advanced centrifuges and pursue its long range missiles program. Moreover, this deal does not allow free inspection, but only inspection of the nuclear facilities that we currently know of. Experience has shown that Iran tends to conceal its nuclear facilities from the international community, as was the case with Fordo.

4. Why is Israel one of the primary objectors to this deal?

Because Israel is the country most threatened by Iran. Iran openly calls for Israel’s annihilation and works towards this end. Israel will not accept a deal which provides nuclear weapons to a country that vows to destroy it. Israel demands that any final agreement with Iran will include a clear recognition of Israel’s right to exist. This is not a personal issue between the Israeli Prime Minister and the American President. It’s a difference of policy, not a clash of personalities.

5. Why not give this deal a chance?

Twenty years ago, when a similar deal was signed with North Korea, the same promises were made that this was a deal that would prevent North Korea from obtaining nuclear weapons. Nevertheless, following that deal, North Korea conducted nuclear tests. This deal lifts the pressure of sanctions off Iran and at the same time enables it to keep all the components of its nuclear program. Billions of dollars will flow into the Iranians coffers not for schools or hospitals or roads, but to pump up Iran’s terror machine throughout the world and its military machine that is now engaged in conquest throughout the Middle East – in Iraq, in Syria, in Yemen, around the borders of Israel and elsewhere.

6. How does Israel respond to the claim that the alternative to this deal is war?

This is a false claim. It serves as an excuse for a lack of willingness to insist on better terms. The alternative to this deal is a better deal that will significantly dismantle Iran’s nuclear capabilities and force it to cease its terror activities across the world.

7. What alternative does Israel propose to this deal?

The alternative to this bad deal is not war but another deal that will involve a significant dismantling of Iran’s nuclear infrastructure and a demand for a cessation of Iranian aggression and terror across the region and the world. This is compared to the current deal which is a capitulation to Iranian diktats. Iran is granted international legitimacy for its nuclear program, the sole purpose of which is the manufacturing of nuclear bombs. There’s still time to get a better deal and apply pressures on Iran to abandon, to roll back its nuclear program and to stop its vast aggression in the region.

This article was originally published by the Israel Ministry of Foreign Affairs and is available online here.

We would love to hear from you! Please fill out this form and we will get in touch with you shortly.
Trending Z
News April 6, 2015
Fox News Joins ZOA in Exposing ADL’s Dangerous, Extremist “Educational” Programs & Joins JNS Editor Tobin in Urging Firing ADL CEO Jonathan Greenblatt
Uncategorized April 6, 2015
U.S. Amb. to Israel Thomas Nides Endangers Israel’s Security & Interferes with Israeli Sovereignty, Violating International Law
ZOA in the news April 6, 2015
ZOA Slams Extreme Anti-Israel Berkeley Law School Bylaw | Israel National News – Arutz Sheva
News April 6, 2015
Lapid Lied, Telling UN Assembly ‘Large Majority of Israelis’ Want 2-State Solution. They Don’t. – Jewish Press
Center for Law & Justice
We work to educate the American public and Congress about legal issues in order to advance the interests of Israel and the Jewish people.
We assist American victims of terrorism in vindicating their rights under the law, and seek to hold terrorists and sponsors of terrorism accountable for their actions.
We fight anti-Semitism and anti-Israel bias in the media and on college campuses.
We strive to enforce existing law and also to create new law in order to safeguard the rights of the Jewish people in the United States and Israel.
Our Mission
ZOA STATEMENT
The ZOA speaks out for Israel – in reports, newsletters, and other publications. In speeches in synagogues, churches, and community events, in high schools and colleges from coast to coast. In e-mail action alerts. In op-eds and letters to the editor. In radio and television appearances by ZOA leaders. Always on the front lines of pro-Israel activism, ZOA has made its mark.
Connect with us
Sign up for our Newsletter