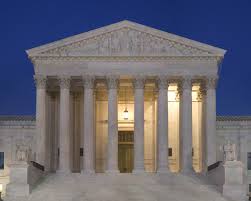 The Zionist Organization of America (ZOA) criticized today’s decision by the U.S. Supreme Court, which invalidated a 2002 federal law permitting Jerusalem-born Americans to list “Israel” as their birthplace on their passports.  In a 6-3 vote, the Court concluded that the President has the exclusive power to grant formal recognition to a foreign sovereign, and that the 2002 law infringes on the President’s consistent decision not to recognize Israel’s sovereignty over Jerusalem.  The majority opinion was delivered by Justice Anthony M. Kennedy and joined by the three Jewish Justices on the Court.

Chief Justice John G. Roberts dissented, emphatically stating his opinion that the Court’s decision was, “a first:  Never before has this Court accepted a President’s direct defiance of an Act of Congress in the field of foreign affairs.”  Both the Chief Justice and Justice Antonin Scalia, who issued a separate dissenting opinion, questioned the majority’s conclusion that the President has exclusive recognition power and that the Jerusalem passport law involved recognizing a foreign sovereign.  Justice Scalia challenged the “Court’s perception that the Nation ‘must speak with one voice’ about the status of Jerusalem,” likening this approach to how a monarchy operates and opining that the approach “will erode the structure of separated powers that the People established for the protection of their liberty.”

The U.S. government has gone on the record to state that it refuses to recognize Israeli sovereignty over Jerusalem. Yet as the ZOA’s amicus briefs have made clear, there is example after example of how the Executive – including the President and the State Department – have referred to Jerusalem as part of Israel.

Morton A. Klein, the ZOA’s National President, and Susan B. Tuchman, Esq., Director of the ZOA’s Center for Law and Justice, expressed their disappointment with the Supreme Court’s decision:  “The Jerusalem passport law is not even about recognizing Israel’s sovereignty over Jerusalem.  It simply gives Americans born in Jerusalem the right to identify themselves with Israel, if that is their choice.  Any concerns that the law might be construed as recognition of Israel’s sovereignty over Jerusalem could easily have been remedied by the Executive issuing a disclaimer, making it clear that the State Department’s compliance with the law did not mean that the U.S. had officially recognized Jerusalem as part of Israel.  That is exactly what the State Department did when Americans born in Taiwan were afforded the right to have their birthplace listed as ‘Taiwan,’ even though the U.S. did not recognize Taiwan as a separate sovereign from China.

“The U.S. government has gone on the record to state that it refuses to recognize Israeli sovereignty over Jerusalem.  Yet as the ZOA’s amicus briefs have made clear, there is example after example of how the Executive – including the President and the State Department – have referred to Jerusalem as part of Israel.  It is also important to note that Menachem Zivotofsky, whose family has fought for almost 12 years to have Israel listed as his birthplace on his passport, was an American born in western Jerusalem – an area of Jerusalem which virtually no one disputes is, and will always be part of Israel.

“The Jewish connection to Jerusalem in the land of Israel is irrefutable, going back thousands of years.  Jerusalem is mentioned 700 times in Jewish holy books.  Wherever Jews are around the world, we pray facing toward Jerusalem.  Jerusalem is mentioned 20 times a day in our prayers, and on Yom Kippur and at the end of our Passover Seders, we recite the words, ‘Next year in Jerusalem.’  The majority of the people living in Jerusalem since the mid-1800’s have been Jews.  Yet we are concerned that the Court’s decision will be twisted by Israel-bashers to deny the Jewish connection to Jerusalem and Israel’s right to any part of the city.

“The ZOA is proud to have been the only Jewish organization in the U.S. to have fought for the enforcement of the Jerusalem passport law, almost since the time it was enacted.  We commend the Zivotofsky family for taking the lead in fighting for the right of Americans born in Jerusalem to identify with their birthplace in Israel.  We praise Nathan Lewin and Alyza Lewin, attorneys for the Zivotofsky family, for waging a brilliant legal battle to uphold and enforce the Jerusalem passport law.  And we thank the following ZOA National Board members – Attorneys David I. Schoen (who was counsel of record on all of the ZOA’s amicus briefs in this case), Edward M. Siegel, Cardozo Law Professor Malvina Halberstam, and Clifford A. Rieders – for all their support and expert input on the ZOA briefs filed in this case, both in the U.S. Court of Appeals and the U.S. Supreme Court.”

We would love to hear from you! Please fill out this form and we will get in touch with you shortly.
Trending Stories
News June 8, 2015
NEW YORK POST: Democratic Leaders’ Shocking Silence Over Attacks on Israel by Fellow Dems
News June 8, 2015
ZOA Criticizes ADL for Featuring Hostile-to-Israel Speakers at ADL Never-Is-Now Conference
Uncategorized June 8, 2015
Mort Klein Mourns Passing of His Cousin Israeli Priest Gregor Pawlowski (Yaakov Griner) – Who Became a Priest After Gentiles Raised/Saved Him
News June 8, 2015
ZOA: Remove Jew-Haters from Congressional Committees: AOC, Tlaib, Omar, McCollum, etc. Endangered Jewish (and Arab) Lives Twice This Week
Our Mission
ZOA STATEMENT
The ZOA speaks out for Israel – in reports, newsletters, and other publications. In speeches in synagogues, churches, and community events, in high schools and colleges from coast to coast. In e-mail action alerts. In op-eds and letters to the editor. In radio and television appearances by ZOA leaders. Always on the front lines of pro-Israel activism, ZOA has made its mark.
Center for Law & Justice
We work to educate the American public and Congress about legal issues in order to advance the interests of Israel and the Jewish people.
We assist American victims of terrorism in vindicating their rights under the law, and seek to hold terrorists and sponsors of terrorism accountable for their actions.
We fight anti-Semitism and anti-Israel bias in the media and on college campuses.
We strive to enforce existing law and also to create new law in order to safeguard the rights of the Jewish people in the United States and Israel.
Related Articles
OP-ED BY: ZOA Poll: A Plurality Of Americans Think Hagel A Bad Choice For Secretary Of Defense