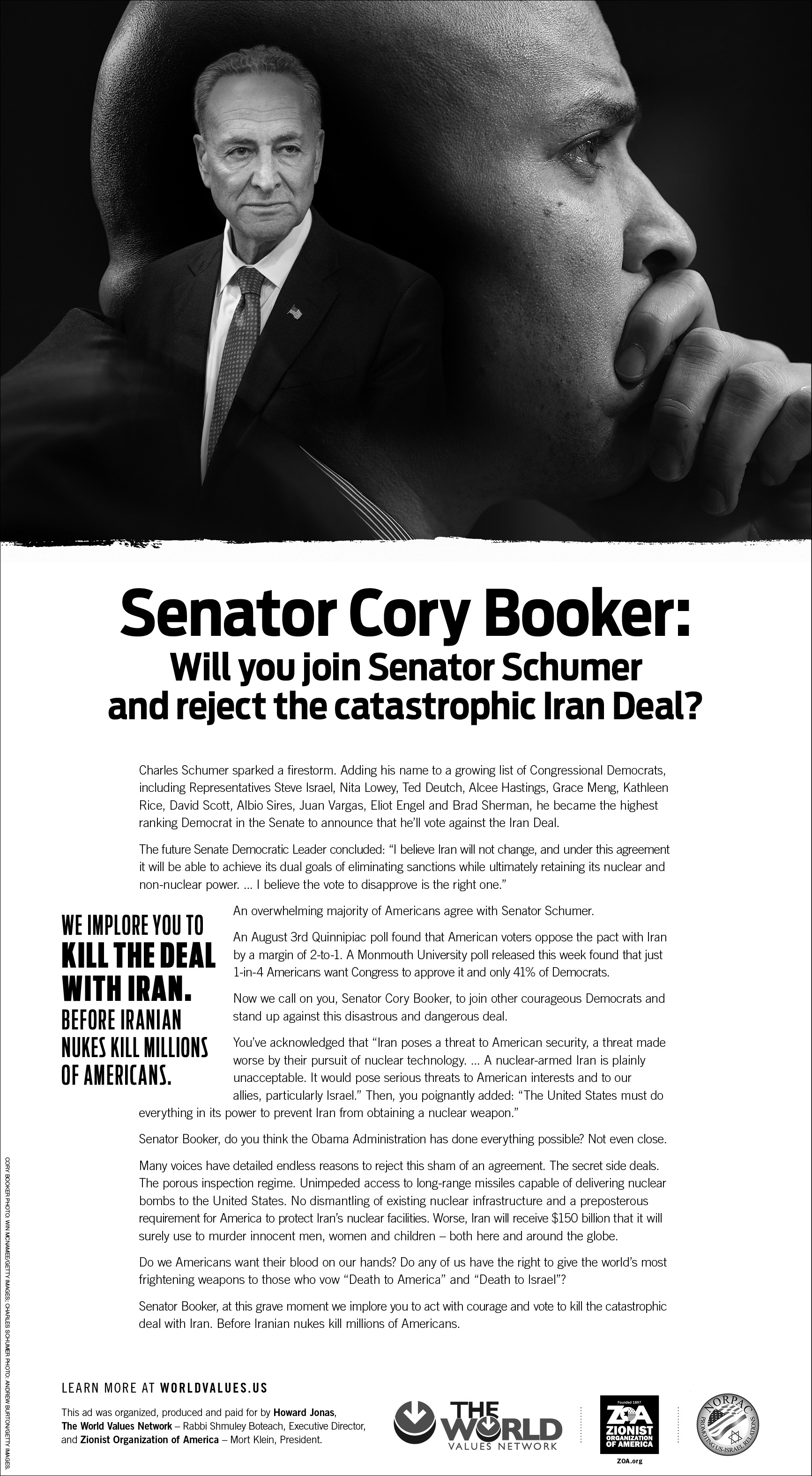 The future Senate Democratic Leader concluded: “I believe Iran will not change, and under this agreement it will be able to achieve its dual goals of eliminating sanctions while ultimately retaining its nuclear and non-nuclear power. … I believe the vote to disapprove is the right one.”

An overwhelming majority of Americans agree with Senator Schumer.

An August 3rd Quinnipiac poll found that American voters oppose the pact with Iran by a margin of 2-to-1. A Monmouth University poll released this week found that just 1-in-4 Americans want Congress to approve it and only 41% of Democrats.

Now we call on you, Senator Cory Booker, to join other courageous Democrats and stand up against this disastrous and dangerous deal.

Now we call on you, Senator Cory Booker, to join other courageous Democrats and stand up against this disastrous and dangerous deal.

You’ve acknowledged that “Iran poses a threat to American security, a threat made worse by their pursuit of nuclear technology. … A nuclear-armed Iran is plainly unacceptable. It would pose serious threats to American interests and to our allies, particularly Israel.” Then, you poignantly added: “The United States must do everything in its power to prevent Iran from obtaining a nuclear weapon.”

Senator Booker, do you think the Obama Administration has done everything possible? Not even close.

Many voices have detailed endless reasons to reject this sham of an agreement. The secret side deals. The porous inspection regime. Unimpeded access to long-range missiles capable of delivering nuclear bombs to the United States. No dismantling of existing nuclear infrastructure and a preposterous requirement for America to protect Iran’s nuclear facilities. Worse, Iran will receive $150 billion that it will surely use to murder innocent men, women and children – both here and around the globe.

Do we Americans want their blood on our hands? Do any of us have the right to give the world’s most frightening weapons to those who vow “Death to America” and “Death to Israel”?

Senator Booker, at this grave moment we implore you to act with courage and vote to kill the catastrophic deal with Iran. Before Iranian nukes kill millions of Americans.

We would love to hear from you! Please fill out this form and we will get in touch with you shortly.
Trending Z
News August 17, 2015
ZOA Condemns U.S. State Dept. & U.S. Amb. Nides For Siding with Antisemitic, Discriminatory Palestinian & Hamas Terrorists re: the Temple Mount, Violating Jews’ Religious Freedom
News August 17, 2015
ZOA’s Klein JPost Op-Ed: There is Nothing Extreme About Israel’s New Government
Uncategorized August 17, 2015
FLASH: ISRAEL-JORDAN PEACE TREATY (1994) GUARANTEES JEWS ACCESS TO THE TEMPLE MOUNT – LET MY PEOPLE PRAY
Uncategorized August 17, 2015
ZOA Analysis: Most American Rabbis Who Are Boycotting Some Israeli Ministers Are From Extremist Left Wing Groups (J Street; T’ruah; JVP)
Center for Law & Justice
We work to educate the American public and Congress about legal issues in order to advance the interests of Israel and the Jewish people.
We assist American victims of terrorism in vindicating their rights under the law, and seek to hold terrorists and sponsors of terrorism accountable for their actions.
We fight anti-Semitism and anti-Israel bias in the media and on college campuses.
We strive to enforce existing law and also to create new law in order to safeguard the rights of the Jewish people in the United States and Israel.
Our Mission
ZOA STATEMENT
The ZOA speaks out for Israel – in reports, newsletters, and other publications. In speeches in synagogues, churches, and community events, in high schools and colleges from coast to coast. In e-mail action alerts. In op-eds and letters to the editor. In radio and television appearances by ZOA leaders. Always on the front lines of pro-Israel activism, ZOA has made its mark.
Connect with us
Sign up for our Newsletter