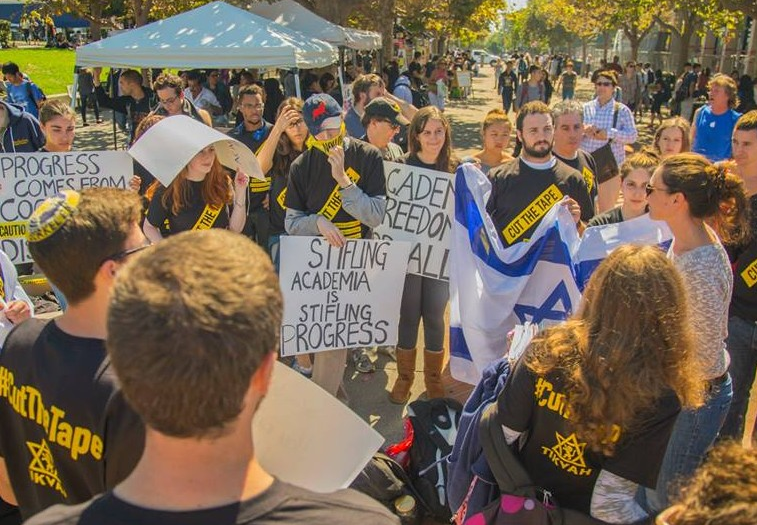 JPost: ZOA/Others File Complaint about Anti-Semitism on Campus
ZOA in the news

The governing body of the University of California voted to establish a committee to evaluate campus anti-Semitism following an intense lobbying campaign by Jewish organizations.

The decision on Friday came after Jewish representatives issues scathing denunciations of a proposed list of Principles Against Intolerance that did not directly mention anti-Semitism.

The regents had been expected to vote on a statement regarding anti-Semitism after intense lobbying for the university to officially adopt the State Department’s definition of anti-Semitism, which includes the delegitimization of Israel.

It is time for our university to recognize, address and take a stance against anti-Semitism and all forms of identity-based hatred.

More than 30 organizations, including Jewish fraternity AEPI, the Simon Wiesenthal Center and the Zionist Organization of America wrote to University of California regent Bruce D. Varner in July, requesting that substantive measures be taken to combat rising anti-Semitism on affiliated campuses.

Among the various incidents recalled by the complainants were one in which “Zionists should be sent to the gas chamber” was found written on a bathroom wall at UC Berkeley, one in which a Jew applying for a student union position found her suitability questioned on the basis of her religion, and the discovery of swastikas painted on a Jewish fraternity house at UC Davis.

“Originally expected to address the dramatic rise in anti-Semitism at UC, the UC office of the president instead released a proposed Principles Against Intolerance statement last week that didn’t even mention anti-Semitism and was a shocking disappointment. At today’s meeting, more than six regents condemned the statement for not addressing the serious problem of anti-Semitism on UC campuses,” the AMCHA Initiative, one of the groups pushing for the changes said.

“What is happening at UC to Jewish students is ugly and frightening and it’s only getting worse,” AMCHA’s Tammi Rossman-Benjamin told the regents. “In the wake of virulently anti-Israel activity, especially BDS campaigns, Jewish UC students have reported being harassed, assaulted, threatened, vilified and discriminated against, their property defaced and destroyed, and their events disrupted and shut down. This must be addressed immediately.”

“Enough is enough. It is time for our university to recognize, address and take a stance against anti-Semitism and all forms of identity-based hatred. It is time to give students the opportunity to speak about and define their experiences. Only then can we begin to heal the toxic campus climate, which has developed here due to years of inaction.”

“It was clear that their voices were heard because every single regent who spoke afterward expressed outrage at the notion that a generalized ‘statement against intolerance’ would be enough to address the toxic climate that has developed on UC campuses,” the campus activist group StandWithUs said Sunday.

This article was published by JPost and may be found here.

We would love to hear from you! Please fill out this form and we will get in touch with you shortly.
Trending Z
News September 21, 2015
New Biden Nominees Opposed Abraham Accords & Involved in Israeli Election Interference
Uncategorized September 21, 2015
ZOA Letter to DOJ & FBI on New “Mapping Project” Antisemitic Threat by ZOA Pres. Morton Klein, Dir. of Research/Special Projects Liz Berney, Esq., Dir. Center for Law & Justice Susan Tuchman, Esq.
News September 21, 2015
ZOA’s Condemnation of Black Lives Matter Defended by JNS’ Tobin: Jews Supporting BLM Empowered Antisemitism
Op-Ed September 21, 2015
ZOA’s Mort Klein JPost Op-Ed: BDS Mapping Project Targets Every Jew, Including Left Wing, Israelophobic Jews
Center for Law & Justice
We work to educate the American public and Congress about legal issues in order to advance the interests of Israel and the Jewish people.
We assist American victims of terrorism in vindicating their rights under the law, and seek to hold terrorists and sponsors of terrorism accountable for their actions.
We fight anti-Semitism and anti-Israel bias in the media and on college campuses.
We strive to enforce existing law and also to create new law in order to safeguard the rights of the Jewish people in the United States and Israel.
Our Mission
ZOA STATEMENT
The ZOA speaks out for Israel – in reports, newsletters, and other publications. In speeches in synagogues, churches, and community events, in high schools and colleges from coast to coast. In e-mail action alerts. In op-eds and letters to the editor. In radio and television appearances by ZOA leaders. Always on the front lines of pro-Israel activism, ZOA has made its mark.
Connect with us
Sign up for our Newsletter