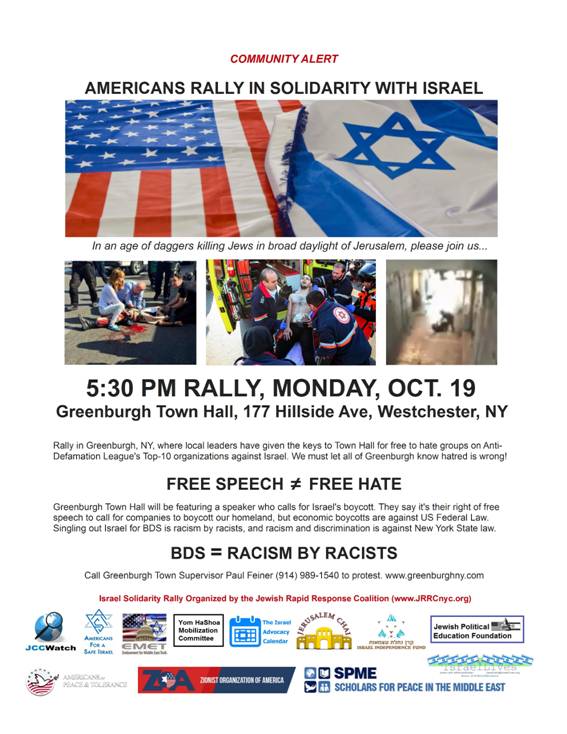 On Monday, October 19, 2015, at 5:30 PM, the Jewish Rapid Response Coalition (including the Zionist Organization of America and other pro-Israel and anti-terrorism groups) will hold a pro-Israel rally in front of the Greenburgh Town Hall, 177 Hillside Avenue, White Plains, New York.  The rally will protest an anti-Israel BDS (boycott, divestment and sanctions against Israel) event that will take place inside the Greenburgh Town Hall.  Our rally will send a message that anti-Semitism and hate speech are not welcome.  Especially now – when Palestinian Arab terrorists are assaulting, shooting, knifing, plowing cars into, murdering and maiming innocent Israeli Jewish men, women and children throughout Israel, we cannot be silent when anti-Israel groups spew their hatred right here in our own American public halls.

The Town of Greenburgh’s elected officials are providing the use of the town’s taxpayer-funded town hall for an event about “how BDS can be even more effective,” sponsored by a cabal of extremist anti-Israel, pro-BDS organizations including:  Jewish Voice for Peace, Wespac Foundation, Tree of Life Educational Fund, Friends of Sabeel-North America and Kairos USA.

The Anti-Defamation League (ADL) lists Greenburgh Town Hall event sponsor, Jewish Voice for Peace (JVP) as “a leader in the American anti-Israel movement” and explains: “JVP uses its Jewish identity to shield the anti-Israel movement from allegations of anti-Semitism and provide a greater degree of credibility to the anti-Israel movement.”   JVP brags on its website that it worked for the past decade to obtain the Presbyterian Church (USA) decision (in June 2014) to divest from companies that do business in Israel.

The anti-Israel BDS event in the Greenburgh Town Hall features Suhail Khalilieh and far-left Ha’aretz columnist Gideon Levy.   According to the Committee for Accuracy in Middle East Reporting in America (CAMERA), featured speaker Gideon Levy “is known in Israel as an acrimonious, anti-Israel ideologue and activist, recently arrested for spitting and cursing at IDF soldiers, who often invents his own facts to support his radical agenda. His fan base consists primarily of fellow Israel haters and activists, while mainstream Israelis and journalists dismiss him as a dishonest propagandist.”  CAMERA also explains: “Discredited by the mainstream in his own country, [Gideon] Levy has taken to spewing his vitriol and promoting boycotts against the Jewish state in foreign countries where he can try to influence uninitiated audiences with dishonest calumnies against Israel.”  Anti-Israel activist Suhail Khalilieh reportedly recently wrote:  “Israel will always be shunned within the international community as an occupier.”

The citizens and state of New York have spoken out strongly against anti-Israel boycotts.  The New York State Assembly recently passed a resolution condemning BDS, noting that that “the international Boycott, Divestment, and Sanctions movement and its agenda are damaging to the causes of peace, justice, equality, democracy, and human rights for all peoples in the Middle East.”   In addition, New York State’s human rights law makes it illegal for any person to, or enable any person to, boycott or otherwise discriminate based on national origin.   Federal law also counteracts participation by U.S. citizens in foreign nation’s boycotts against a US ally.

We hope that you will join us on Monday in speaking out against BDS and against anti-Israel hatred.

The Jewish Rapid Response Coalition (including ZOA) recently organized the Times Square Stop Iran Rally that drew 12,000 attendees from across the country, the follow-up rally in front of NYS Senators Schumer and Gillibrand’s office that drew 7,000 protestors, and the Klinghoffer Rally at Lincoln Square, attended by 5,000 people.

A copy of the flyer for Monday’s rally is below.

We would love to hear from you! Please fill out this form and we will get in touch with you shortly.
Trending Z
News October 16, 2015
ZOA Condemns U.S. State Dept. & U.S. Amb. Nides For Siding with Antisemitic, Discriminatory Palestinian & Hamas Terrorists re: the Temple Mount, Violating Jews’ Religious Freedom
Uncategorized October 16, 2015
FLASH: ISRAEL-JORDAN PEACE TREATY (1994) GUARANTEES JEWS ACCESS TO THE TEMPLE MOUNT – LET MY PEOPLE PRAY
Uncategorized October 16, 2015
ZOA Analysis: Most American Rabbis Who Are Boycotting Some Israeli Ministers Are From Extremist Left Wing Groups (J Street; T’ruah; JVP)
Uncategorized October 16, 2015
Israel’s “Right of Return” Grandparent Clause is De-Judaizing the Jewish State – Eliminate It
Center for Law & Justice
We work to educate the American public and Congress about legal issues in order to advance the interests of Israel and the Jewish people.
We assist American victims of terrorism in vindicating their rights under the law, and seek to hold terrorists and sponsors of terrorism accountable for their actions.
We fight anti-Semitism and anti-Israel bias in the media and on college campuses.
We strive to enforce existing law and also to create new law in order to safeguard the rights of the Jewish people in the United States and Israel.
Our Mission
ZOA STATEMENT
The ZOA speaks out for Israel – in reports, newsletters, and other publications. In speeches in synagogues, churches, and community events, in high schools and colleges from coast to coast. In e-mail action alerts. In op-eds and letters to the editor. In radio and television appearances by ZOA leaders. Always on the front lines of pro-Israel activism, ZOA has made its mark.
Connect with us
Sign up for our Newsletter