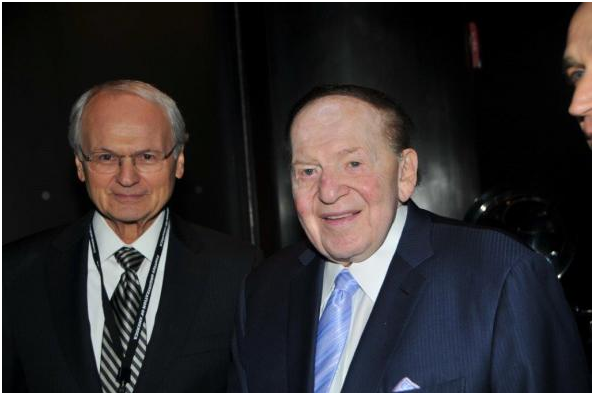 The enemy is not Islam. Ron Dermer, Israeli Ambassador to the United States, wants to be clear that we recognize the enemy as “militant Islam.”

The keynote speaker at the Louis Brandeis award dinner of the Zionist Organization of America on Nov. 22 at the Grand Hyatt in Manhattan, Dermer warned that Muslim terrorist groups are fighting to create a world without Israel and America, where “women are chattel, gays are hanged and minorities are eliminated.”

The solution, he said, calls for a reformation within Islam, away from militancy. “Faiths tend to be malleable. They get interpreted in different ways at different times. For most of the last 1,400 years, Islam was more tolerant to minorities than Christianity.”

Danny Danon insisted his appointment as Israel’s new representative to the United Nations is much harder than Dermer’s assignment in Washington. “I have been here only six weeks and it feels like six years.”

He denounced the UN for its tendency to draw equivalences between the Israeli and the Palestinian situation.

As for placing international observers on the Temple Mount to prevent clashes, Danon said, “We will not permit an international presence on Har Habayit in Jerusalem, our eternal capital.”

“The many concessions Israel made under Oslo as well as the Gaza withdrawal,” Voight said, “were some of the biggest mistakes Israel has made and it will be no mystery what will happen if they go ahead and give up Judea and Samaria.”

A video was screened showing ZOA board member Ruben Margules, of Brooklyn, leading a group of volunteers to give out gifts and food packages at an IDF army base.

Tim Boxer was a columnist at the New York Post for two decades. At the same time he has been a columnist for The New York Jewish Week for 35 years, and editor of 15MinutesMagazine.com for 16 years. He is the author of Jewish Celebrity Hall of Fame, interviews of Hollywood stars about their Jewish roots.

This article was published by NY Jewish Week and may be found here.

We would love to hear from you! Please fill out this form and we will get in touch with you shortly.
Trending Z
News December 1, 2015
ZOA Condemns U.S. State Dept. & U.S. Amb. Nides For Siding with Antisemitic, Discriminatory Palestinian & Hamas Terrorists re: the Temple Mount, Violating Jews’ Religious Freedom
Uncategorized December 1, 2015
FLASH: ISRAEL-JORDAN PEACE TREATY (1994) GUARANTEES JEWS ACCESS TO THE TEMPLE MOUNT – LET MY PEOPLE PRAY
Uncategorized December 1, 2015
ZOA Analysis: Most American Rabbis Who Are Boycotting Some Israeli Ministers Are From Extremist Left Wing Groups (J Street; T’ruah; JVP)
Uncategorized December 1, 2015
Israel’s “Right of Return” Grandparent Clause is De-Judaizing the Jewish State – Eliminate It
Center for Law & Justice
We work to educate the American public and Congress about legal issues in order to advance the interests of Israel and the Jewish people.
We assist American victims of terrorism in vindicating their rights under the law, and seek to hold terrorists and sponsors of terrorism accountable for their actions.
We fight anti-Semitism and anti-Israel bias in the media and on college campuses.
We strive to enforce existing law and also to create new law in order to safeguard the rights of the Jewish people in the United States and Israel.
Our Mission
ZOA STATEMENT
The ZOA speaks out for Israel – in reports, newsletters, and other publications. In speeches in synagogues, churches, and community events, in high schools and colleges from coast to coast. In e-mail action alerts. In op-eds and letters to the editor. In radio and television appearances by ZOA leaders. Always on the front lines of pro-Israel activism, ZOA has made its mark.
Connect with us
Sign up for our Newsletter