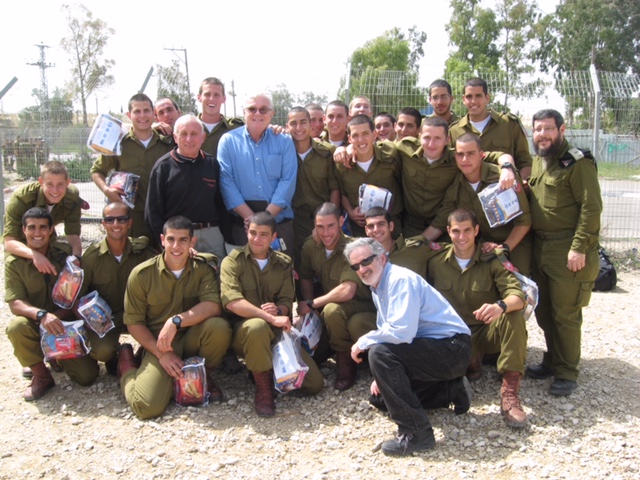 The Brooklyn Region of the Zionist Organization of America is exceptionally pleased to announce that this Purim marks their 16th annual Misloach Manot campaign. Dedicated to the brave men and women of the Israel Defense Forces who serve their country on a daily basis with remarkable valor, devotion and commitment to the security of its people, this campaign is a tangible display of tremendous appreciation for all that they do.  Through this ZOA campaign,  American Jews of all ages and affiliations coalesce to bring the incredible joy of Purim to members of the IDF through the distribution of over 9000 shalach manot packages along thousands of personalized  letters of support and love sent to them wherever they are stationed.

This year, the campaign has significantly expanded to include 29 Jewish schools from around the country.  From Portland, Oregon to Columbus, Ohio to Philadelphia, Pennsylvania to Long Island, New York and beyond, children from 1st to 12th grade have written heartfelt letters to IDF members in which they express their “Hakaras Hatov” to them for protecting their loved ones, for keeping Israel safe and secure and for putting their lives on the line for their people.

Because of the increasing danger that the IDF has been forced to confront during the last few months of unbridled Arab terror that has rocked the Jewish State, this Purim has taken on special significance.

Spearheading the Purim campaign for the last 16 years is ZOA Brooklyn regional president Rubin Margules. In an exclusive interview, Mr. Margules said, “I have been personally involved in this important ZOA campaign for many years and I must say that the letters written to the IDF by children this year leave you misty-eyed. They are so poignant, moving and beautifully written. The children are truly cognizant of the awesome responsibility that each person serving in the IDF has and they really want to give back in some way. That speaks volumes about the Ahavat Yisrael and Achdut that our children are being taught through their participation in this campaign.”

Mr. Margules adds that this year the Purim campaign is crackling with genuine excitement as yet another extraordinarily special Purim concert is being planned in Ariel for IDF members and their families.  “Last year, the ZOA sponsored a most successful and highly spirited concert in Kiryat Arba and over 500 soldiers attended. This year’s festivities will also include top-notch entertainment.”

These Purim activities are made possible by different ZOA regions including Michigan, Philadelphia and South Florida who are actively participating and bringing aboard additional donors as well.

With palpable emotion reverberating in his voice, Mr. Margules exclaimed, “This ZOA shalach manot campaign is a wonderful expression of the unwavering bond that American Jews share with Israel and its intrepid soldiers. It also represents a marvelous opportunity to show our appreciation at a minimal cost. Yet, the most important thing we can do for our children is to instruct them in what the Torah mandates of us all  and that is appreciation. Appreciation to Hashem and to everyone who sacrifices for Am Yisrael. By taking an active role and writing letters to the IDF, these children infuse such delight and joy in the hearts of these soldiers and it really bolsters their spirits.”

Because of the increasing danger that the IDF has been forced to confront during the last few months of unbridled Arab terror that has rocked the Jewish State, this Purim has taken on special significance. “Since the wave of lone wolf Arab stabbing and shooting attacks began, a high percentage of the casualties have been IDF members who have put their own lives in harm’s way to protect civilians at all costs.  They do so unflinchingly and with great courage and for that, we are eternally indebted to them,” said Mr. Margules.

Observing the human reaction to the phenomenon of expressing thanks, Mr. Margules said, “Appreciation is a two-way street and I witness this with my own eyes every year when I travel to Israel to distribute the shalach manos and the letters to the IDF.  Here we are, coming from America to show our thanks to them, and what I see and hear from these soldiers is their full throated appreciation and thanks to us for remembering and acknowledging their service and commitment.”

We would love to hear from you! Please fill out this form and we will get in touch with you shortly.
Trending Z
News March 16, 2016
ZOA Condemns U.S. State Dept. & U.S. Amb. Nides For Siding with Antisemitic, Discriminatory Palestinian & Hamas Terrorists re: the Temple Mount, Violating Jews’ Religious Freedom
News March 16, 2016
ZOA’s Klein JPost Op-Ed: There is Nothing Extreme About Israel’s New Government
Uncategorized March 16, 2016
FLASH: ISRAEL-JORDAN PEACE TREATY (1994) GUARANTEES JEWS ACCESS TO THE TEMPLE MOUNT – LET MY PEOPLE PRAY
Uncategorized March 16, 2016
ZOA Analysis: Most American Rabbis Who Are Boycotting Some Israeli Ministers Are From Extremist Left Wing Groups (J Street; T’ruah; JVP)
Center for Law & Justice
We work to educate the American public and Congress about legal issues in order to advance the interests of Israel and the Jewish people.
We assist American victims of terrorism in vindicating their rights under the law, and seek to hold terrorists and sponsors of terrorism accountable for their actions.
We fight anti-Semitism and anti-Israel bias in the media and on college campuses.
We strive to enforce existing law and also to create new law in order to safeguard the rights of the Jewish people in the United States and Israel.
Our Mission
ZOA STATEMENT
The ZOA speaks out for Israel – in reports, newsletters, and other publications. In speeches in synagogues, churches, and community events, in high schools and colleges from coast to coast. In e-mail action alerts. In op-eds and letters to the editor. In radio and television appearances by ZOA leaders. Always on the front lines of pro-Israel activism, ZOA has made its mark.
Connect with us
Sign up for our Newsletter