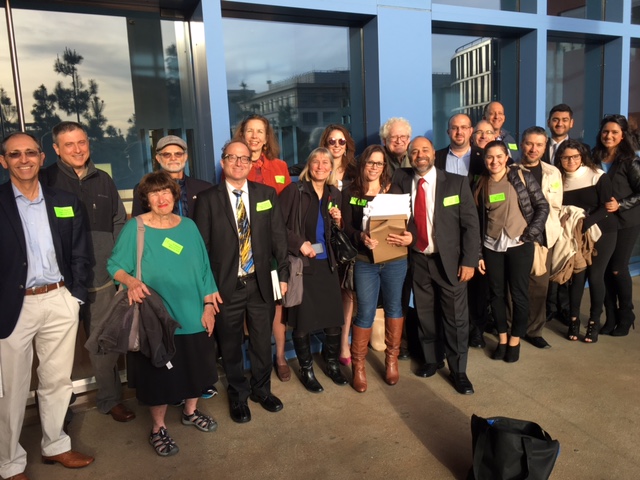 It is with great pleasure and pride that I write to inform you of yesterday’s victory in the fight to combat anti-Semitism on America’s college campuses.  The University of California (UC) Board of Regents which oversees 10 UC campuses and nearly 240,000 students, voted unanimously to adopt a statement of Principles Against Intolerance which, for the first time, acknowledged that certain forms of anti-Israel activity and rhetoric cross the line into anti-Semitism and contribute to a hostile atmosphere for Jewish and pro-Israel students.

The document included the strong statement by the Regents that “anti-Semitism, anti-Semitic forms of anti-Zionism, and other forms of discrimination have no place at the University of California.”  This statement can be used to counter the anti-Semitic demonization, delegitimization, and the impossible double standard being levied against Israel and its supporters on college campuses across the country.  This is truly a historic moment.

The ZOA has been working closely with our regional partners to consistently lobby the UC Regents to identify the extreme anti-Semitism that Jewish and pro-Israel students are facing and to take action against the perpetrators.  ZOA’s chapter in the Western region collaborated with the ZOA Center for Law and Justice to develop statements and provide information to the UC Regents, in addition to working with the ZOA Campus Department to identify specific incidents college students have been facing.

The ZOA has been working closely with our regional partners to consistently lobby the UC Regents to identify the extreme anti-Semitism that Jewish and pro-Israel students are facing and to take action against the perpetrators.

The lobbying effort lasted over a year and was bitterly contested by the anti-Semitic, hate groups so called Jewish Voice for Peace and Students for Justice in Palestine.  The groups opposing our efforts argued against the acknowledgement that certain anti-Israel activity and rhetoric constitutes hate speech which violates university policies and threatens the well-being of students supporting Israel.  These groups cited the First Amendment of the US Constitution which protects speech, including hate speech, and argued that a statement identifying the insidious correlation taking place would violate their rights to criticize Israel and advocate on Palestinian issues.

Despite the tremendous backlash against our efforts, the UC Regents did finally recognize that anti-Zionism, specifically the denial of Jewish rights to self-determination and their own state in their historic homeland and the targeting of student Israel supporters because of their beliefs, is anti-Semitic.  The Regents also acknowledged that anti-Israel events, including the contentious Boycott, Divestment, and Sanctions (BDS) campaigns, contribute to an atmosphere of hostility on campus which incites individuals to commit hate crimes against and target Jewish students.

Going into the meeting, the ZOA knew that the Regents would most likely adopt the full statement, including the language regarding anti-Zionism.  The ZOA statement and testimony at the meeting therefore thanked the Regents and focused instead on the inevitable problems which still need to be addressed; most importantly, the issue of enforcement.

The ZOA chose to highlight an incident which took place at UC Berkeley in the midst of the Regents’ efforts to address the rise in anti-Semitism.  Last October, the SJP held an anti-Israel rally where they encouraged the crowd to join in their chanting “Long Live the Intifada” meaning the support of murdering and maiming Jews. Within minutes, a Jewish student holding a pro-Israel sign was verbally and physically assaulted.  The Jewish student filed a harassment complaint.  The ZOA wrote twice to UC Berkeley’s Chancellor Dirks about the attack. Then ZOA published two opeds in the San Francisco Jewish paper. We urged him to publicly condemn the SJP’s incitement of violence as well as the attack itself.  We also urged him to enforce Berkeley’s rules and hold the SJP wrongdoers accountable.  Chancellor Dirks did not take either step.

Recently, the Jewish student was informed that his complaint was dismissed because school officials went to the SJP and not surprisingly, the SJP couldn’t identify the student’s attacker.  Only weeks after refusing to issue a statement about the violence against a Jewish student, Chancellor Dirks and two other senior administrators issued exactly such a statement condemning alleged potential threats against Muslim students.  The statement urged people to come forward with any information.  In the statement, the Chancellor and his colleagues specifically stated that they felt a genuine responsibility to confront prejudice and hatred against Muslim students.  This example demonstrates the unfair and troubling double standard being applied to Jewish students. While, UC Regents should rightly be commended for their efforts in better identifying how anti-Semitism is manifesting itself on their campuses, they should also ensure that the new policies against intolerance are equitably and universally enforced.

Regent Davis offered to propose amendments to the statement of Principles Against Intolerance which would clarify how the policies will be enforced.  Student Regent Avi Oved, an Israeli American and member of the AEPi Jewish fraternity who has been working diligently to address anti-Semitism, proposed a reporting mechanism requiring UC campuses to submit bi-monthly reports to the Regents on all bias and hate incidents that took place within the previous period, including what, if any, action was taken to address and rectify the incidents.

While ZOA, and our partners, have achieved a significant victory, the fight to guarantee enforcement and ensure Jewish students and Israel supporters are being adequately protected from discrimination and harassment will continue.

We would love to hear from you! Please fill out this form and we will get in touch with you shortly.
Trending Z
Uncategorized March 25, 2016
ZOA Analysis: Most American Rabbis Who Are Boycotting Some Israeli Ministers Are From Extremist Left Wing Groups (J Street; T’ruah; JVP)
Uncategorized March 25, 2016
ZOA: Israel’s Reasonable Judicial Reform Proposals Are Good for Democracy, the Rule of Law and the Economy
Uncategorized March 25, 2016
Israel’s “Right of Return” Grandparent Clause is De-Judaizing the Jewish State – Eliminate It
News March 25, 2016
ZOA is Disappointed, Offended and Frightened by 211 U.S. House Votes Supporting Jew-Hating, Israel-Hating Rep. Ilhan Omar
Center for Law & Justice
We work to educate the American public and Congress about legal issues in order to advance the interests of Israel and the Jewish people.
We assist American victims of terrorism in vindicating their rights under the law, and seek to hold terrorists and sponsors of terrorism accountable for their actions.
We fight anti-Semitism and anti-Israel bias in the media and on college campuses.
We strive to enforce existing law and also to create new law in order to safeguard the rights of the Jewish people in the United States and Israel.
Our Mission
ZOA STATEMENT
The ZOA speaks out for Israel – in reports, newsletters, and other publications. In speeches in synagogues, churches, and community events, in high schools and colleges from coast to coast. In e-mail action alerts. In op-eds and letters to the editor. In radio and television appearances by ZOA leaders. Always on the front lines of pro-Israel activism, ZOA has made its mark.
Connect with us
Sign up for our Newsletter