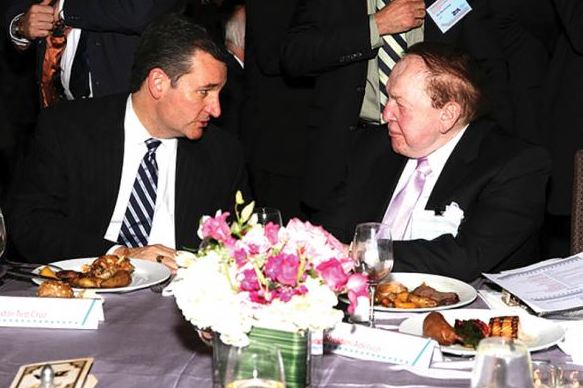 Anybody who cared about the civil rights movement in the 1960s, and even today, would immediately recognize the names Goodman, Schwerner and Chaney, activists, two Jewish, one black, murdered in Mississippi by the Klan. Today, many surely know the names Treyvon Martin or Eric Garner, young black men killed before their time.

But who, even readers of a Jewish newspaper, can identify Eyal Yifrach? Gilad Sha’ar? Naftali Fraenkel? Texas Sen. Ted Cruz, four months before running for president, five months after those Israeli teens were murdered, could speak their names by heart, no notes; he knew they were hitching near the Gush, murdered by Hamas, found in a field near Hebron in summer, 2014.

By the time he finished speaking about Israel, and those teens, at the Zionist Organization of America dinner in Manhattan later that year, hundreds of ZOA members were chanting, “Run Ted Run! Run Ted Run!”

On the eve of New York’s Republican Primary (April 19), Mort Klein, president of the ZOA, still remembers that evening with Cruz nearly two years ago: “He was spectacular. His sincere commitment to Israel, and support for Israel, is as strong as any politician I have ever dealt with. He has a tremendous grasp of the issues, of the Arab-Islamic war against Israel. People I speak to, ardent Zionists, all understand that Cruz is a tremendous friend of Israel.”

“[Cruz’s] sincere commitment to Israel, and support for Israel, is as strong as any politician I have ever dealt with.”

But do most Jews understand that, and how much does it matter? Klein paused. “I don’t know the answer to that.”

Even granting Trump’s populist virtues, he has nevertheless just spent a month — many months — exhibiting unpresidential vulgarities that would have torpedoed any other candidate. Nevertheless, the March 31 Quinnipiac University poll finds him leading Cruz in New York 56 percent to 20 percent, with Gov. John Kasich right behind at 19 percent. On April 5, Cruz won decisively in Wisconsin, with 48 percent of the vote, compared to 35 percent for Trump. In Cruz’ victory speech he said, under his administration, “Catholic school and Jewish day schools… will see a Supreme Court that protects their religious liberty, the fundamental freedom of every one of us to live according to our faith and conscience… We’ll see a president who stands with Israel. Clearly and unapologetically. Instead of negotiating with terrorists, we’ll rip to shreds this catastrophic Iranian nuclear deal.”

With the Republican Jewish “establishment” clearly less than pleased with the likelihood of a Trump nomination, nevertheless, support for unequivocally pro-Israel Cruz is less than one might suppose.

Sheldon Adelson, the Las Vegas casino operator and a strong Likud supporter, is the RJC’s leading political donor and is as influential as anyone within the organization, but he has yet to endorse Cruz, even with the Republican field down to three.

Another person of influence close to the RJC (who asked for anonymity because of his political and professional ties), and a leading fundraiser, tells us, “I haven’t stepped in yet to endorse Cruz. I haven’t stepped in to endorse anybody.” He heard Cruz at that ZOA dinner, “and I thought he was fabulous. I heard him speak at least 10 times, he’s terrific. I always leave saying, ‘I love this guy,’ and then I’ll hear that no one in the Senate “seems to like him. They don’t think he’s a team player.” And Trump? “Even worse. That’s why I may get on the Cruz team. I have given to his campaign, but I’m talking about making a real effort.”

Many leading Jewish Republicans “are in the same boat. We’re not going to sit it out completely, but a lot of us are a little burnt out. I have a friend who was on board with [Scott] Walker, then [Jeb] Bush, than [Marco] Rubio, and he said to me, ‘How much more can I do?’

“It’s frightening to me,” said the fundraiser, “that America is heading in a direction where somebody like [Rubio] can’t even make it to the end of the primaries … that so much bad was done to him by Trump,” and yes, the priority now is stopping Trump. “A lot of people feel that way. A lot of other people say Trump, for all of his flaws, speaks a very strong game for America.”

Support for Cruz is strong within Jewish conservative media. The Weekly Standard, edited by William Kristol, has taken Trump’s taunt of “Lyin’ Ted,” and turned it into a coronation: “Lion Ted.” John Podhoretz, editor of Commentary, has taken aim at Kasich, writing, “Does Kasich have a following? Yes, he does, of people who still cry when they listen to ‘Eleanor Rigby’…”

The ZOA’s Klein noted that at the dinner Alan Dershowitz (who was Cruz’s professor at Harvard Law School) “praised Cruz as the most brilliant student he’s ever had in 50 years of teaching law. Not one of the most brilliant — the most. An incredible statement, from a liberal Democrat about a conservative Republican.”

Cruz’s deputy chief of staff is Nick Muzin, a graduate of Yeshiva University, with an M.D. from Einstein Medical School, and a law degree from Yale. Muzin has been credited with introducing Cruz to key Jewish donors.

Asked about the observation that Cruz offers everything that Trump offers — without the craziness, Klein responded, “That’s a good way of putting it. Cruz is a serious man. You wouldn’t be embarrassed about anything if he was president.”

While Trump may speak “a strong game,” he hardly speaks a spiritual one. Cruz’s religious values, his passionate Christianity, are as vital to his support among traditional Jews as are Zionist values.

Supporters said his values have been reflected in something as simple as last December’s Chanukah message. In comparison to President Obama’s message, which they noted did not mention God or “the Islamic threat,” and described Chanukah as a somewhat generic “struggle for justice,” Cruz emphasized “God’s providence,” invoked the now-controversial “Temple in Jerusalem,” and spoke of Jews under attack from BDS, “anti-Semitic attacks in Europe, or radical Islamic terror … .”

Dennis Prager, a graduate of the Yeshivah of Flatbush and a self-described “serious” Reform Jew, argued in his weekly column that there is a need for a religious revival in political sensibilities. It is a new reckoning that is as much of Cruz’s campaign as a new economic reckoning is part of Sen. Bernie Sanders’. Prager wrote, “Do the inner-city kids who study the Bible and go to church each week lead wasted lives, join gangs, bear children out of wedlock or commit murder? … A godless and Judeo-Christian-free Europe has meant the end of Europe.”

Benjamin Jolkovsky, the Orthodox publisher of Jewish World Review, a Brooklyn-based online magazine sympathetic to Orthodoxy and conservative politics, told us via email, “For the majority of my closest associates, and fellow congregants at one of the largest shuls in Flatbush, there’s no question — they’re backing Cruz.” Not just for Israel but “his whole value system.” As for Trump, “When you have a person who publicly mocks someone with a physical handicap,” as Trump did to a handicapped journalist, “someone who would do that is at their core corrupt, possibly even evil.”

Jolkovsky added, Evangelical or Orthodox, “there’s going to be a natural affinity between people of faith [in terms of their religious characteristics and values]. A person who holds a minority view when the entire society, even the entire world, tells you that you’re wrong, that your values are outdated,” that is understood by another person of faith. They share values, “religious liberty; public education without [liberal secular] indoctrination; support for religious education; being pro-life,” even if Orthodoxy supports abortion in limited, life-threatening situations. Pro-life, says Jolkovsky, also extends to “how you support life beyond the womb,” and the value of that life.

Under the Democrats, said Jolkovsky, “it is increasingly common that a religious person is put on the defensive. There have been so many lawsuits and threatened lawsuits,” such as against a baker or photographer who declines to do business with a gay wedding, or on transgender matters; or regarding increased government oversight of religious behavior. “Liberalism used to be, you do your thing, I do mine. It’s not that way anymore. Its come to the point that a person of faith feels he has to justify himself … in a culture that doesn’t think [traditional] religion is justifiable. We’re at a transformative moment in American society when it comes to respecting religious choices.” Traditional Jews tend to see Cruz as someone who could be trusted when it comes to appointing judges or being sympathetic regarding government regulation.

This article was published by the Jewish Week and may be found here.

*DISCLAIMER: The Zionist Organization of America (ZOA) is sharing this article from a recent edition of the NY Jewish Week newspaper solely with its directors, donors and friends in order to share published quotes from ZOA president Morton A. Klein. No endorsement – real or implied — of any candidate seeking election to public office is intended by us sharing this article with you and the ZOA itself, aside from Mort’s comments, is not responsible for, nor is it the source of any of the content of the article. We note that Mr. Cruz officially declared his candidacy for national office only subsequent to his appearance at the ZOA event pictured here. As a 501(c)(3) not-for-profit organization, ZOA refrains from any and all activities that could be viewed as electioneering, as required by law.

We would love to hear from you! Please fill out this form and we will get in touch with you shortly.
Trending Z
News April 19, 2016
ZOA Condemns U.S. State Dept. & U.S. Amb. Nides For Siding with Antisemitic, Discriminatory Palestinian & Hamas Terrorists re: the Temple Mount, Violating Jews’ Religious Freedom
News April 19, 2016
ZOA’s Klein JPost Op-Ed: There is Nothing Extreme About Israel’s New Government
Uncategorized April 19, 2016
FLASH: ISRAEL-JORDAN PEACE TREATY (1994) GUARANTEES JEWS ACCESS TO THE TEMPLE MOUNT – LET MY PEOPLE PRAY
Uncategorized April 19, 2016
ZOA Analysis: Most American Rabbis Who Are Boycotting Some Israeli Ministers Are From Extremist Left Wing Groups (J Street; T’ruah; JVP)
Center for Law & Justice
We work to educate the American public and Congress about legal issues in order to advance the interests of Israel and the Jewish people.
We assist American victims of terrorism in vindicating their rights under the law, and seek to hold terrorists and sponsors of terrorism accountable for their actions.
We fight anti-Semitism and anti-Israel bias in the media and on college campuses.
We strive to enforce existing law and also to create new law in order to safeguard the rights of the Jewish people in the United States and Israel.
Our Mission
ZOA STATEMENT
The ZOA speaks out for Israel – in reports, newsletters, and other publications. In speeches in synagogues, churches, and community events, in high schools and colleges from coast to coast. In e-mail action alerts. In op-eds and letters to the editor. In radio and television appearances by ZOA leaders. Always on the front lines of pro-Israel activism, ZOA has made its mark.
Related Articles
OP-ED BY: Nathan Guttman Forward Article Quotes ZOA’s Mort Klein Remarks at D.C. Pro-Israel Rally